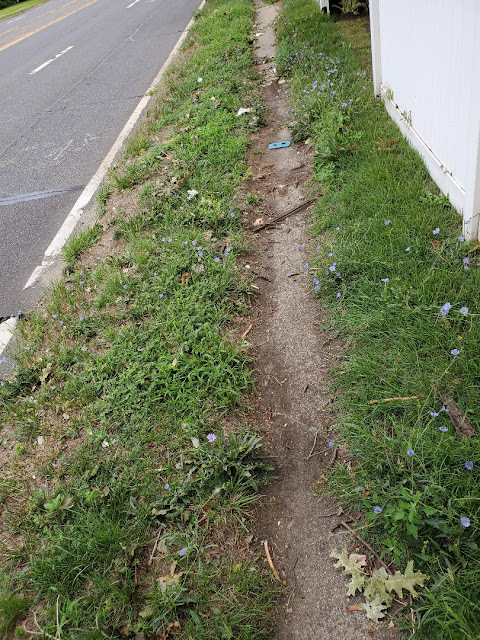 An Exercise in Futility?

It is a bit of an understatement to say that the year 2020 has been a depressing year.  The United States of America leads the world in COVID-19 cases and deaths.  My home state of New York, driven primarily by New York City, leads the United States in COVID-19 cases and deaths.  The nation is politically polarized by the protests that have broken out in the wake of the death of George Floyd in Minneapolis.  New York City is becoming depopulated and many storefronts are boarded up.  There's a sense that things are breaking down.  I know it has me feeling depressed.

But rather than succumb to hopelessness and despair, I feel the need to counter these feelings by striving, in ways however small and insignificant, to try and make a positive difference, however infinitesimal.  For example, whenever I am walking from my house to nearby stores, I will pick up litter such as empty bottles and plastic bags lying around and put them in a trash receptacle.  This is one of the easiest things to do because I can just do it.  It does not involve trying to persuade anyone else to take any action.

Now I have decided to try to take action to the next level.  I was inspired to try when I recently discovered two sections of public sidewalk on Old Country Road, one in Hicksville and the other in Plainview, that are in a serious state of neglect.  See for yourself:

This is a representative example of the state of the sidewalk on the north side of Old Country Road in Hicksville across the street from the PSEG facility.  The pavement has been overgrown with grass and other vegetation, and in some places the exposed concrete is barely wider than the width of a bicycle tire.  In fact, the overgrowth is so bad that you can even see it when you zoom in on a Google satellite map of the area. 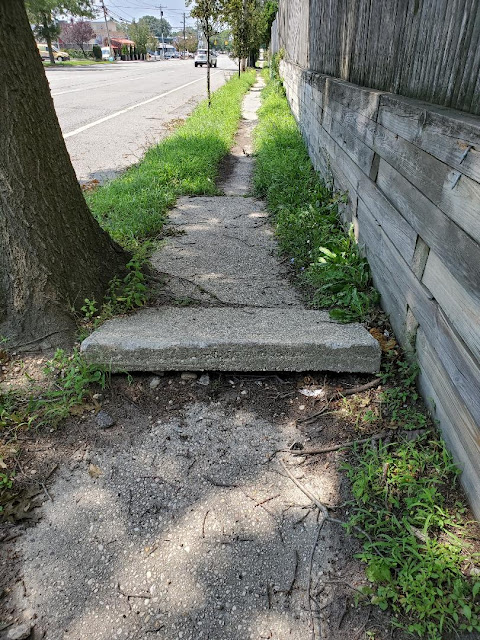 This section of Old Country Road in Plainview, again, on the north side of the road, is across the street from the Cravings deli.  In addition to the overgrowth, the large trees that stand along the roadside have uplifted entire slabs of sidewalk as seen in the photograph above.

What both of these sections of sidewalk have in common is that no homes or businesses face Old Country Road along their length.  Instead, the sidewalks are lined by the backyard fences of houses that face side streets north of Old Country Road.  According to the Town of Oyster Bay law on the duty to repair, maintain and keep sidewalks clear, "Each owner and occupant of any house...shall keep the sidewalk in front of the...house...in good and safe repair and maintain it in a clean condition and free from filth, dirt, weeds or other obstructions or encumbrances."  The law says nothing about homeowners being responsible for maintaining sidewalks behind their houses.  It would also be an onerous requirement, as just about any home that has a backyard facing a major road will have a privacy fence that prevents them from seeing the sidewalk, and none of them have gates that enable the residents to step out onto the sidewalk in order to be able to maintain it.

The responsibility for maintaining these public sidewalks must therefore lie with the appropriate local governmental body, which in both cases is the Nassau County Department of Public Works.

I have long been an adherent of Broken Windows Theory, which posits that if a neighborhood shows signs of physical decay and neglect, then it sends a signal to the population that government is unresponsive and does not care.  So, I decided, let's see if I can get Nassau County government to show that it cares by fulfilling what should be one of the most basic and simple responsibilities we expect of local government, maintaining a public sidewalk.  The uplifted sections of pavement alone I should think is a violation of the Americans with Disabilities Act, as a person in a wheelchair would not be able to use the sidewalk in its present condition.

What I have done to try to get the County to take action to repair these sidewalks is to write to the Commissioner of the Department of Public Works, the Nassau County Executive Laura Curran, and the two Nassau County legislators whose districts respectively cover the neighborhoods in which these neglected sidewalks are contained.  I sent out the letters this week, along with copies of the photos displayed above.  I estimate that it should take about two weeks to get written responses from at least one if not all of the parties that I have contacted.  I am not naive and I am under no illusion that the responses I receive will be along the lines of "Why you're absolutely right!  We will address this problem immediately!"  At a minimum, I would want the County to concede that it is an issue that needs to be rectified, with vague reassurances that someone is looking into it and will get back to me.  No matter what response I receive, I will continue to press the matter and insist that the necessary repairs and maintenance be carried out.

The name of this blog is Exercise in Futility, which is defined by Merriam-Webster as "an activity that is not successful or worthwhile."  Time will tell if this endeavor on which I have embarked will itself be an exercise in futility.

An Exercise in Futility?