The lineup of Redemptor includes current and former members of Decapitated, Vader, Hate, Sceptic, Sothoth, Banisher, Deivos, and more, which should be enough to attract your attention to their new album Agonia even if you hadn’t heard any of their previous works — which were the subject of NCS scribe Andy Synn‘s 93rd SYNN REPORT.

When Andy wrote in detail about the collective discography of Redemptor as it existed almost four years ago, he summed it up this way:

“Over the course of three albums and one EP the Polish quintet have steadily evolved their sound from the Schuldiner-esque strains of their debut album None Pointless Balance to the angular hooks and merciless precision of 4th Density and The Jugglernaut, with the process finally culminating in the gargantuan grooves and captivating atmospherics of last year’s utterly crushing Arthaneum.”

And now we have the band’s newest work,  Agonia. 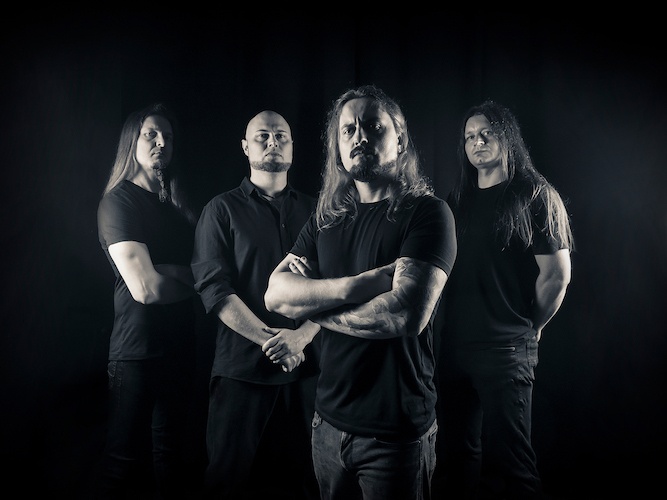 “Potion Of The Skies” was the album’s lead single. It was presented through an official video created by Chariot Of Black Moth. It provides a thundering and eerie amalgam of death-, prog-, and post-metal, packed with humongous grooves, a multitude of sinister, surreal, and scintillating guitar textures, and howling vocal vitriol. It does seem like a heart-pounding and head-spinning adventure into the skies — and then off the planet altogether.

Today we have another song from Agonia to present in advance of its December 3rd release by Selfmadegod Records. The name of the track is “Les Ruines De Pompei“, and its themes (which are both ancient and still relevant) have been described by the band’s vocalist (and the creator of Agonia‘s striking cover art) Michal “Xaay” Loranc:

“I could boast that not a groan or cry of fear escaped me in these perils, but I admit that I derived some poor consolation in my mortal lot from the belief that the whole world was dying with me and I with it. It’s hard to imagine the hell that unleashed over Pompei and Herculaneum. Especially if you consider that you’ve been there in 79 AD, with no mobile, fast car or army vehicles coming to save your ass… Well, there was a man, Pliny the Elder, commander of the fleet, who went to rescue people on the coast. There was no happy ending once he arrived there…

“His story has been the main inspiration for the theme. This song is a threnody for an individual, who realizes that there is no chance to escape from the jaws of a greater force. He chooses not to flee, holds the ground to write down his last thoughts with hope that his words will be found by descendants. It’s our dismal salute to all people who have chosen duty and responsibility over their personal chance of survival.”

As you listen to the song with these themes in mind, you will be transported to a long-lost time through the mesmerizing collage of the track’s ethereal opening notes, which are hypnotic and haunting. The music soon grows much more desperate and ravaging as tormented screams and shrill spiraling guitars rise up above plundering drums and an earth-heaving bass.

The sound is immense and immersive, with a dramatic sweep and a titanic impact. It jolts and jars the senses, creating an atmosphere of imminent and frightening calamity, but the ring of piano keys carries a mood of confusion and loss through that grand and disturbing tumult and all the savage snarls. The music softens, combining syncopated beats with ringing keys and macabre gasps, as if confronting its protagonist with a terrible decision.

The action resumes with livid, jabbing riffage that shake the spine, dismal slithering leads, and megaton booms, building toward a crescendo of intricately rendered and ultimately ravaging chaos. The sound is itself volcanic and laced with mad frenzy, but it equally fashions an atmosphere of tragic grandeur.

All in all, “Les Ruines De Pompei” is a remarkably multi-faceted piece, both viscerally powerful and intensely atmospheric, technically elaborate and soul-shaking — and a worthy rendition of its timeless themes of self-sacrifice in the face of daunting catastrophe and paralyzing fear.

Selfmadegod will release Agonia on CD, LP, and digital platforms. Pre-order info is linked below, along with that video stream for the tremendous “Potion of the Skies“.