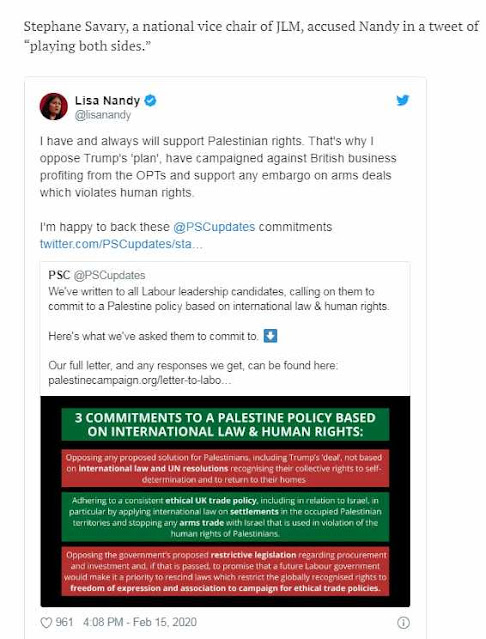 An Open Letter to Lisa Nandy, Who Went from Chair of Labour Friends of Palestine to Becoming the Zionist’s Favourite Pet

Is there anything more sickening than a politician who steps on the bodies of Palestinian children in order to build her career?

I thought it was about time that I wrote to an old friend, Starmer’s Shadow Foreign Secretary, Lisa Nandy. Because it is of general interest I have decided to share it with others but I would ask that you keep it confidential.  I don’t want our friendship to be derailed!!

The JLM's Mike Katz praises Louise Ellman, who has defended the torture and abuse of Palestinian children in the name of 'security' - Ruth Smeeth was very brave in lying to get Marc Wadsworth expelled

It’s not often that I agree with Stephane Savary of the Jewish Labour Movement, who accused Lisa Nandy of “playing both sides.” Just a day after saying, at a JLM hustings for Labour leadership candidates that she was a Zionist, Nandy agreed to sign up to 3 Pledges from PSC, including the right of return for Palestinian refugees.

If Nandy had understood what she said then she would know that a return of those who were ethnically cleansed in 1948 would spell doom for Israel as a Jewish Supremacist state. It would force Zionism to choose between a democratic state or an apartheid state. In practice the choice has already been made. Israel rules over 5 million Palestinians in the Occupied Territories yet refuses to grant them even the most minimal civil or political rights.

An Open Letter to Lisa Nandy, Who Went from Chair of Labour Friends of Palestine to Becoming the Zionist’s Favourite Pet