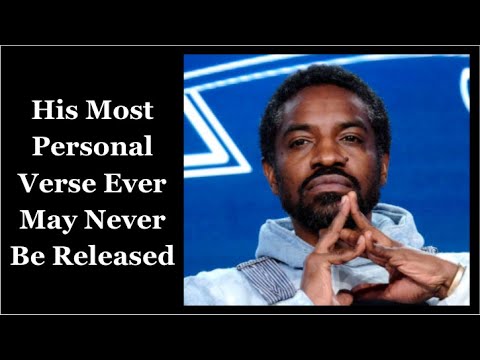 Andre 3000’s Most Personal Verse Has Been Liberated

Life is too short to listen to bad music. So…let Ambrosia For Heads sift through it for you and only supply you with that great stuff. Despite the reports, Hip-Hop is alive and well and, in many ways, it’s better than it’s ever been. Not only can we go back and listen to all of our favorites at the click of a button, but there is also a ton of great music still being made by artists, young and veteran alike…if you know where to look. To help with that task, we’ve created a playlist with recently released music. We update it regularly, so subscribe to follow us on Spotify if you like what you hear. Nearly three months after the song was first leaked, the official version of Kanye West's "Life Of The Party" featuring Andre 3000 has released. Ye's Donda Deluxe Edition release follows his two-part interview with Drink Champs. During the viral conversation with N.O.R.E. and DJ EFN, West explained lyrics that belong to "Life Of A Party," which address text messages surrounding his ongoing issue with Drake. Notably, it was Drizzy who leaked the song back in August—prompting Andre 3000 to release a statement, removing himself from any conflict between West and the OVO founder—two artists that the OutKast member says he is a fan of. Andre 3000’s Most Personal Verse Ever May Never Be Released The bigger story may be the guest verse. In arguably his most personal set of bars, Andre Benjamin raps, “Hey, Miss Donda / You run into my mama, please tell her I said, ‘Say something’ / I’m startin’ to believe ain’t no such thing as heaven’s trumpets / No after-over, this is it, done / If there’s a Heaven, you would think they’d let ya speak to your son / Maybe she has in the form of a baby’s laugh / I heard passing by in a stroller remindin’ me, ‘Hey, keep rolling’ / I don’t know, maybe she has with a prick of a blade of grass / I’ve been layin’ on way too long, got me itchy / Got up and roamed a lil’ more / Miss Donda, you see my mama, tell her I’m lost / You see, she’d always light a cigarette, we talk, I would cough / Exaggeratin’ a lil’ bit so she get the point / Try’na get her to stop smokin’, I would leave and fire up a joint / ‘Til I quit, started back up again, 20 years later / All that time, y’all thought a ni**a was high, thought I was crazy." That's merely the opening segment. He speaks to West’s late mother in hopes of communicating with his own—Sharon Benjamin-Hodo, who passed in 2013. In mid-September, Ambrosia For Heads' What's The Headline podcast unpacked the verse, and why despite not getting official release (at that time), it stands (alongside a Lauryn Hill guest verse) as the finest MC statement of 2021. That episode is available in video and audio, below: Andre 3000’s First 2 Songs Of 2018 Are In Loving Tribute To His Mother (Audio) The deluxe version of Donda also includes alternate versions of several songs, including a new verse from Kid Cudi. Production on "Life Of The Party" is credited to Ye, former fellow Roc-A-Fella beat-maker Brian "All Day" Miller, early Common mentor Twilite Tone, Fonzworth Bentley, Dem Jointz, and more. You can hear additional selections from Kanye West's Donda on the official AFH playlist, as well as new music from Joell Ortiz, Big Sean, Stalley & Apollo Brown, Planet Asia, Ransom & Rome Streetz, Young Thug, Meek Mill, Atmosphere, Lauryn Hill, Mick Jenkins, and Rapsody, among others.
Source: ambrosiaforheads.com

Andre 3000’s Most Personal Verse Has Been Liberated