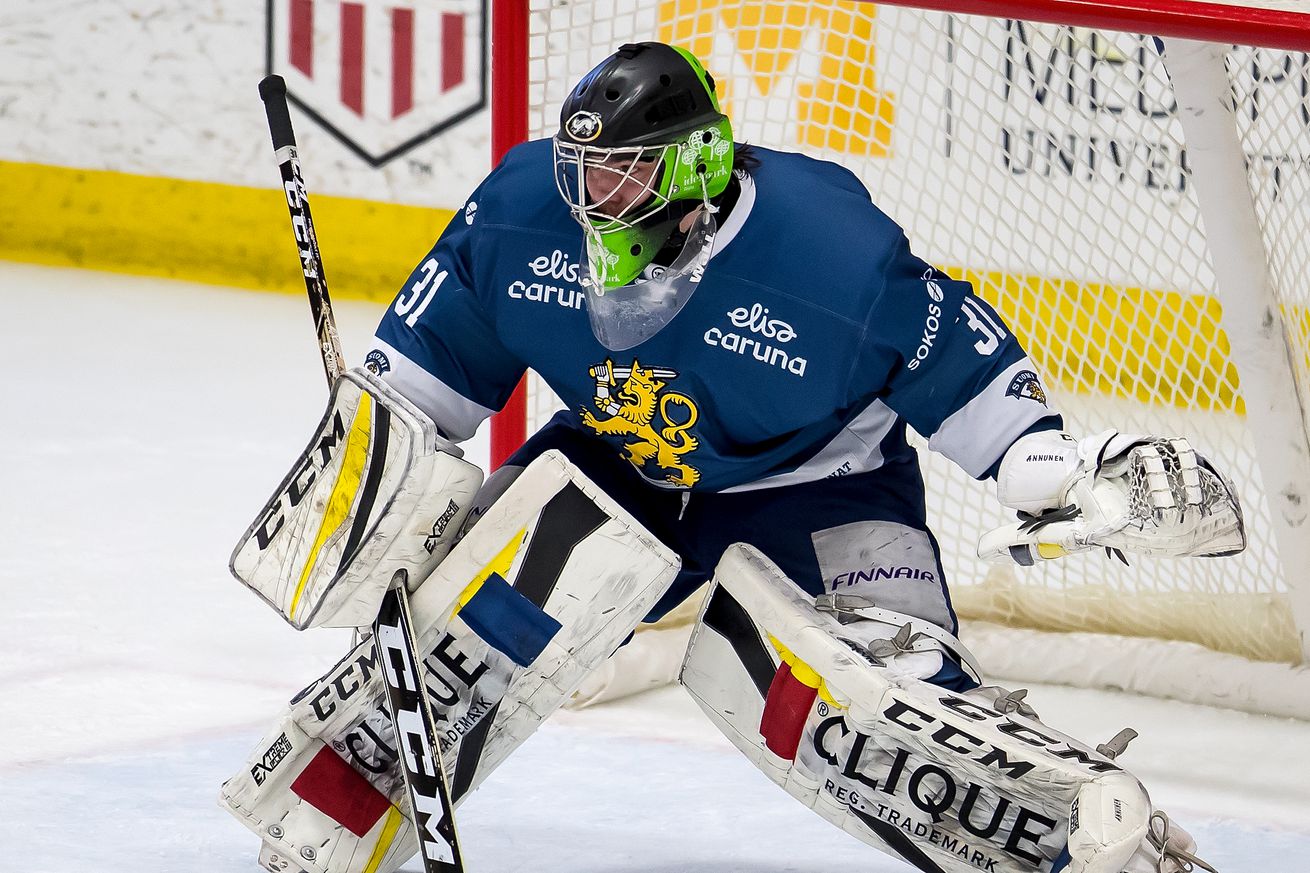 The Top 25 Under 25 is a collaboration by members of the Mile High Hockey community. Eight writers and 320 readers ranked players under the age of 25 as of September 1, 2018 in the Colorado Avalanche organization. Each participant used their own metric of current ability and production against future projection to rank each player. Now, we’ll count down each of the 25 players ranked.

He’s been turning heads recently with his play at the World Juniors Summer Series for Team Finland, where he most recently put up an effective (if rather easy) performance during Finland’s routing of Team Canada on Wednesday. He wasn’t challenged much, but managed to still make the easy stops — with that ‘calm, big’ presence that fans seem to love so much — to ensure that Finland took home the win.

The calm aspect of his game is probably his biggest asset. Trained by Finland’s Ari Hilli in the Kärpät system for the last handful of years, he’s been steadily shaped into a goaltender who can measure his depth well and rely on active hands rather than overly acrobatic recoveries.

His biggest concern, though, has been that his ‘big, calm’ presence isn’t just a confident demeanor. His coach cited conditioning as a big area for improvement last summer, and he could still use a little work elevating his off-ice training to help him handle messier, more tiring games and workloads; when things don’t go well in front of him, he can sometimes tire easily and he doesn’t have the same explosive element to his game that so many goaltenders his age tend to rely upon. While his tracking and positioning game exceeds that of many of his peers, his natural agility and high-gear desperation game could still use some work.

Although he failed to make the U20 roster for the World Juniors this past year, the mantle has been confidently passed to him now — and he’s been taking it in stride. He got his second Liiga game this year after getting his first look in his draft-eligible season, but graduated from the U20 JR. A league in Finland to play instead for Hermes in Finland’s Tier-II Mestis division for the regular season. Then, when he returned to his age-appropriate U20 program for the playoffs, he cleanly routed everyone with a .930 save percentage and just a 1.5 Goals Against Average through six postseason appearances.

Mathias Laferriere with a fantastic chance in the 3rd. #WJSS pic.twitter.com/mRES0gkIA7

It was clear that this last season was a massive learning curve for the 19-year-old Kemepele native, but he handled the pros well and it’s clearly paying off when we see him against other skaters his own age at the Summer Series right now. Had he stayed on the U20 roster last year, it likely would have been very little challenge — and he would have needed this year to adjust to the pros anyway before hitting his stride, setting his development back by a season. Finland has done a good job of quietly churning out some effective goaltenders in the last handful of years, and he’s yet another example of this.

Next season is going to be a big one for Annunen, who is slated to be the number two behind former Detroit prospect Patrik Rybar for the upcoming season. Rybar returned to Europe after a year with the AHL’s Grand Rapids Griffins, so it’s safe to assume that the older — and more experienced — Slovakian netminder is expecting to get the bulk of the starts for Finland’s Kärpät.

That gives Annunen a fairly pressure-free year, with a chance to continue to improve his game at the highest level while opening up the chance to be granted leave for the U20 World Juniors without hanging his team out to dry in his absence. His numbers last year weren’t incredible, but he won’t even turn 20 until March of this upcoming year — so while there are still those conditioning steps that need to be taken and some development to work on, he’s in a phenomenal spot.

Don’t expect him to make his way over to North America just yet, but it’s good news that he’s already in a comfortable position to transition to Liiga play full-time next year at just 19. Unless his development severely stalls out this year, that opportunity combined with his impressive showing in the Summer Series so far will up his likelihood of starting for Finland at the World Juniors in the winter. If all goes well, Colorado could have him ready to transition to North America in another year or two’s time with little difficulty.