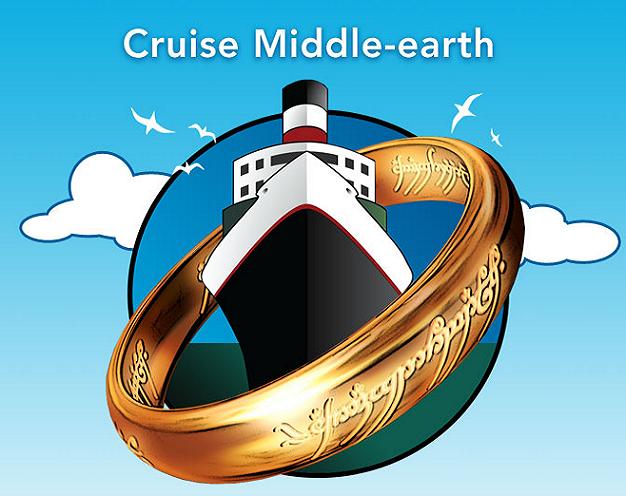 Announcing the Third Cruise to Middle-earth!

After a successful Cruise to Middle-earth in November of 2008, and a sequel cruise in December 2012, it is time to complete the Trilogy. This Journey to Middle earth starts on January 2, 2023, in Sydney, Australia as you board the Celebrity Eclipse, and runs 12 nights long, ending in Auckland, New Zealand on January 14, 2023.  This is not a LOTR convention at Sea, but more of a Mobile Middle-earth Moot where we get to see the real-world Middle-earth while enjoying the benefits of a luxurious cruise ship.

This 12-night cruise will take you to such filming locations as Hobbiton and Edoras, with the option to visit the WETA Workshop in Wellington on a private tour. Other ports visited will be Melbourne, Dunedin, and the Bay of Islands. And for those choosing to arrive in Sydney a few days early, you will be able to celebrate the New Year’s Celebration near the Sydney Opera House and the Harbor Bridge for fireworks (not included, but I can assist in securing a hotel and flights).

Once the cruise is finished, there will be an optional 2-night post-cruise stay in Auckland so that we can experience WETA Unleashed, and have a farewell dinner in the restaurant at the top of the Sky Tower in Auckland, and have a private tour and dinner in Hobbiton. This allows folks to choose a Cultural or Geological tour option in the port of Tauranga (Rotorua) rather than Hobbiton from the ship, which will be rather short and bunched together with other cruise passengers that might not be as geeky as those in our group. If you choose this post-cruise tour, there will be an additional cost, and you will need to remain in New Zealand at least until January 16, 2023.

If you choose to arrive on the morning of the cruise, you will have to depart North America on December 31, 2022, to arrive by January 2, 2023, or you can depart earlier and spend a couple of days in Sydney. If you wish to be in Sydney for the actual New Year’s celebration, you will want to depart North America no later than December 29 for a December 31 arrival. For those interested parties in Europe or Down Under, the time difference will affect you differently.

I am arranging an exclusive day tour to visit with WETA in Wellington for us when the ship is in port, which will include a private workshop. There will be a motorcoach to pick us up just outside the port area in the morning and take us over to Miramar to tour the facility, taking in not just LOTR projects, but some of the many other film projects WETA has worked on over the years. This will be topped off with a hands-on workshop on crafting leather and chain maille armor before the motorcoach will take us back to the city center for a self-guided tour inside the Te Papa Museum. You will not want to miss Te Papa, besides it being a world-class museum, there is a Gallipoli exhibit created by WETA that must be seen to believe, and the museum is free. We will then make our own way back to the ship before it departs.  This tour can be purchased as a customized package not included in the cruise fare. A quote will be available shortly.

On the ship, there will be a few days at sea, with no port stops, so I’ll be planning a few group activities that you can choose to join or not, depending on whether you would prefer to go to the spa or partake in other Ship Hosted activities. There will be a Tolkien Toast on January 3, 2023, to commemorate the Professor's birthday, and then there will be a few games and group discussions, and maybe singing along to some of Tolkien's songs found in the books. And this cruise takes place just a couple of months after the Rings of Power airs, so lots to discuss and maybe an additional location or two to be seen. For those of you with Middle-earth costumes, feel free to bring them, especially if they are on the lighter side, for packing purposes. There will be a Costumed Cocktail reception, and for those without costumes, a geeky t-shirt will suffice. The bonus is that you can also wear the costume either in Edoras or Hobbiton or bring two costumes and do both.

The nitty-gritty information for this group is that it has been on sale for several months, so some room types are no longer available. The Cruise pricing fluctuates regularly, based on available discounts for persons who qualify (past passenger, Senior or military rate, etc.) and just what rooms are still open for booking. An interior room right now is starting at $2179 per person, a Balcony room starts at $2429 per person and a Concierge Balcony (more perks) starts at $2869 per person. The private tour to WETA during the ship’s port stop in Wellington will have its own price, to be finalized very soon, and the customized 2-night post-cruise tour in Auckland to Hobbiton and other activities is currently priced at $1170 per person, but that will go down with a few more people booked into the group. There is a small planning fee of $50 per person if booked by May 31, and then it goes up to $100 per person on June 1.

To make an inquiry, please contact me at Garfeimao@TheOneRing.net

Announcing the Third Cruise to Middle-earth!