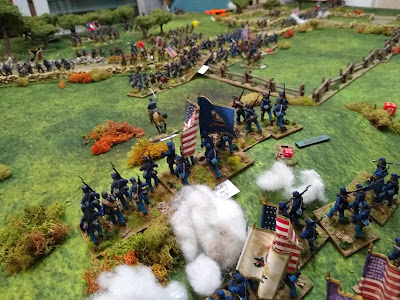 Yesterday Martyn, Nick, Steve and myself met up at mine to play the Antietam: Attack on the Bloody Lane scenario for the Pickett's Charge rules.
Martyn and I played the Union attackers while Steve and Nick the Confederates.
We were using all my stuff so I was able to set up the table and sort out the two forces before everybody arrived. 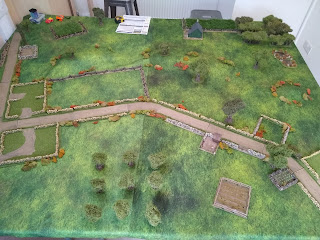 We would be using the Fog of War rules for the first few turns so that table was not that photogenic with bits of paper all over it, the photos of the action are from when most of the troops were deployed.

Martyn and I placed Kimball's brigade in reserve on the right flank and attack with the remaining troops across the line.

Some spirited defensive fire from the Sesesh and abysmal Brigade Command rolls from the Union meant that the attack struggled to make headway, and the most opportunely deployed and miraculously good shotted Confederate battery on their left made short work of Kimball's flank attack with both Union brigades on that side in much disarray.

On our right, the Confederates were so confident they even started counter attacking us, but a spirited charge from the 81st Pennsylvania restored the situation.

Weber's brigade secured a foothold in the sunken lane at great cost to themselves and with Rode's veterans poised to push them out, we called a Confederate victory and went for a pint, or two, at the pub.