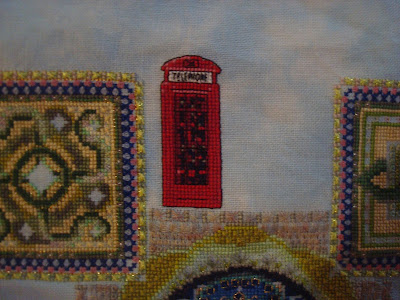 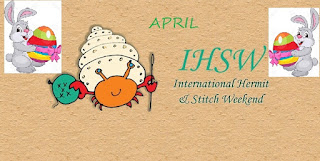 IHSW or International Hermit and Stitch Weekend always starts on the third Friday of the month.  It's a chance to lock yourself away and focus on your stitching for the weekend.  You can take part on your blog or via the Facebook page - IHSW on Facebook.

The third Friday is also the Friday Night Sew In or F.N.S.I. which Kaye introduced me to.  You can find out more about it here - Sugarlane Designs
Friday was my first day back at work since Christmas Eve so that curtailed the stitching time dramatically!  I did put a few stitches in on my current Just Nan Band Sampler.  This is Nan's Garden: 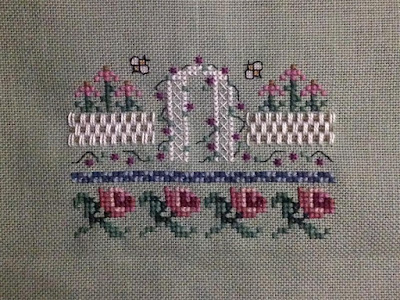 stitched on 28 count green linen
(I must try get a better photo of the fabric!)
At bath-time I managed to complete my second Autumn Lane Stitchery design.  This is Mrs "Large Hat" Claus! 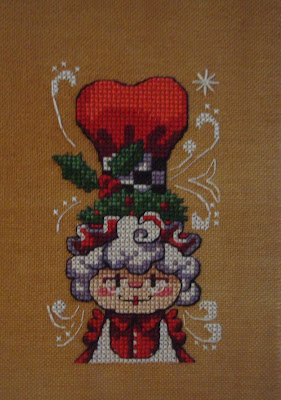 stitched on 28 count tea-dyed evenweave
The rest of the weekend was a little bit more productive.  I focused on my Chatelaine Gardens of London and completed a phone box.  One down, three to go!  In true Martina style, there are four different shades of red, and three different colours to make the windows.

stitched on 32 count Cotton Clouds from Crafty Kitten
The next IHSW will be 21st - 23rd May so make sure you note the date in your diary or come and join us in the Facebook Group - IHSW on Facebook. If you don't do Facebook then you can check in here by leaving a comment on my post.
Finally, it's time to reveal the Mystery Phrase from my Easter Treasure Hunt Blog Hop.  I wanted a phrase which would include the word in the project I was stitching which was this one: 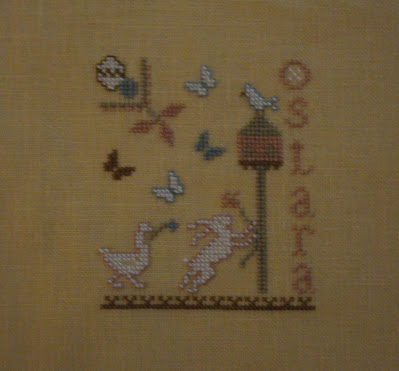 stitched with one strand on 35 count cream linen
This is Ostara by The Primitive Hare, one of a series of 8 Celtic Celebrations, all found here - Primitive Hare Freebies

Now, "celebration" was too long a word so I used "solstice" instead.  I sent out all the emails with the letter and laying in bed that evening suddenly thought "it's not a Spring solstice, it's a Spring Equinox".  Whoops, too late to change now.

Everyone did indeed find the phrase
"Spring Solstice of Ostara"

You can learn more about Ostara here.
I plan to stitch all eight of these and frame them together which is why I chose 35 count linen, so they will fit in a frame I already have.  Frugal framing!
Source: serendipitousstitching