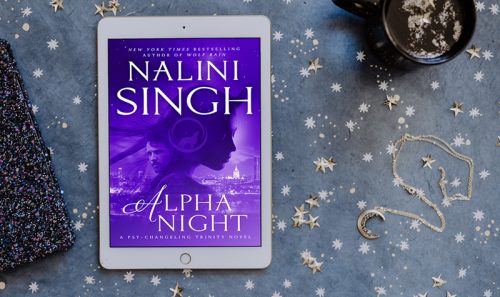 “…having a strong female as the Alpha was refreshing and added an interesting dynamic that I’d love to see in more romances.”
~ Under the Covers

Does anyone else feel like they have been waiting for this book for a while? Selenka Durov, the Alpha of the Russian BlackEdge pack has been a vague presence in this series almost from the very beginning. The BlackEdge pack is the biggest and most powerful wolf Changeling pack in the world and we are finally getting to see them. In Alpha Night Selenka and damaged Arrow Ethan Night are thrown together as a conference they are both attending gets attacked. Then, something unique happens. Mating at first sight.

Nalini Singh has many talents, and one of those is writing alpha females and Selenka is THE Alpha. I loved how uncompromising and openly alpha she was. She loved and protected her pack and they adored her for it. Ethan Night is part of the Arrows…yet separate. He doesn’t trust anyone, including the Arrow squad who saved him. He was an intriguing character, like a lot of Singh’s heroes, especially her Psy heroes, he was fundamentally broken by his treatment under the sadistic Silence regime.

I am not spoiling this book by saying they had a mated at first sight connection, it states this in the official blurb. It’s interesting as this is a trope that Singh hasn’t ever really used. One of the aspects of the Psy-Changeling series I have always liked is that the fated mates concept isn’t infallible, it’s a choice that, usually, the female has to make to accept the claim. But, of course, although in Alpha Night there is an instant matedom, it isn’t quite insta-love, the mating is presented as a complication in the formation of their relationship. However, there were times it did skirt a little too close insta-love; Ethan felt like a baby duck who had imprinted on to Selenka.

What this series, and this book does well, which you don’t always see in other shifter romances, is show how the pack dynamics work and the interactions between the pack. Rather than a book telling you how important pack and being Alpha is, this book really shows you how entwined Selenka, as Alpha is to the pack and how the pack is fundamental to her. As well as being one of the forces working on the romance between Ethan and Selenka, it further detailed the world that Singh has been constructing since Slave to Sensation. It’s why picking up these books is liking coming home, we know the world intimately and it keeps on building up.

Another great book in the series, the romance was adorable and having a strong female as the Alpha was refreshing and added an interesting dynamic that I’d love to see in more romances.

I've been writing as long as I can remember and all of my stories always held a thread of romance (even when I was writing about a prince who could shoot lasers out of his eyes). I love creating unique characters, love giving them happy endings and I even love the voices in my head. There's no other job I would rather be doing. In September 2002, when I got the call that Silhouette Desire wanted to buy my first book, Desert Warrior, it was a dream come true. I hope to continue living the dream until I keel over of old age on my keyboard.

I was born in Fiji and raised in New Zealand. I also spent three years living and working in Japan, during which time I took the chance to travel around Asia. I’m back in New Zealand now, but I’m always plotting new trips. If you’d like to see some of my travel snapshots, have a look at the Travel Diary page (updated every month).

So far, I've worked as a lawyer, a librarian, a candy factory general hand, a bank temp and an English teacher and not necessarily in that order. Some might call that inconsistency but I call it grist for the writer's mill.