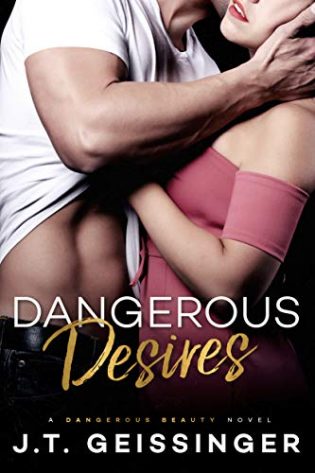 “I loved all the action, suspense, and the banter between the characters. Geissinger’s storytelling is never dull.” ~ Under the Covers

This book picks up right after the last installment when Eva turns herself over to her mobster ex-lover to keep Naz safe. With a few turns of events, Eva ended up kidnapped instead. Yes, the plot thickens. Of course, with the help of Naz’s friends, they can locate her and initiate a rescue. As if Naz was going to let or go just like that. Silly girl.

Unfortunately, getting Eva back will not be that easy. Turns out, the situation with Eva’s Ex is more complicated than they thought. I love the introduction of this discovery as well as an introduction to a new character. Let me tell you, Killian knocked me off my feet and I’m sure he couldn’t help it, but his character was fighting lead position in this book. Okay, fighting for a place in Eva’s heart too.   This guy is gem.

Don’t get me wrong, Eva and Naz still took the front page. I love their dedication to each other no matter the cost. It was really sweet. There was a tug and war of alpha male vs. I-am-woman-you-can’t-control-me situations, but the story tells you the reasons for it all.

You do see other characters from this series and it’s lovely to get more of their HEA. They add a whole lot of dimensions to the story. The verbal duel between Killian and Naz had me laughing out loud. Killian knew exactly how to get under Naz’s skin and it was all entertaining to witness. I’m pretty sure fans of this series will be requesting for more Killian page time. Perhaps, even his own books.

I loved all the action, suspense, and the banter between the characters. Gessinger’s storytelling is never dull. I recommend this series to light romantic suspense fans.

J.T. Geissinger’s debut novel, Shadow’s Edge, was published in 2012 and was a #1 Amazon US and UK bestseller in fantasy romance and romance series. She has been nominated for the prestigious RITA® award from the Romance Writers of America for best paranormal romance for her second book in the Night Prowler series, Edge of Oblivion.

A life-long lover of reading and a self-professed “book addict,” she didn’t realize her dream of writing a novel until a milestone birthday forced her to take stock of her goals in life. Always believing the right time to commit to putting pen to paper would magically announce itself, it took waking up one cold January morning with a shiny new zero as the second number in her age to kick start her determination.
Starting on that very day, she wrote what would become Shadow’s Edge in a little over four months and submitted it to several literary agents. Nothing happened. Thinking that was the end of that but by no means willing to give up on her dreams of being published, she began work on a second manuscript.
Then, during a trip to Italy in honor of their 10th wedding anniversary and the honeymoon she and her husband never took, she received an email that would change her life. It was from an agent, Marlene Stringer of Stringer Literary, and it contained the three words every aspiring author longs to hear: “I loved it.”

Marlene sold the manuscript to Montlake Romance who published it six months later. Hitting the #1 Amazon bestseller lists within weeks of publication, Shadow’s Edge was book one of the Night Prowler novels. Book two, Edge of Oblivion, was published in October 2012 and will be followed by Rapture’s Edge in June 2013, and Edge of Darkness in fall 2013. There are six books total planned for the series.