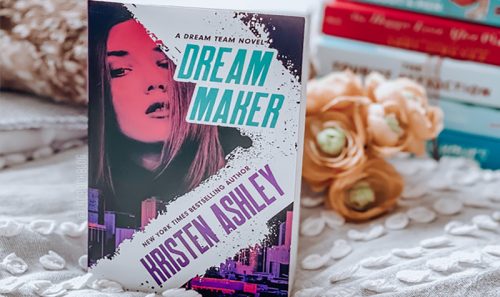 Evie is a genius, give her an engine, she can pull it apart and put it together better than it was before. Give her some numbers, she is queen. Which is why there is only one reason that she has two jobs, a stripper and tech support, to pay her rent: her deadbeat family. Only this time they’ve asked for too much, forcing her in way over head into the underbelly of Denver. Evie never expected that Daniel “Mag” Magnusson to step in and protect her. Mag is an alpha male commando and man who saw her nearly knock herself out by being a klutz on their first (and only) date, the last thing she expected was for him to step up. But, now she has Mag and a team of commandos as well as her girl posse at her back, all Evie has to do is accept their help.

I’ve been a big fan of Kristen Ashley for a long time, especially when it comes to her older series, like Colorado Mountain, the ‘Burg, Dream Man and Rock Chicks. This book felt like vintage Kristen Ashley, with a heavy Rock Chick vibe i.e. lots of crazy kidnappings and male and female camaraderie. And Tex. Only in the Dream Team series we have a new set of girls: the strippers from Smithie’s club and a new set of guys: the commandos who work for Hawk.

I am referencing a lot of characters and places that are part of the Ashleyverse and if you’ve never read any of her series you won’t be aware of Smithie’s history or who Hawk or Tex are. Does this mean you can’t read DREAM MAKER? No, the romance itself doesn’t require any knowledge of the characters and places that Ashley has created. However, I can’t deny that having that knowledge of the Ashleyverse does lend a certain richness and warmth to the story. It felt like visiting a group of old friends you haven’t seen in a while.

But there was one major difference between this book and the Rock Chick series: the level of alpha maleness. Mag is an alpha hero for the modern age; he takes a command of situation, and yet somehow does not do it in such a way that it doesn’t takes choices away from the heroine. I both loved this and didn’t. I missed Ashley’s hyper masculine OTT alpha heroes, they used to drive me crazy and yet I adored them. That’s probably just me being contrary though, Mag was a great hero and I loved the care he took with Evie.

In fact, I loved the whole romance between Evie and Mag, from the start you could feel the pull of attraction between them. From there it follows the fairly standard Kristen Ashley template: move in together immediately due to bad guys gunning for the heroine. But, just because I’d read it before, that didn’t mean I didn’t enjoy it. Mag and Evie were cute together, not to mention hot as hell.

However, the relationships that I really enjoyed seeing in this book were the female friendships. It is something that was done really well in the Rock Chick series and Kristen Ashley continues this tradition in the Dream Team series. Our new gang of girls, the Dream Team, all support and encourage each other with unfailing loyalty; whether it’s helping to buy sex shoes or plotting to escape when kidnapped. Female friendship is an important part of most women’s life and I love it when this is demonstrated in romance novels; after all, who else but your girls would you talk to about a new relationship?

Absolutely loved this book, it managed to feel like vintage Kristen Ashley with a twist of modernity. A brilliant start to a new series and I can’t wait to read the next book.

Kristen Ashley was born in Gary, Indiana, USA. She nearly killed her mother and herself making it into the world, seeing as she had the umbilical cord wrapped around her neck (already attempting to accessorise and she hadn't taken her first breath!).

Kristen grew up in Brownsburg, Indiana but has lived in Denver, Colorado and the West Country of England. Thus she has been blessed to have friends and family around the globe. Her posse is loopy (to say the least) but loopy is good when you want to write.

Kristen was raised in a house with a large and multi-generational family. They lived on a very small farm in a small town in the heartland and existed amongst the strains of Glenn Miller, The Everly Brothers, REO Speedwagon and Whitesnake (and the wardrobes that matched).

Needless to say, growing up in a house full of music, clothes and love was a good way to grow up.

And as she keeps growing up, it keeps getting better.