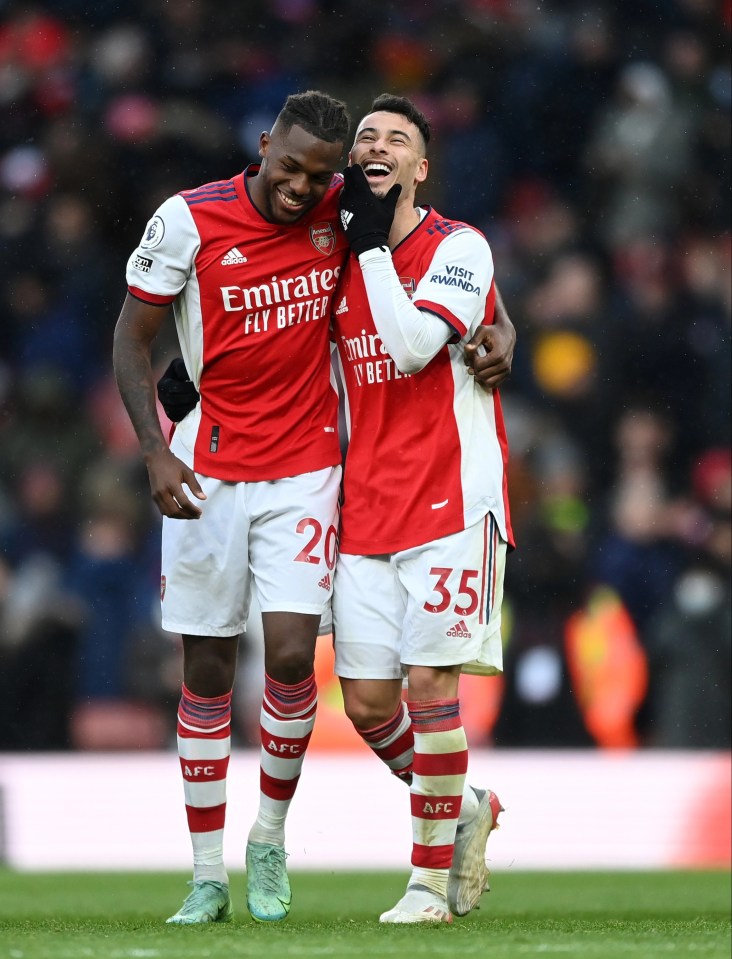 IF Arsenal fans were surprised to see Nuno Tavares starting ahead of Kieran Tierney at Anfield last week, they were probably stunned to see the Portuguese youngster still in the team this afternoon.

For while Tavares had been the man in form ahead of the Liverpool game, the same could not be said of him now.

It was his horrendous error which had led directly to Liverpool’s killer second goal and condemned Arsenal to their first defeat in 11 games.

So most Gunners supporters assumed that Tierney would finally be restored to the starting line-up after a month out of the Arsenal action.

The Scottish full-back had been sidelined by an ankle injury prior to the recent international break but proved his fitness by completing both of his country’s World Cup qualifiers.

But boss Mikel Arteta decided that Tavares had done nothing to warrant being left out for the Liverpool game.

And maybe he didn’t want to damage the 21-year-old’s confidence by dropping him as a direct result of his Anfield blunder.

He also probably reckoned that Tavares would have a lot less defending to do against Ryan Fraser and Emil Krafth than he’d faced from Mo Salah and Trent Alexander-Arnold.

Haaland names seven strikers better than him including Aubameyang & Kane

And that was certainly the way it worked out against struggling Newcastle as Tavares spent far more time going forward than he did protecting his own area.

Trouble was that for all the promising positions he got into, his decision making still left so much to be desired.

One attempted cross was volleyed straight into touch when the ball had been heading out for a corner.

And a couple of highly ambitious shots posed more danger to the punters in the Clock End than they did to Newcastle keeper Martin Dubravka.

So when he sliced another cross into the crowd the fans were not slow to let him know what they thought of his efforts.

He was hardly helped by the fact that Arsenal were struggling to open up a team they had been expected to steamroller.

But no-one was complaining ten minutes into the second-half when Tavares’ cute reverse pass set up Bukayo Saka for the breakthrough goal.

The former Benfica defender’s heart would have been in his mouth when he barged Callum Wilson over as they battled for possession.

But Newcastle’s penalty appeals were waved away by referee Stuart Attwell and seconds later sub Gabriel Martinelli scored with his first touch to put the result beyond doubt.

Whether Tavares has done enough to keep his place for Thursday’s trip to Old Trafford remains to be seen.