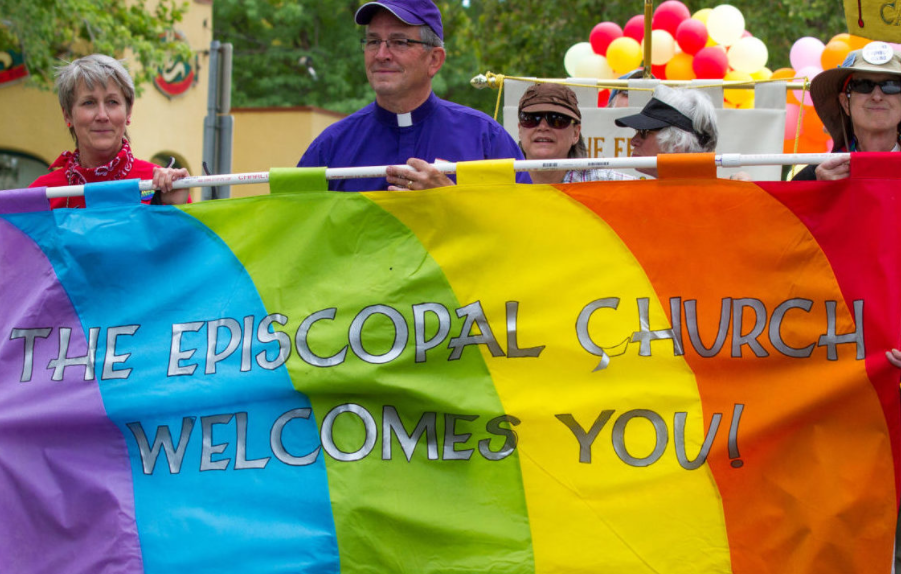 As TEC Goes, So Goes GOA

In response to a recent article at Monomachos, a woman named Lina writes, “So, what I don’t get, as an ex-Episcopalian who has watched her cradle church go down the drain over the last several years after espousing the homosexual agenda, is that the GOA (Greek Orthodox Archdiocese) is dead set to follow the same path.” I don’t get it either. That perplexed sentiment resonates with this sad ex-Episcopalian. My own frame of reference with the Episcopal Church started with baptism as an infant in 1954. I was confirmed in 1967, when national membership peaked at 3.6 million members, and then observed the decline over the years that ensued.

Here are some of the more noteworthy of the last half century’s hits (i.e., assaults) on TEC, perhaps best spelled out as Today’s Episcopal Clique. The moral relativism that made it possible was expressed in the widely-read book Situation Ethics (1966) written by ex-priest Joseph Fletcher. There was the suicidal apostasy in 1969 of the prolific author Bp. James Pike. The infiltration of the homosexual indoctrination at General Theological Seminary was made possible by Prof. Norman Pittenger in the same godforsaken decade. These were just some of the men who planted the seeds of Satan into Episcopal Church soil at the apogee of its growth and influence.

Three of the “Philadelphia Eleven”

The contra-canonical ordination of the Philadelphia Eleven women in 1974 portended more radical actions to come. The newfangled Book of Common Prayer in 1979, the newer Hymnal of 1980 became the basis for a smorgasbord view of sacramental rites. Then came the shocking consecration of suffragan bishop Barbara Harris (an unqualified divorcèe) in 1989 and the earth-shaking consecration of diocesan bishop Vicky Imogen Robinson (a gay man) in 2003.

The contra-canonical ordination of the Philadelphia Eleven women in 1974 portended more radical actions to come. The newfangled Book of Common Prayer in 1979, the newer Hymnal of 1980 became the basis for a smorgasbord view of sacramental rites. Then came the shocking consecration of suffragan bishop Barbara Harris (an unqualified divorcèe) in 1989 and the earth-shaking consecration of diocesan bishop Vicky Imogen Robinson (a gay man) in 2003.

Membership in the Episcopal Church has fallen by more than half since its peak in 1967 to a meager 1.6 million today. Of the two million lost over that era, 314,000 were lost in the “twenty teens” (2010 – 2019). Chalk up half of that loss to the general vacating of church pews nationwide. Chalk up the other half to TEC’s revisionist abandonment of Scripture and Tradition while maintaining the outward trappings of religiosity. “Having the appearance of godliness, but denying the power thereof” (II Tim. 3:5). This may be termed the “revolution within the form”. Distrust by the laity of the ever-innovating leadership doomed them. It is my sad observation that the “new and improved” Episcopal Church has squandered its rich Anglican patrimony over the period of my lifetime.

Scroll Down to Continue

Now, to Lina’s assertion about the Greek Orthodox Archdiocese. Having watched the TEC “go down the drain”, the GOA is “dead set to follow the same path.” She is puzzled by that. Why are the GOA leadership headed in the same direction? That is the $64,000 question. I doubt whether the GOA has done any serious research into the demographic decline of TEC. Even if they have, they will probably scoff at the precipitous drop in TEC’s numbers. If they look for reasons, they may cite the general decline in church attendance across the nation. They may blame the phenomenon on the ignorance of the unsophisticated masses. But, I wouldn’t be surprised if the decline of the TEC hasn’t even registered on the GOA radar. If they had recognized that association with the TEC is a losing bet, why would Elpidophoros have made nice with that heretic Dean Wolfe at St. Bart’s in Manhattan? The celebration of the Divine Liturgy at that parish and the return visit to “talk story” with Bp. Wolfe are indications that Elpi. feels a need to get cozy with the heterodox. Or maybe he was just impressed with the Byzantine architecture and the smell of success at a parish with a reputation for the “queering of Manhattan”.

Here are some rounded figures from the OrthodoxReality.org study entitled “The Greek Orthodox Archdiocese of America (GOA) from 2010 to 2020: Changes in Parishes, Membership, and Worship Attendance”. Across the archdiocese, membership has declined from 482,000 to 376, 000 – a loss of 22%. More telling is the reduced number of regular participants over that decade, from 107,000 to 86,000. Again, a decline of about 22% from 2010 to 2020. One can surmise that the decline in GOA has only accelerated during the pandemic by the leadership’s demand for strict adherence to government health mandates. These have gotten parishioners used to the idea of staying home and watching church in their pajamas from the comfort of their living room couches.

Maybe Abp. Elpidophoros doesn’t worry about the drop in the number of derrières in pews as long as the archdiocese can keep the cash rolling in. And as long as Pat. Bartholomew’s quota is redirected to Istanbul. My experience on a GOA parish council the last two years of the pandemic confirmed the suspicion that our metropolis was mostly concerned that parish assessments would still get paid despite the crisis. Our assessments for this year roughly equal the total amount of our stewardship contributions from last year. Without another source of income from real estate, our parish budget would not end up in the black.

Speaking of money, what happened to the $100,000,000 that got poured into St. Nicholas’ black hole at the World Trade Center? It’s been more than twenty years since 9/11, but construction on the little church isn’t even finished yet. Oy vey.

Abp. Elpidophoros is a gracious and approachable hierarch, so during a small gathering here two years ago, I felt free to challenge him on some of the salient issues. Whether it was the contention of Constantinople’s supremacy among Orthodox hierarchs or the intervention in Ukraine’s ecclesial organization, his retorts indicated to me that he will not change his mind. Outright endorsement of the queer sexual revolution may still be out of reach for them, but certainly Bartholomew and Elpidophoros seem to be dead set to continue their promotion of other so-called progressive concerns such as ecumenism, environmentalism, and Covidism. Just like the proud Episcopalians, they will not …and that auxiliary verb must be read with emphasis… i.e. they willfully will not revise their trendy agenda despite how disastrous it will likely turn out for them. They will not cease and desist their grasping at global ecclesiastical power to promote it, so help them God.

Maybe Elpidophoros and Bartholomew just cannot change their minds. And, maybe the rest of us are simply fools to pray that they will be able to change. If that is true, it doesn’t make me happy to say that the continued decline in GOA’s membership is likely to be unavoidable.

Originally published at Handwritings on the Wall

The post As TEC Goes, So Goes GOA appeared first on Orthodox Reflections.

As TEC Goes, So Goes GOA