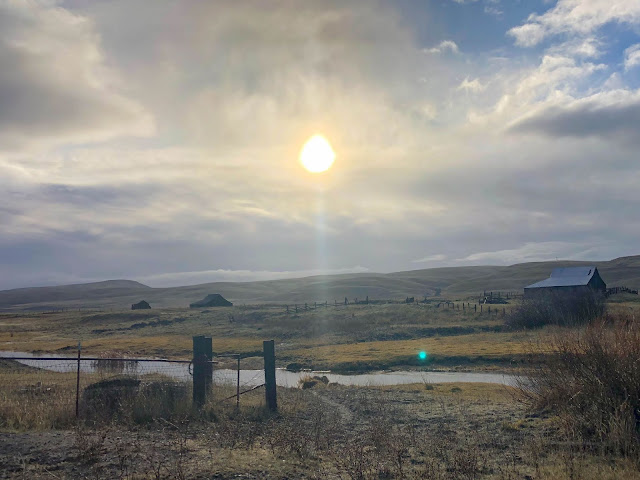 Let's start with the most popular Washington bird recently, the Rustic Bunting at Cape Disappointment State Park.  In the past Rustic Bunting sightings have either been too brief (I was thirty minutes too late at Mount Tabor) or too far (like Neah Bay).   This bird was around for 11 days though and was only two hours and four minutes from home!

Well.  Two hours and four minutes of driving followed by an hour and a half of wandering around a campground.  There were a lot of birds around though so I was easily entertained. 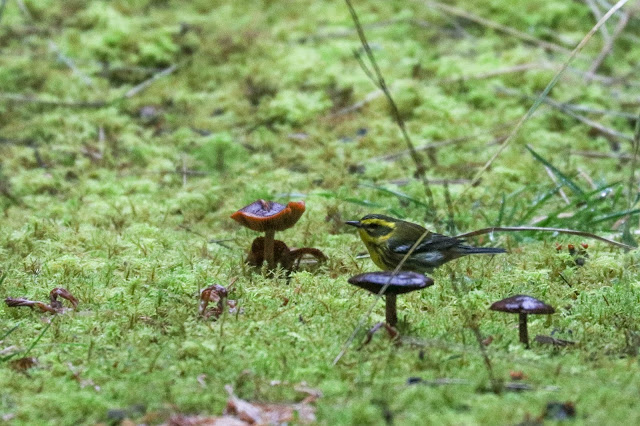 There were mixed flocks all over the place of Townsend's Warblers, Chestnut-backed Chickadees, Red-breasted Nuthatches, Brown Creepers, and Dark-eyed Juncos, all feeding on the ground.  Very distracting. 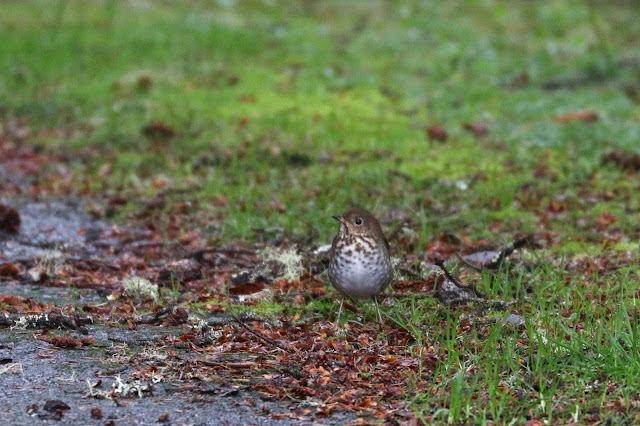 Finally I encountered a bunch of birders pointing their cameras and binoculars at something and indeed, the Rustic Bunting was poking around under a picnic table. 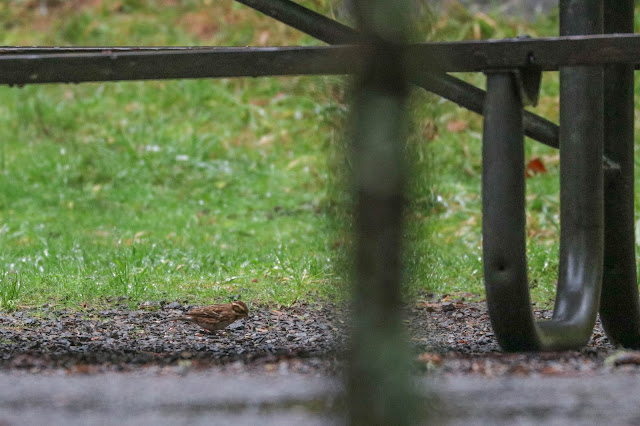 My photos are all terrible from that encounter but that's okay. 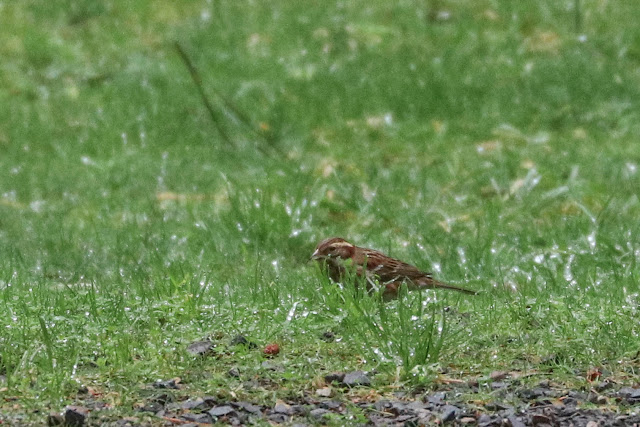 It was a sweet and relatively easy lifer!

Last weekend Jacob and I decided to check out a trail in Klickitat County for a change of scenery.  It was cold but sunny for most of our hike and we saw lots of good birds. 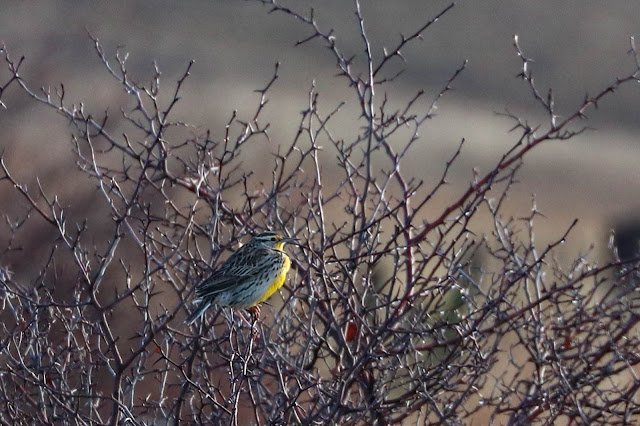 We saw some sparrows up ahead on the trail and I was surprised to find many were American Tree Sparrows! 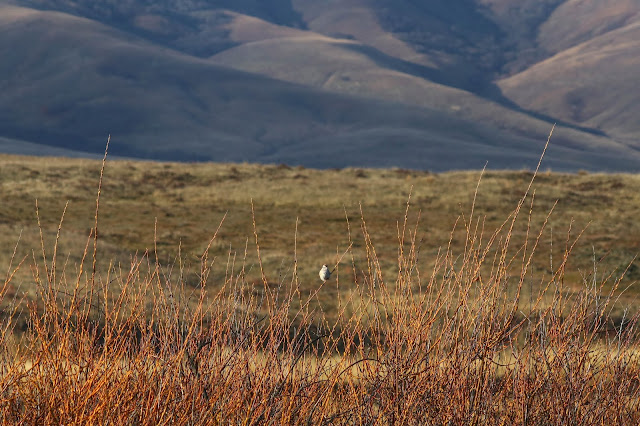 There were at least five but possibly as many as ten. 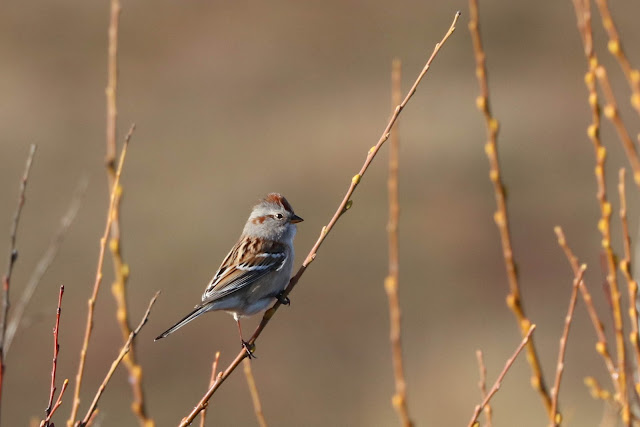 The closest sightings this season had been in Walla Walla and Ellensburg so this flock was pretty far west/south.

There were a couple Great Blue Herons around that would occasionally land on shrubs or barns. 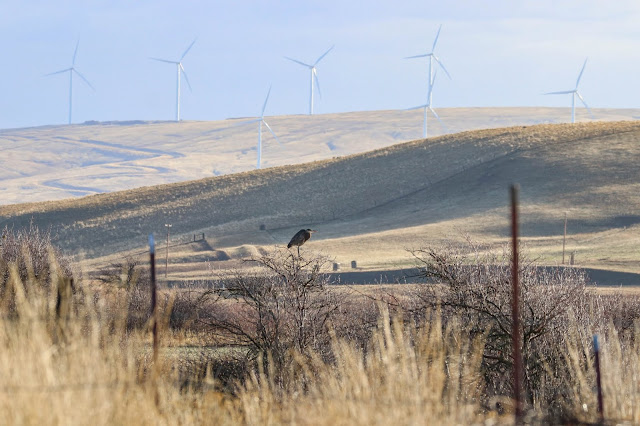 And more birds from the trail: 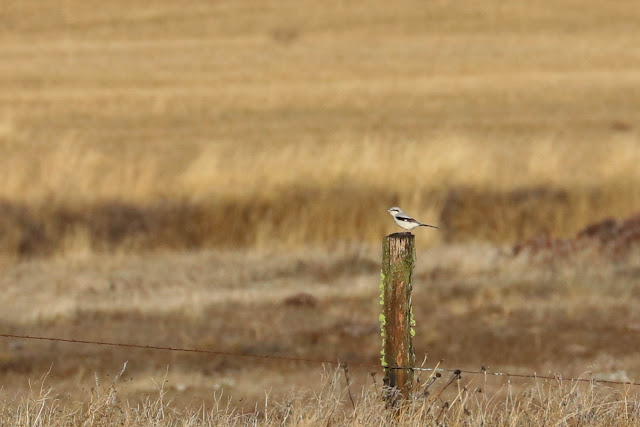 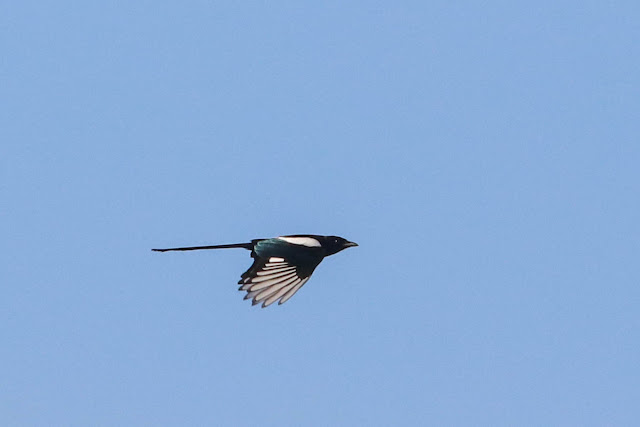 On the walk back we encountered the tree sparrows again and they posed nicely in the sunshine on the barbed wire. 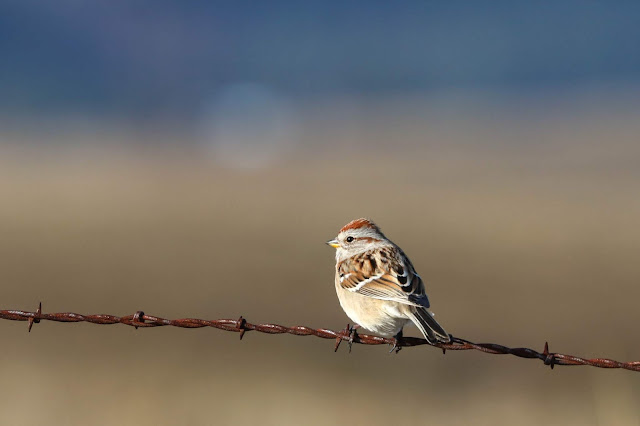 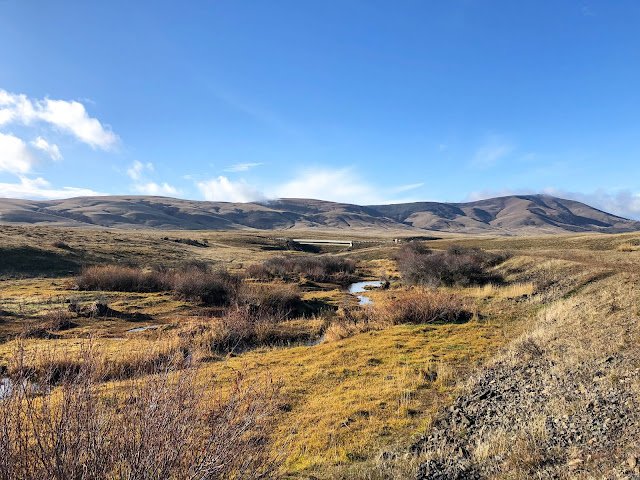 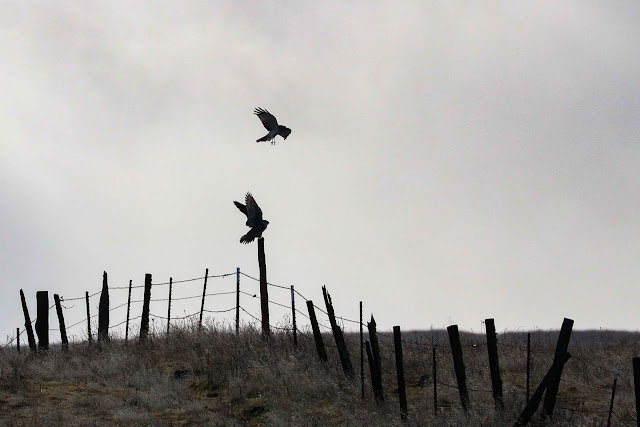 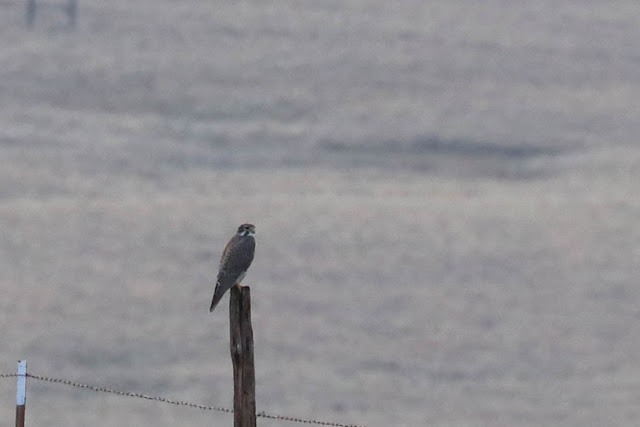 Prairie Falcon after the harrier left

It was a fun little hike in lovely scenery, as is usually the case in Klickitat County. 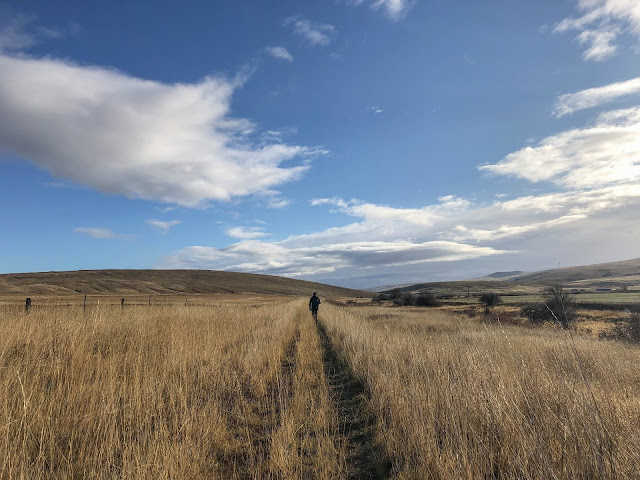 No ticks for once!

Aside from these two day trips my month has been focused on the 5MR challenge of seeing more birds in my 5MR in December than I did in January.  Two weekends ago I did an early morning drive with the dogs around the farm fields in the eastern part of my radius.  I scored hooting Great Horneds and a Barn Owl perched on a post. 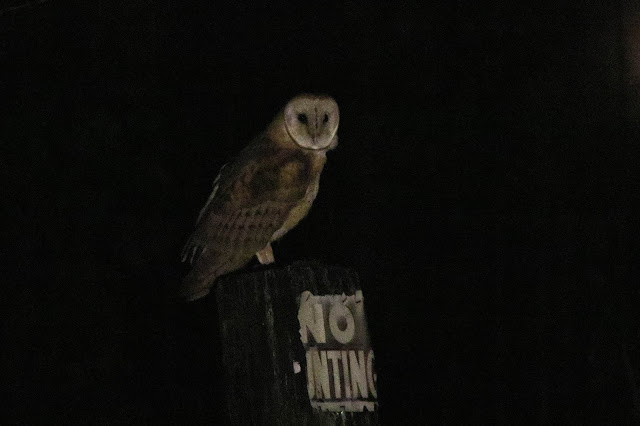 One of the Bed, Bath, and Beyonds in my 5MR has been hosting a decent gull flock this winter and I went over there one morning to look for a couple I needed. 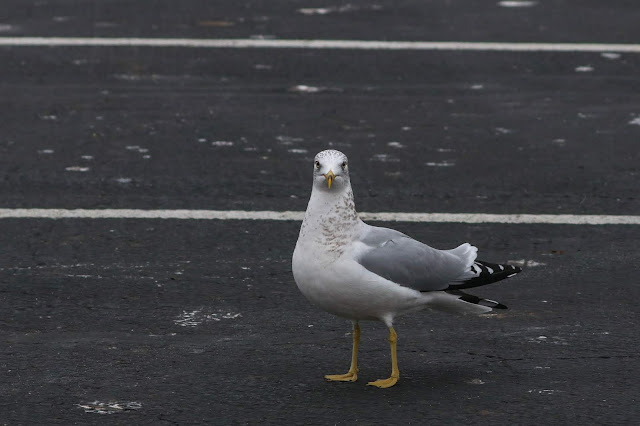 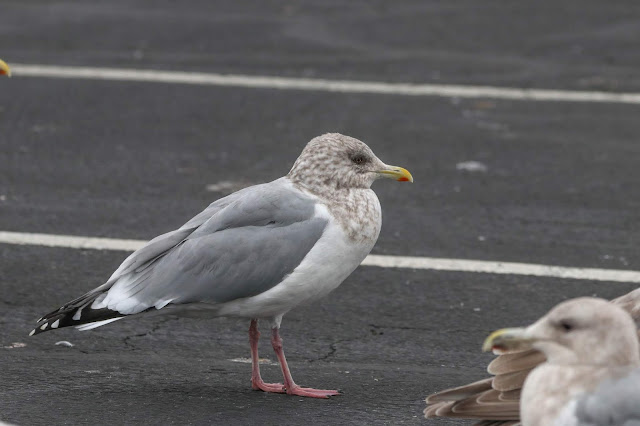 One afternoon I went up to the Burnt Bridge Creek hotspot I used to think was too sketchy to visit.  A few chickadees flew by and one sounded funny.  I raised my binoculars and was shocked to find a Mountain Chickadee! 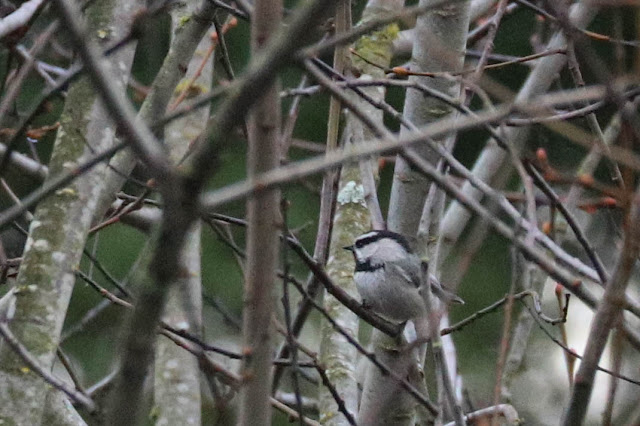 This week I've added eight more species to my month list and I'm now at 87, only two shy of January's 89 species.  A female Cinnamon Teal at my patch was a nice addition. 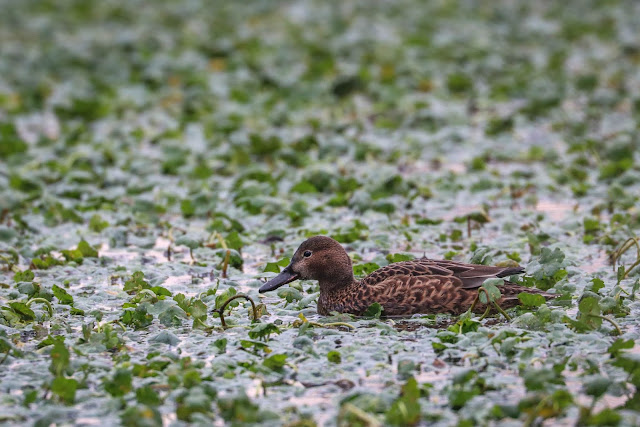 A Brown-headed Cowbird at my Wal-mart patch was another good bird to snag. 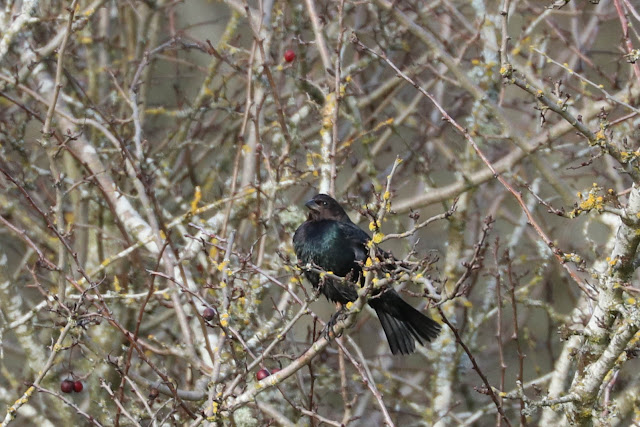 Hopefully I find three more before the month is over!  Good times!!