#Audible Review ~~ We Begin at the End by Chris Whitaker

We Begin at the End 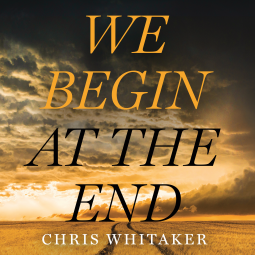 As I mainly read Romance, a good mystery is something that brings me back to my early years of reading. Chris Whitaker may be the best person to bring me back into the mystery world.

This book is hauntingly good. It’s both heartbreaking and uplifting. Duchess Day Radley and her brother Robin have been dealt a horrible hand. A mother who is inattentive and obviously has had a hard life. Duchess’s life, at the age of 13, is a parent to Robin. With her mother not well and her father unknown, this young lady has taken it all on.

They have just one ally – the Chief of Police – Walk. The way in which Mr. Whitaker writes these characters, I fell in love with them, wanted the best for them, and didn’t want to stop listening. And when it did end, I wanted more but the ending was perfect but when you read a great book – you always want more. These characters snuck into my heart and I felt what they were feeling and that is a tribute to the author’s storytelling abilities.

I had the chance to listen to the audible and the narration was good. I would have preferred to have a little more inflection or difference in his voice when other characters were talking because I often found myself unsure of who was talking. The pauses between characters speaking were a little short for my liking- again – not knowing who was talking. But honestly, it didn’t take away from the story.

With We Begin at the End, Chris Whitaker has written an extraordinary novel about people who deserve so much more than life serves them. At times devastating, with flashes of humor and hope throughout, it is ultimately an inspiring tale of how the human spirit prevails and how, in the end, love—in all its different guises—wins. There are two kinds of families: the ones we are born into and the ones we create.

Walk has never left the coastal California town where he grew up. He may have become the chief of police, but he’s still trying to heal the old wound of having given the testimony that sent his best friend, Vincent King, to prison decades before.

Now, thirty years later, Vincent is being released. Duchess is a thirteen-year-old self-proclaimed outlaw. Her mother, Star, grew up with Walk and Vincent. Walk is in overdrive trying to protect them, but Vincent and Star seem bent on sliding deeper into self-destruction. Star always burned bright, but recently that light has dimmed, leaving Duchess to parent not only her mother but her five-year-old brother. At school the other kids make fun of Duchess—her clothes are torn, her hair a mess. But let them throw their sticks, because she’ll throw stones.

Rules are for other people. She’s just trying to survive and keep her family together. A fortysomething-year-old sheriff and a thirteen-year-old girl may not seem to have a lot in common. But they both have come to expect that people will disappoint you, loved ones will leave you, and if you open your heart it will be broken.

So when trouble arrives with Vincent King, Walk and Duchess find they will be unable to do anything but usher it in, arms wide closed.

#Audible Review ~~ We Begin at the End by Chris Whitaker