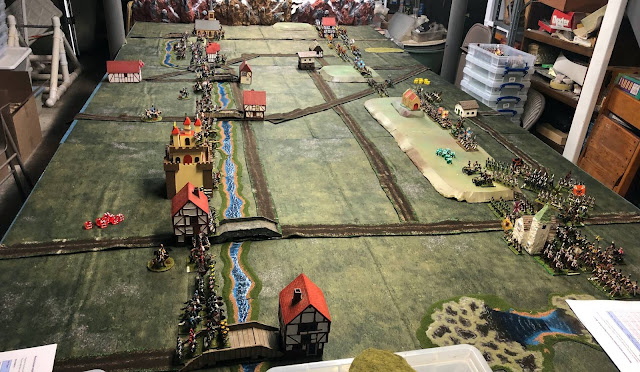 John and I had a chance to play out the first phase of the Battle about 10 days ago. The Russians/Austrians (John) move first, and have launched their attack towards Tellnitz and Sokolnitz. 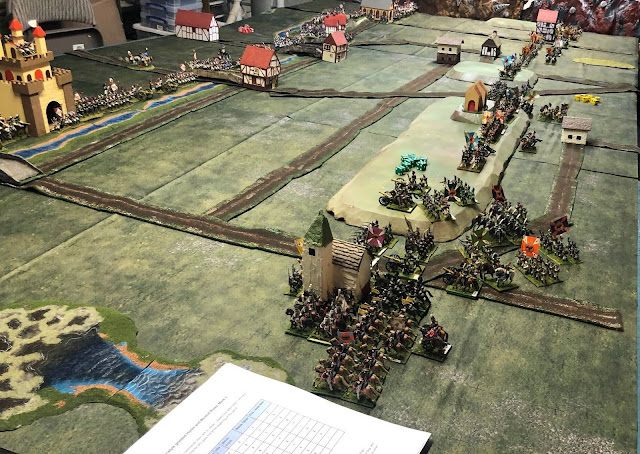 Closer view of the traffic jam; Historically, the situation was even worse! 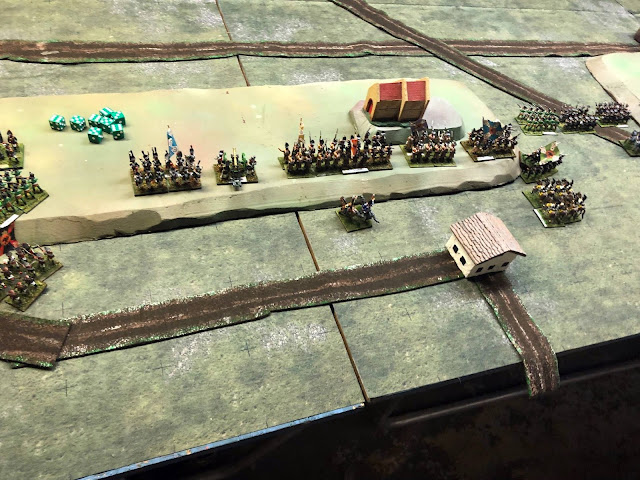 Elsewhere, John contents himself with moving forwards a bit. 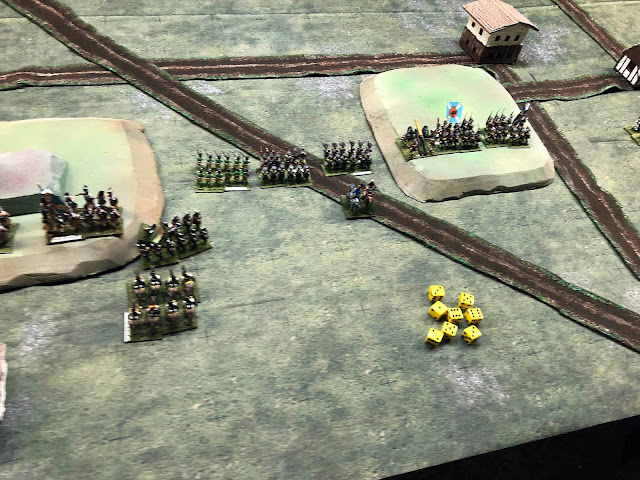 The vicinity of Zurlan Hill. 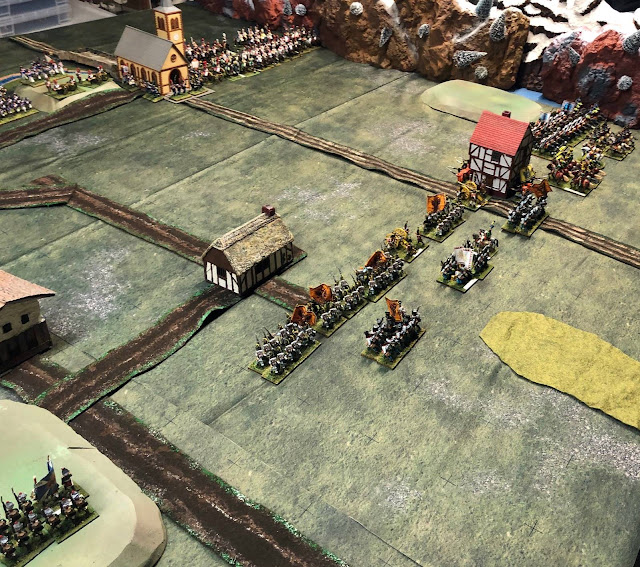 The northern sector; Historically, the Allies in this sector were a mix of Austrians and Russians, but in game terms it seemed best to make these two commands all Austrian, and the other4 s all Russian. 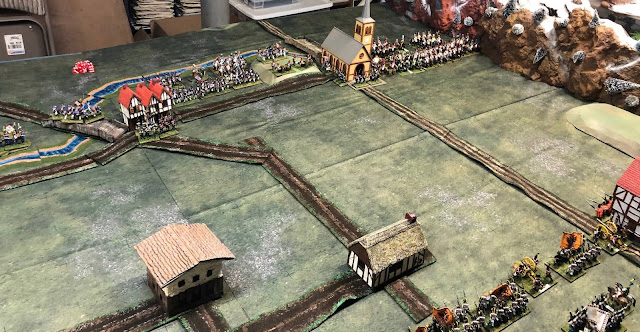 Lannes and Murat command the French opposition in the North.

The French move up to the banks of the Goldbach stream. 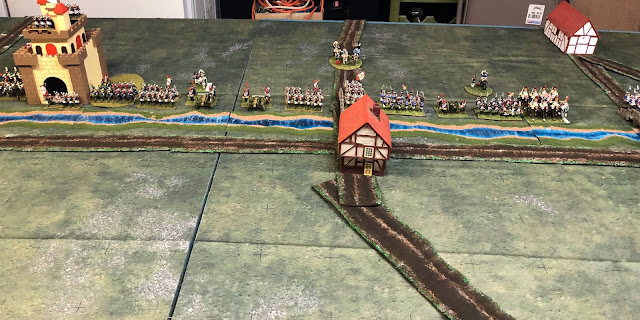 Soult and Bernadotte's troops in the center (each has about 1/3 more in off table reserves, somewhat simulating the literal "fog of war" that covered the lower parts of the battlefield the morning of December 2, 1805. 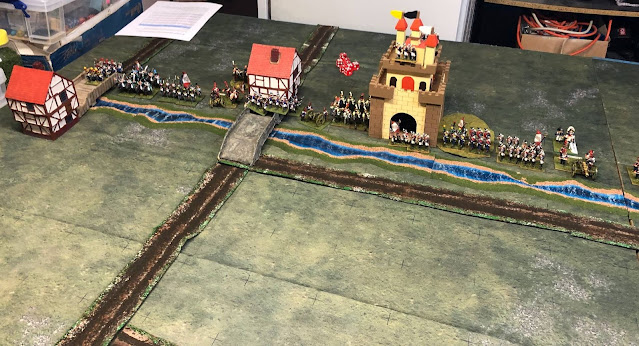 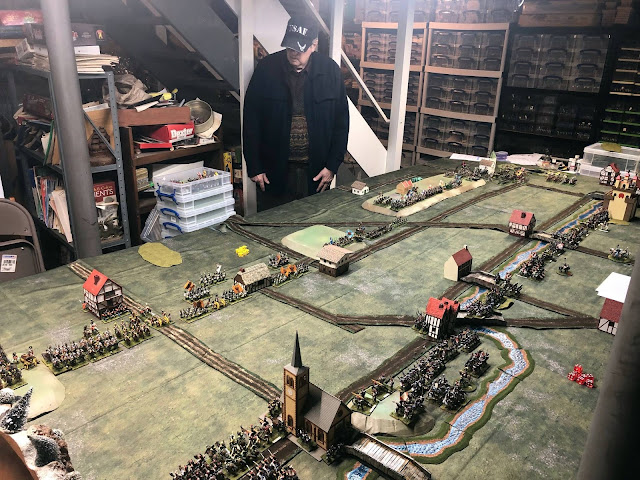 John surveys the table at the end of his second Move. 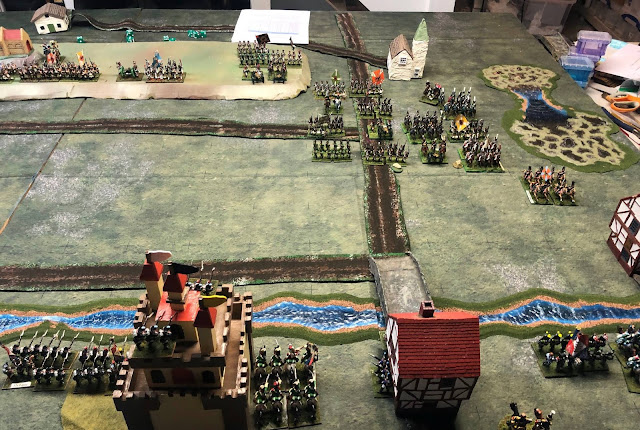 "The Russians are coming!" 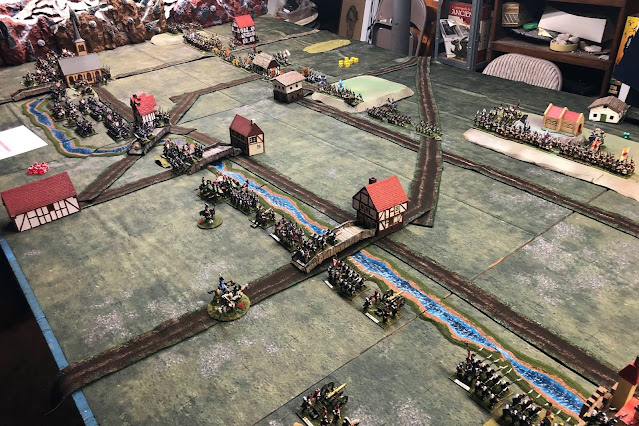 French defensive positions; at this stage combat is limited to long range artillery fire (and rallying).

Note the (mandatory) advance on Tellnitz. 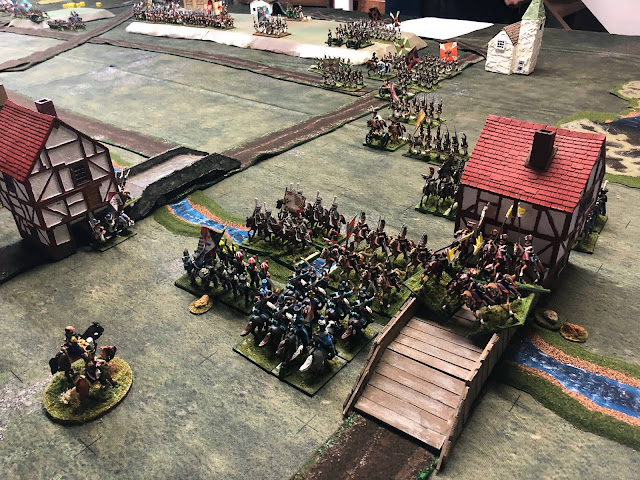 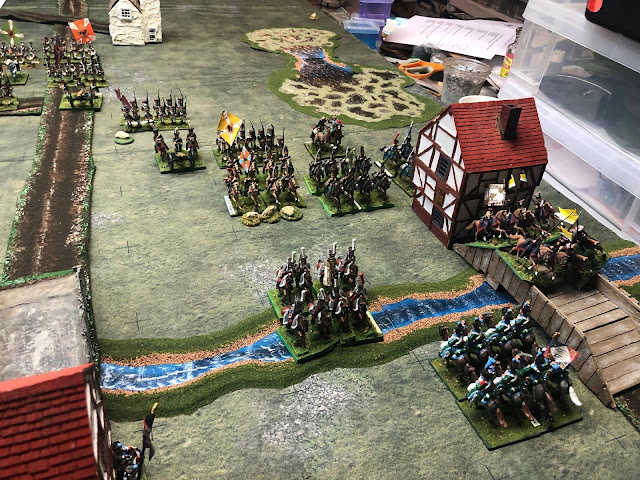 The aftermath of the Russian charge, a mixed bag of results. 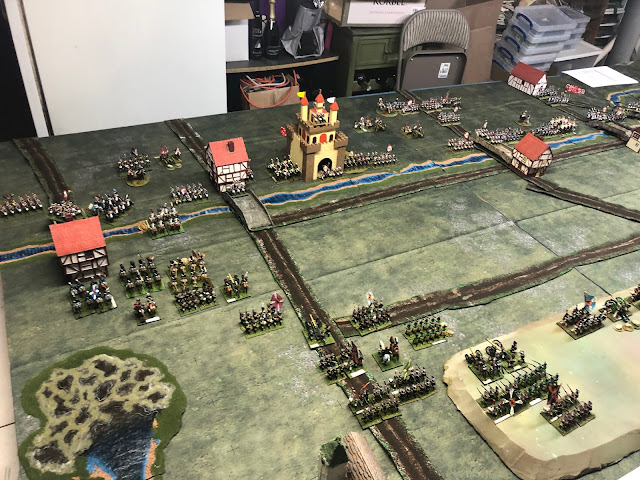 French Reinforcements arrive, first for Davout, and then for Soult and Bernadotte; the Imperial Guard is still in off table reserve. 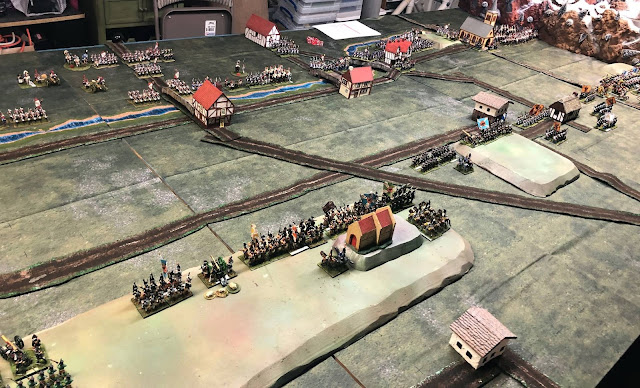 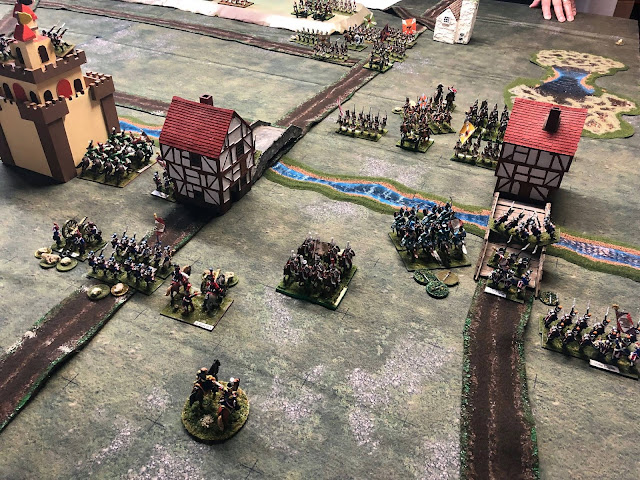 "Hussars in the Backfield!" 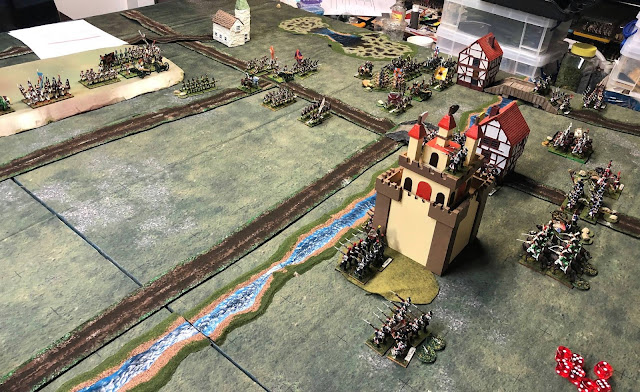 Davout cleans up the Hussars, but his position remains precarious; Soult has to detach a few of his troops to stabilize the situation. 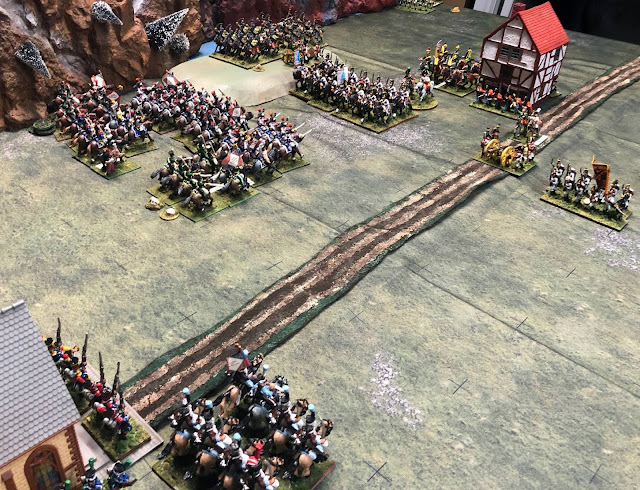 Peter (as Murat) decides it is time to commit the Cavalry Reserve!
If this photo doesn't get the wargaming juices flowing, perhaps you have the wrong hobby? 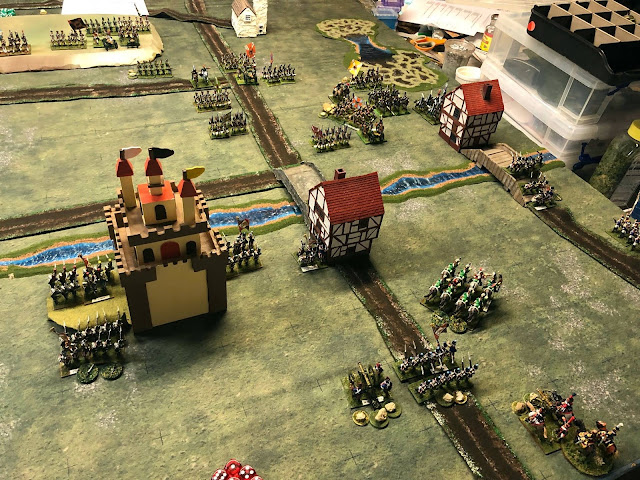 "The thinned blue line" along the Southern reaches of the Goldbach stream. 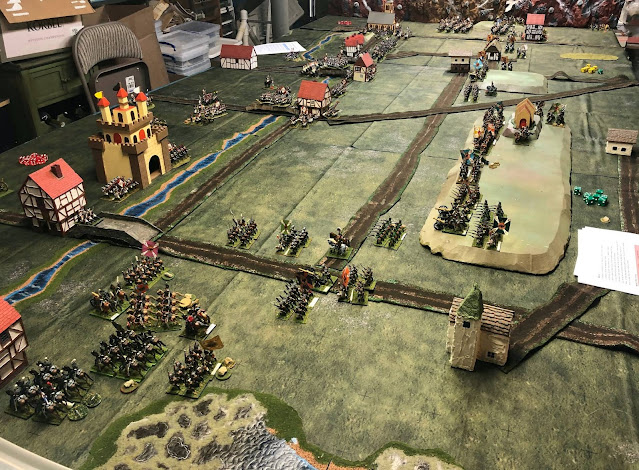 Overview of the battlefield after French Move 4. 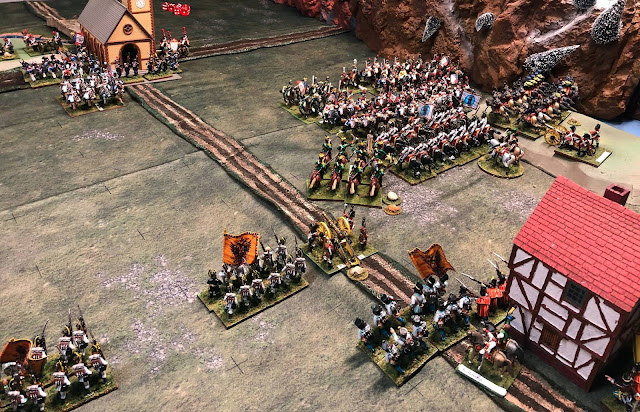 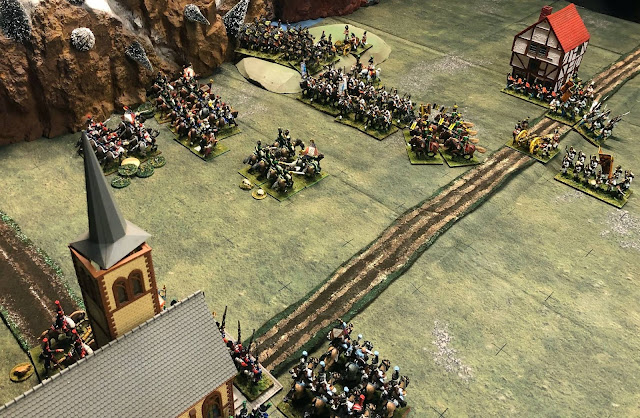 Murat loses every single melee, and is thrown back with heavy losses!
We had to conclude the action at this point, with the French having the next move. I hope to play the rest of the battle out next weekend when I am off for 4 days.