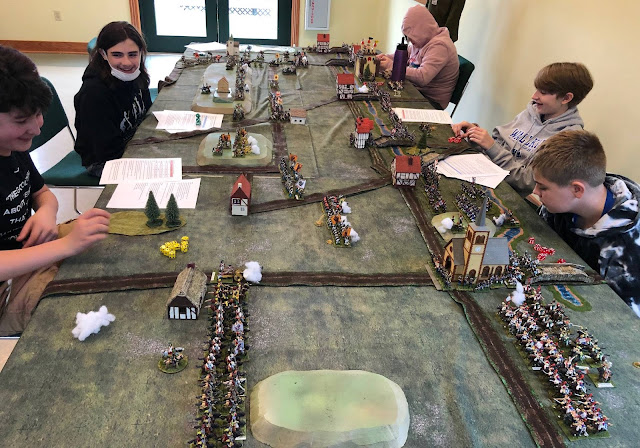 HMGS Next Gen ran a game day at the Gardiner Library in Gardiner, NY, this past Saturday. The venue is lovely, and has a large, very well lit room for events. In addition to my large game there were two more rational sized games run by Jared (Peninsular Napoleonic, I believe), and Greg and Eddie (? North Africa, World War 2?).

View of the table and players from the North early on in the game. Wesley, Thomas, and Levi played the French, while Milo, Ryder, and Ben played the Allies. 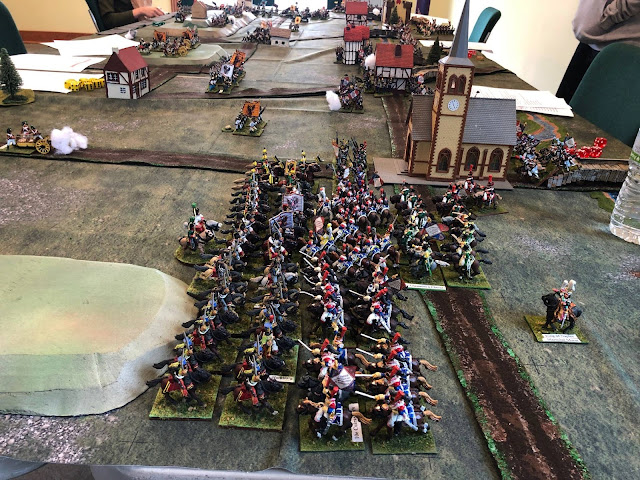 The French Cavalry Reserve under Murat is charged by their Austrian ciounterpart under Liechtenstein. 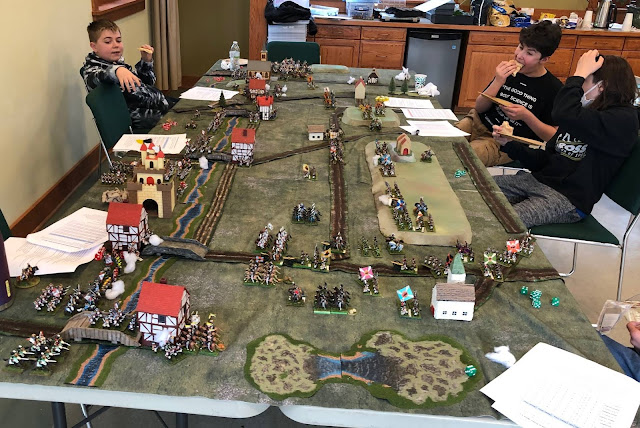 Lunch break; the Library provided doughnuts, coffee, Pizza, water, soda, fruit juice, and even Oreos. Carolyn commented that this was the only group where there's NEVER anything left over! 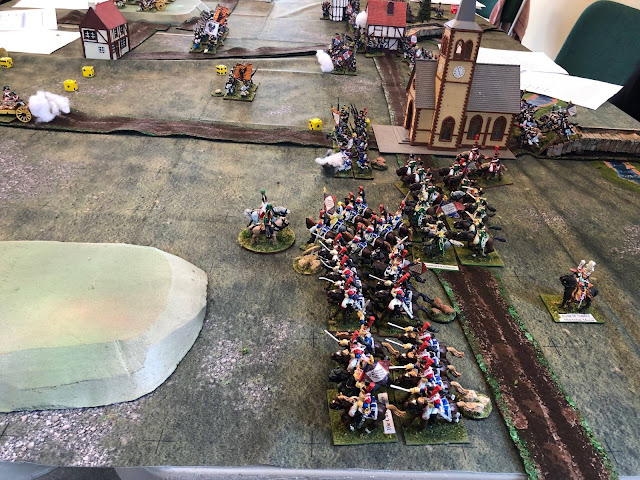 The afatermath of the great cavalry charge; the French had hot dice and won every melee decisively, all but eliminating the opposing command. this p[ut all of the Allied forces in the North in grave danger! 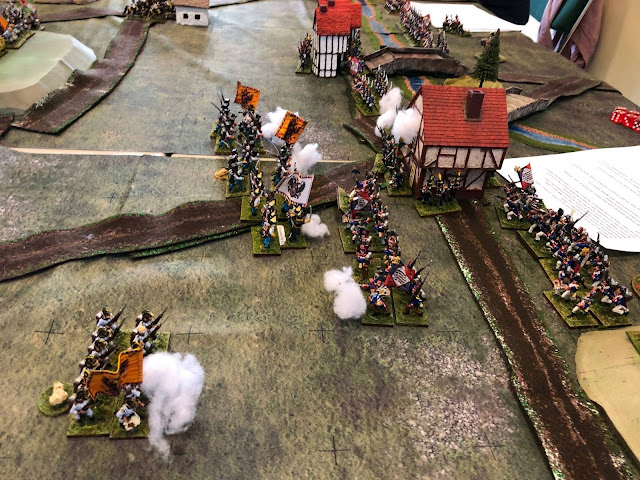 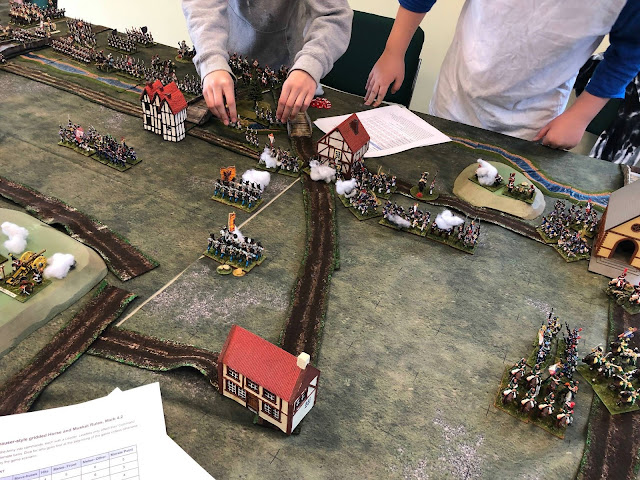 The Austrians come out the worst for it once again! 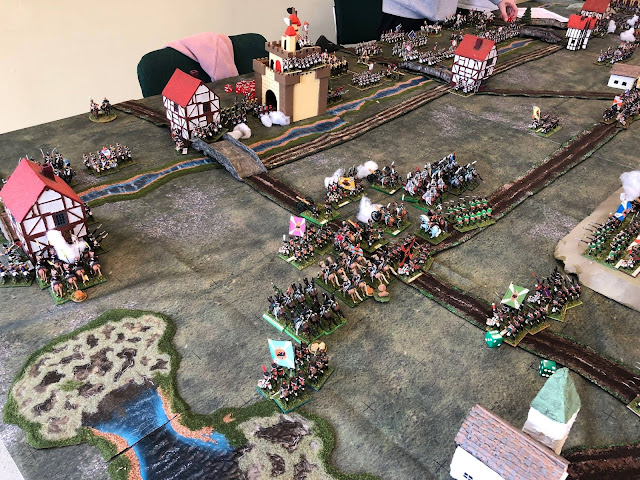 As happened in the actual battle, the Russians in the South had difficulty maneuvering and bringing their big advantage in numbers to bear on Davout's command holding Tellnitz and Sokolnitz, despite both of Davout's Artillery units being eliminated on the very first move - incredible shooting by the Russians! 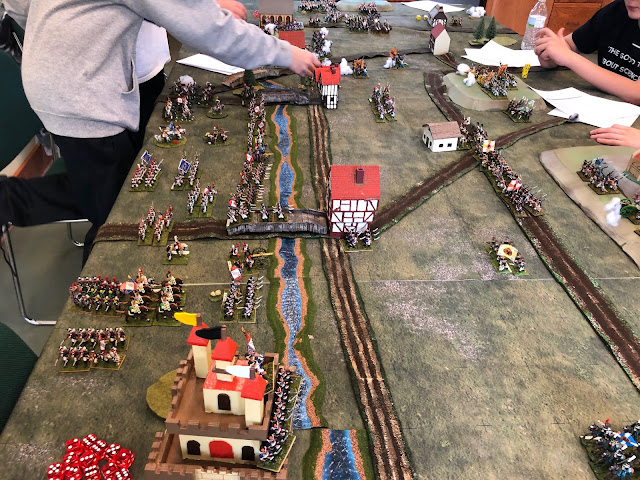 Over view of the center in mid game; the Russians have descended the Pratzen heights in an attempt to take some of the pressure of of their Right; however, the French Imperial Guard has entered the table to add punch to Soult's attack, which will start soon after.

We played quite a few turns and ended as the Russian Imperial Guard reserves were arriving to bolster the Allied Right. Most of the guys would happily have continued playing. Overall, I'd give the French the edge in the battle, although they were unlikely to achieve the decisive victory that Napoleon did in the actual battle! 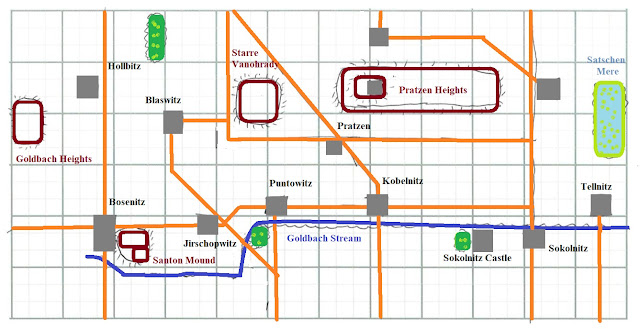 The available tables allowed for a 5 x 12 foot area, which actually worked better; I chopped 4" off the top edge and 8" off the bottom edge of the map above, which worked fine. 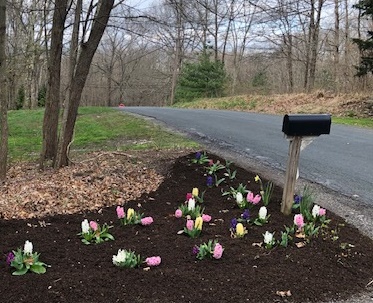 Gratuitous shot of s mass of Hyacinths by our mailbox this week.

Orders of Battle are based upon the following ratio

*Special - Any French Infantry whose Corps commander is within 6 boxes of Napoleon, and are within command radius of their own Commander,  may add 1 box to its move. If Napoleon is lost, the French lose.

Organize the Army into commands, each with a Leader. Leaders only affect their Command.

Players alternate turns. Dice for who goes first at the beginning of the game unless otherwise specified by the game scenario. All movement and shooting is +/- 45 degrees from unit’s front.

Counts as 1.5 boxes to move, or measure range, on the diagonal

Increase Move by 50% if the entire move is along a road.

Units may move directly to their rear or flank  at half speed, maintaining facing.

Only Light Infantry may enter woods. Cavalry and Artillery may not enter buildings.

If entering an enemy zone of control [ZOC] (within the 3 boxes to the front) must stop, and

melee will result. Must face into the box of at least one enemy unit whose ZOC you enter.

Infantry Units in Square formation have no flanks or rear, but may not move..

Units may Fire at the beginning or end of their move, but not in between; EXCEPTION - Foot Artillery may not fire at all if it moves, other than to change facing.  Field of fire is +/- 45 degrees.

Roll as many D6 as there are hits remaining to the unit. Exception: Squares may fire no more than 1 D6 from any face.

Mark each unit that shoots with a “smoke” marker; remove the smoke as the first action of each player’s turn.

Units that do not have smoke markers on them may shoot back if shot at or at any enemy units that enter their ZOC; they are then marked with smoke as well.

Units in a stream or ford may not shoot. Units on hills may shoot over friends if the distance from the shooter to the friendly unit(s) is less than thet from the friends to the target.

Minus 1 to die roll if shooting into woods, at targets behind walls, or in buildings.

Minus 1 to die roll if  their Command is Shaken.

Units suffering 2 or more hits due to fire in a single turn roll a D6 for every 2 hits; if the roll is less than their Morale Point, they must Fall Back 2 boxes, facing the enemy. Shaken units subtract 1.

Command MoraleWhen ½ of the units in a Command have been removed it becomes Shaken and must immediately retreat 4 boxes. Units which are part of a Shaken Command move at half

speed, except to the rear (retreating), and suffer an additional minus 1 penalty to shooting, morale rolls, and melee.

Army Morale When HALF of the Commands in an army are Shaken the General must concede.

All attacking units facing into a box containing an enemy unit fight in melee.

All defending units who are attacked fight in Melee

All defending units which have an enemy in their ZOC may fight in melee.

Resolve multiple unit melees so as to involve the fewest possible units in each.

All units in Melee roll as many dice as they have hits remaining.

Each die that has a score greater than or equal to the Melee rating of that unit is a hit!

Use the “Other” rating for units attacked in  the flank or rear, or if Cavalry attacking Infantry in Square.

Minus 1 to die roll when attacking uphill, from stream, into woods, or units in buildings.

Minus 1 to die roll if their Command is Shaken.

Plus 1 to die roll for Lance armed cavalry when fighting infantry only.

Units losing a melee (causing fewer hits than the enemy) Fall Back 2 boxes, facing the enemy.

If both units score the same number of hits, and neither is eliminated, check morale as per fire for every 2 hits suffered

Victorious units MAY move into the box vacated by the enemy.

Must stay w/in 6 boxes of his command; units farther away move ½ speed (round up)

Leaders can’t shoot, but do participate in melees.

the leader takes a hit. 2 hits eliminates a Leader, all his units then move half speed (round up)

May Rally 1 unit within 6 boxes at the start of their Move:

Subtract 1 for units belonging to a Shaken command

Assigned Historically, or  Roll a D6 for each Leader at the start of the game: