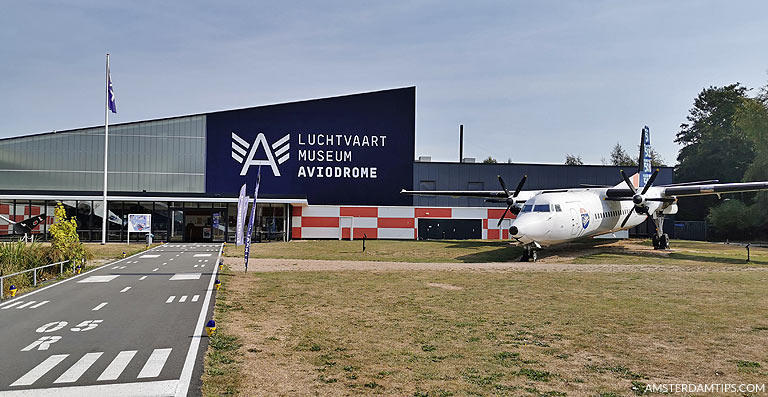 Aviodrome is an aviation-themed museum located next to Lelystad Airport, about 40km east of Amsterdam. With a collection of over 100 aircraft and a raft of activities, it is a fun day out for all the family.

Aviodrome opened its doors in 2003 for a growing aviation collection which had originally been kept in a museum at Schiphol Airport.

The Aviodrome complex has 3 buildings with large outdoor areas between them. The main building includes the entrance/foyer and its exhibition area houses the principal collection of planes. There is also a cinema/theatre for film shows.

The exhibition is themed as ‘100 years of aviation history‘. It starts from the very earliest days of air travel and aviation pioneers, continues with how KLM was started in 1919 and follows the rise of commercial aviation in general. There are features about aviation during World War 2 and the development of Amsterdam Schiphol airport.

There is also a separate exhibition about space exploration. All the exhibits are very well presented and have English translations.

Aviodrome’s outside area has various playgrounds for children, a flight simulator ride, parked aircraft and an outlook viewpoint over Lelystad airport runway.

Perhaps the highlight of the entire collection is the parked KLM Boeing 747-200 (PH-BUK – named Louis Blériot – which operated from 1978 to 2003). You can get on board and explore the aircraft including the back cargo section and the elevated top deck with its business class seats and cockpit.

There are photos which show how the plane was transported by barge from Amsterdam – as Lelystad airport could not handle that size of aircraft.

The museum has an authentic replica of the Schiphol airport terminal building from 1928 which is decorated in the style of the period. You can try to learn Morse code in the radio room and climb up the tower for a sweeping panorama of the museum and airport.

The final building is the T2 Hangar which has various aircraft and mechanical parts on display.

On our visits to the museum we have found the staff to be friendly and volunteers are sometimes on hand to offer explanations at some of the exhibits. There is a reasonably-priced cafe in the main building with indoor/outdoor seating available.

Overall, Aviodrome is well worth a visit, especially for families with children and aviation enthusiasts.