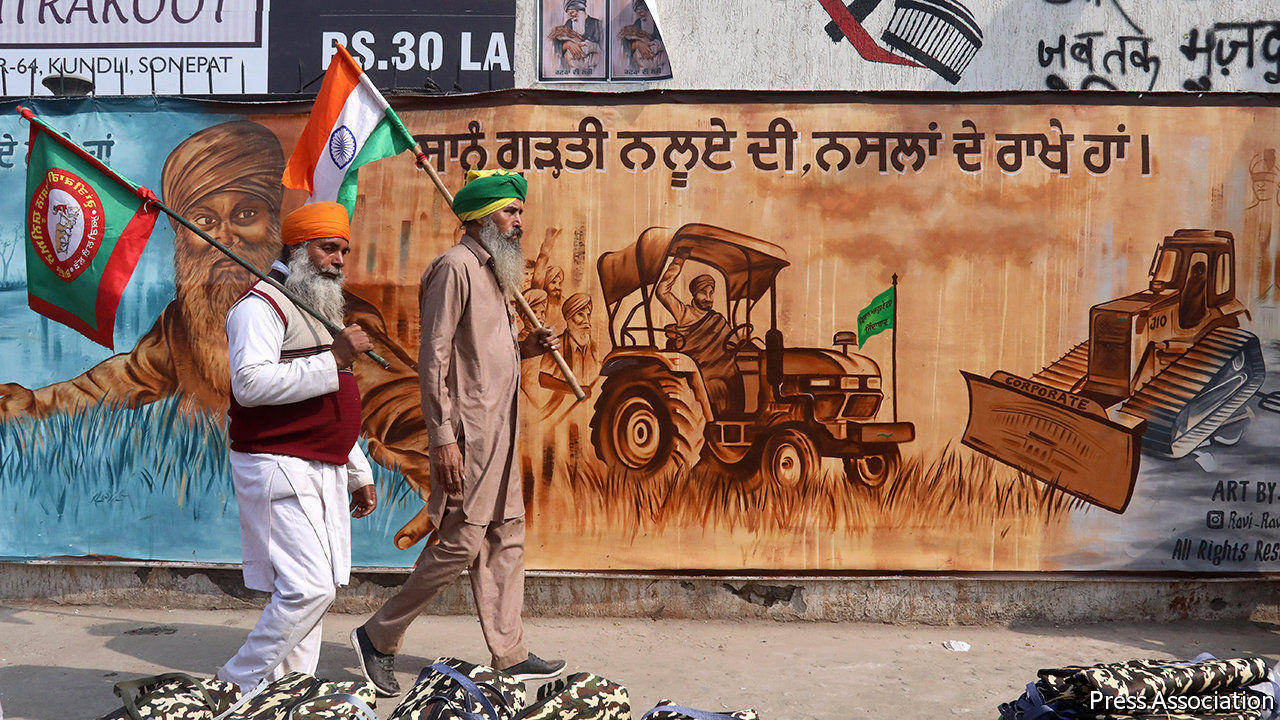 Why are Indian farmers protesting?

The Economist explains
Why are Indian farmers protesting?

HUNDREDS OF THOUSANDS of furious farmers are crowded in a rough ring around Delhi, India’s capital. Many came in November from the nearby states of Punjab and Haryana, riding tractors and lorries provisioned for a long protest. On Republic Day, January 26th, thousands demonstrated against the national government with a series of orderly tractor-parades, while a smaller contingent broke away and scuffled with police around the Red Fort, a 17th-century monument long associated with India’s ruling powers. The police fortified barriers around the protesters’ camps, cutting off water, electricity and the internet. And then Rihanna got involved. On February 2nd the Barbadian singer alerted her 101m followers on Twitter on February 2nd to a news article about the conflict between police and protesters: “why aren’t we talking about this?!” A few other international celebrities followed suit, prompting India’s foreign ministry to tweet in rebuke, instructing them to resist the “temptation of sensationalist social media” and undertake a “proper understanding of the issues at hand”. What, then, are the issues that provoked the farmers in the first place?

Their foremost complaint has been plain since September 2020, when the prime minister, Narendra Modi, rushed through parliament three bills to reform Indian agriculture. The new laws were supposed to empower farmers by giving them a greater say in the sale of their produce. For over five decades, they have been selling only in designated wholesale markets controlled by state governments, never directly to buyers. The markets, or mandis, are supposed to protect farmers from bigger players by interposing a layer of carefully monitored middlemen. The basic idea, according to Mekhala Krishnamurthy of Ashoka University, is that “wherever you find a very large number of small sellers, they are vulnerable to monopsonies.” But over time the mandis and associated laws have proved disappointing to all parties. Lack of transparency, collusion among traders and price-fixing agreements have reduced farmers’ earnings. Delayed payments push them to borrow heavily from moneylenders. Shocking numbers are driven to suicide. With nearly 60% of all Indians depending primarily on agriculture for their income, any hindrance to the sector has a colossal impact on the whole country.

The new laws would deregulate the market in several ways. First, they allow farmers to sell their produce outside mandis and directly to buyers. This ought to be beneficial, giving farmers more choice and making them less dependent on the middlemen. But the laws are thin on detail, and farmers fear they could be manipulated. The protesters point fingers at a pair of multinational firms close to Mr Modi, anticipating that they would become the greatest beneficiaries of the reforms. The farmers also reason that new buyers, big or small, will obviate the mandis, wiping out even the most basic protections—like keeping fraudsters off the buying lot. “When markets are imperfect,” Ms Krishnamurthy observes, “deregulation tends to exacerbate inequalities.” The new rules sidestep important questions about the future of the mandis. Likewise they say nothing about minimum-support prices, which have enriched many farmers in Punjab and Haryana. Price floors are supposed to defend farmers against fluctuations owing to, for example, blights and monsoons. In the aggregate, however, they have done more harm than good, fouling up incentives in the most productive states and distorting rice and wheat markets everywhere. Arguably Punjabis and Haryanvis have gained the most under the current system; undoubtedly they stand to lose the most under a reorganisation.

Even the most obvious improvement promised by the reforms has made farmers leery. To modernise Indian agriculture, one of the new laws allows for large-scale cold storage. But that means removing limits on stockpiling commodities for future sale. And whereas agribusinesses have the capacity to hoard large quantities of produce, farmers usually have to sell theirs within a few days of harvest. Fearing they will be taken advantage of, farmers have ditched their ploughs and driven their tractors to Delhi’s gates. In January the government offered to suspend the laws’ implementation for 18 months, but the farmers refused, demanding revocation, nothing less.

The government’s biggest obstacle, more than any particular point of contention over policy, is a trust deficit. Agronomists and economists are in nearly uniform agreement with the thrust of the new laws. But Mr Modi’s government has made a habit of bypassing oversight to force through bold changes, and it has been noticed that some of these reforms backfire. Its experiment with “demonetisation” in 2016 and its draconian approach to covid-19 lockdowns in March 2020 created painful memories. The details matter too, and in matters of agriculture these vary drastically from state to state. In some states mandis are cherished, in others virtually ignored. Bihar, 900km east of Delhi, scrapped its mandi system in 2006, yet continues to be one of the poorest states in the country, now with less regulation. Farmers there were told that private investment would grow and traders would buy produce at higher prices, but that did not happen. Elsewhere in north India, farmers were watching. Even the best-laid plans for reform can be thwarted by fear, in a sector where workers already struggle to reap what they sow.

Why are Indian farmers protesting?