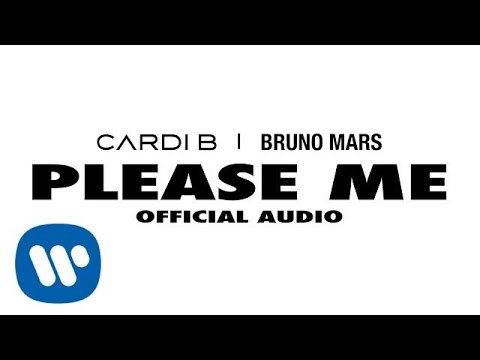 Back at number 1 for a fourth week after being interrupted last week by, um, the other Ariana Grade single, “Break Up With Your Girlfriend I’m Bored” – though it’s close to a tie between the two tracks.  Technically that makes Ariana Grande the first artist ever to replace themselves at number one twice in a row, but it’s the streaming era and this sort of thing is a lot easier than it ever was in the past.

“Break Up” is at number 2, and “Needy” drops to number 11; regular readers will be well aware that the chart rules only allow three tracks from the album to chart.  The album itself gets a second week at number one.  I don’t think any of these tracks are especially good material, but there’s no denying her A-list status.

This is the second time that Cardi B and Bruno Mars have collaborated on a single, after “Finesse” reached number 5 last year.  I don’t generally like Bruno Mars records – he’s a bit too obvious in re-enacting his influences – but Cardi B seems to help take the edge off that, so she’s a good fit for him.  This isn’t bad.

“Advice” by Cadet & Deno Driz climbs 36-14, easily beating its previous peak of 27 from a month ago.  This re-entered the top 40 last week following Cadet’s death in a car crash; the reason we’re getting a bigger climb now is to do with a quirk of the chart rules.  The record has been out since October, so the rule that downgrades the streams for older singles had kicked in.  For records that are still relatively new, this can be cancelled out if the track starts gaining sales again (something which was mainly intended to cover album tracks later being promoted to singles).  But for some reason the cancellation only takes effect in the following week – hence the big climb here.

This is D-Block Europe’s second appearance on the singles chart after “Nassty” reached number 35 last year.  They’re not an act so much as a collective; the actual members on this track are Young Adz and Dirtbike LB, who were also on the previous single.  The track is from their album – sorry, mixtape – “Home Alone”, which enters on the album chart at number 6.  Their previous album “Any Minute Now” reached number 14 last year, but that was a collaboration with Yxng Bane, who’s a bigger name, so it didn’t necessarily imply that their own album would do better.

“Kitchen Kings” is… a record?  It leaves me kind of cold, but let’s not pretend I’m the target demographic for this.  I’m going to hazard a guess that their interest in kitchen equipment may not be entirely gastronomical.

Climbing from 40 last week, which might not be entirely unconnected with the release of the mix above which has as much of Cardi B than it does of Blueface.  But officially it’s not the lead version, so the chart credit still goes solely to him.

This had a week at number 34 at the start of the month, but it re-enters now that the single version is available.  It’s growing on me – the opening is an awkward mix of bombastic and Latin, but it picks up in the second half.

Finally for this week… well, not a bad video there, though the product placement is absurdly blatant.  Are Absolut meant to be sponsoring this experiment?  Katy Perry has now had top 40 hits in ten different calendar years.  She actually had her first hit in 2008, but she didn’t release anything in 2015, so… ten different years.

Over on the album chart, Ariana Grande’s “Thank U Next” is still number 1, and we’ve also mentioned D-Block Europe’s “Home Alone” entering at 6.

Avril Lavigne’s first album was back in 2002, and the last was in 2013.  The long gap is mainly due to Lyme’s disease, and she duly returns with an album about triumphing over the odds – in America, the single above was promoted not just to mainstream adult contemporary stations, but also to Christian radio.  It’s going big and it carries it off.

And you thought it was a long time between Avril Lavigne albums.  Chaka Khan’s last studio album was released in 2007 – not that she’s previously had much impact on the album chart.  Her only previous top 40 albums in the UK were “I Feel For You” in 1984, and a remix album in 1989.  Looks to be another example of a veteran act holding up against the general decline of the album market.

This is a Drake mixtape from 2009, before he was having hits in this country.  It’s finally been released to streaming services f0r its tenth anniversary.

Making its first appearance in the album top 40, Avantasia is an operatic metal side project of Tobias Sammet, the singer from German metal band Edguy.  The name is a combination of “Avalon” and “Fantasia”.  They’ve been around on and off since 1999, and they’re every bit as subtle as you might expect.