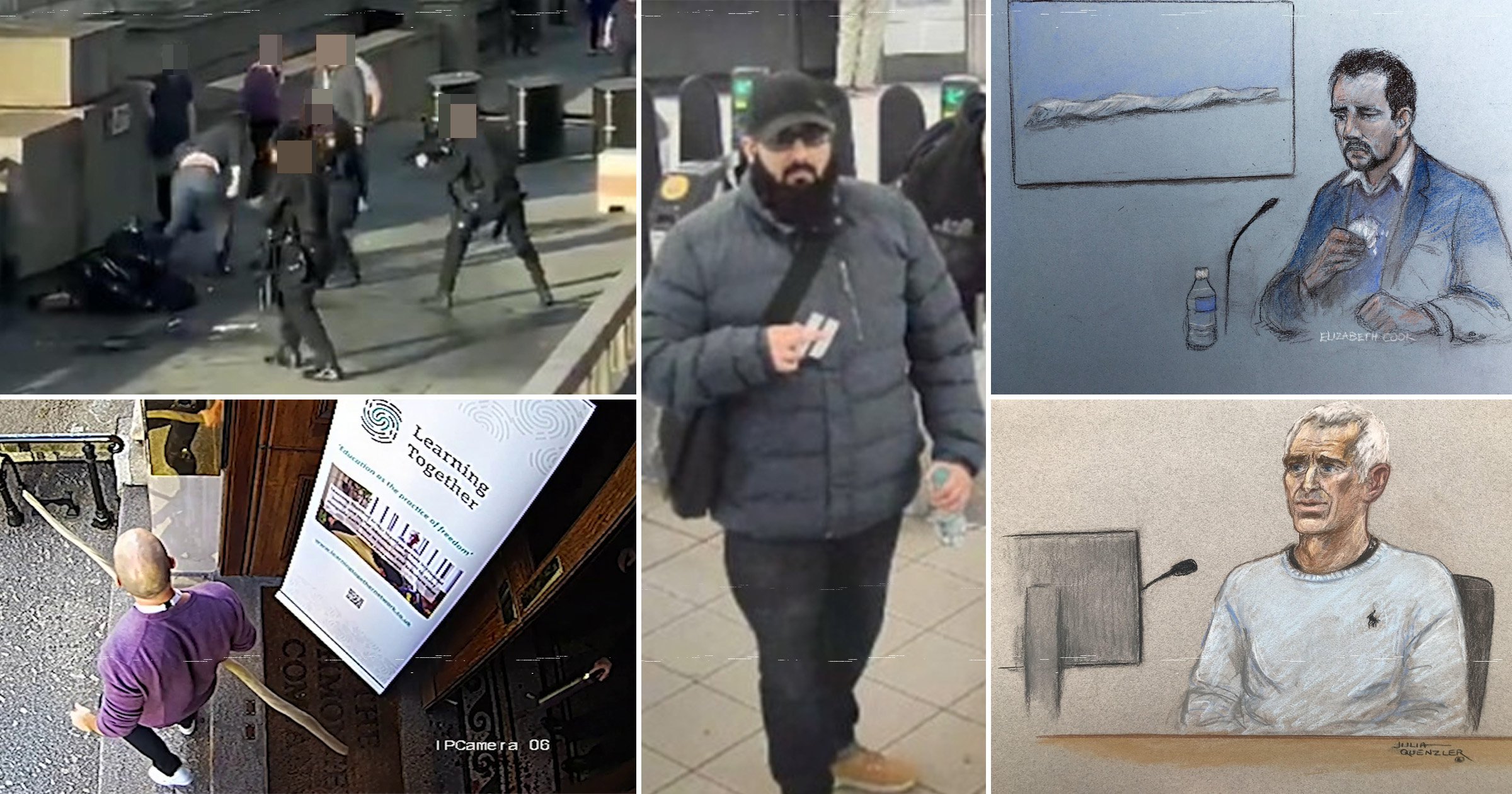 Fishmongers’ Hall heroes break down recounting how they fought off terrorist

Three men emotionally told of how they bravely fought off the Fishmongers’ Hall terrorist by tackling him with a narwhal tusk and fire extinguisher.

John Crilly, Darryn Frost and Steven Gallant dramatically recounted how they pinned down knifeman Usman Khan, 28, on London Bridge helping bring his knife rampage to an end on November 29, 2019.

Moments before, the convicted terrorist had fatally stabbed Cambridge graduates Jack Merritt, 25, and Saskia Jones, 23, and injured three other people at Fishmongers’ Hall.

Ex-prisoner Mr Crilly hosed the attacker with a fire extinguisher and prisons communications manager Mr Frost jabbed at him with a narwhal tusk, before unarmed inmate Mr Gallant tackled Khan to the ground.

The three men managed to detain Khan, who had two large knives and wore a fake suicide belt, long enough until police arrived and shot him dead.

The men, along with Khan, had been attending the Learning Together offender educational conference when the terrorist launched his knife attack inside the hall before making his way onto London Bridge.

Giving evidence at the inquest into the victims’ deaths, Mr Frost told jurors how he grabbed a narwhal tusk from a wall inside the hall and ‘ran at full sprint towards’ the attacker.

Mr Frost told the court: ‘The first thing I saw were the two shining blades… the blades were above his ear level because he was holding them up and bashing them at the door.

‘I didn’t attack, I just put the tip of the narwhal tusk about an inch or two from his midriff. He turned and faced me square on.

‘He still held the knives above him but he glanced down at the narwhal tusk and glanced back up at me and paused and looked at me for a while.

‘That’s when I took everything in that I saw. The light was shining behind him and there was a lady curled up in the foetal position. She was curled up in a pool of her own blood.’

Mr Frost told how he stalled the knifeman while people rushed to attend to Ms Jones, before someone shouted that Khan had a bomb.

‘[Khan] motioned down with his head… and he said: “And I’ve got a bomb”,’ Mr Frost continued.

Mr Frost said Mr Gallant then appeared at the door and threw a chair at Khan, who charged towards his new target.

He handed then-stranger Mr Gallant the narwhal tusk who ‘whacked’ Khan before dashing off to grab another from upstairs.

Khan staggered outside and onto London Bridge, pursued by Mr Gallant, Mr Frost and Mr Crilly, who said he screamed at people outside: ‘He’s got a bomb, get back.’

The trio worked together to disable the killer with Mr Frost piercing his torso with the weapon as he tried to attack, followed by Mr Crilly spraying the foam which allowed Mr Gallant to corner him.

Mr Gallant said: ‘He [Khan] stopped and turned around, possibly frustrated by our perseverance.

‘I remember my hands going towards him. I grabbed his jacket, two hands.

‘I grabbed him, tried to swing him round. He was very quick, a lot of movement going on, somehow I managed to grab him to the floor.’

Mr Gallant said Khan managed to get up, so he gave the suspect ‘a couple of uppercuts to the face’, which he said helped to ‘stun him a little bit’.

When police arrived at the scene and ordered everyone to get back, Mr Crilly told jurors he ‘got off quick’ and yelled at police to ‘just shoot the bastard’.

‘I was telling them “he’s just killed people, he’s got a bomb just shoot him”.’

Mr Frost feared Khan might set off the bomb once police arrived, as he had threatened to do.

‘I didn’t want him to be shot. His statement that he was waiting for the police meant he wanted to die,’ he said.

Mr Frost, his voice trembling with emotion, said: ‘I saw the chaos he had caused in the hall – I didn’t want him to have the satisfaction of his choice when he had taken that away from others.’

The prison and probation service communications manager continued to hold Khan, despite police telling him to let go.

He said: ‘There was a struggle for a while and when Khan saw I wasn’t releasing him he seemed to relax a little.

‘The police shouted: “He’s got a bomb”. He seemed so distressed, his voice broke.’

After he moved back, Mr Frost said he heard ‘three cracks and an echo’.

Believing the bomb had been detonated, he said: ‘I thought then that everyone was dead in the near vicinity, including the police I was trying to protect.’

But when he looked at Khan he realised that he had been shot, he said.

Lawyers for the victims’ families and Coroner Mark Lucraft QC thanked the three witnesses for their acts of bravery on November 29 2019.

Fishmongers’ Hall heroes break down recounting how they fought off terrorist