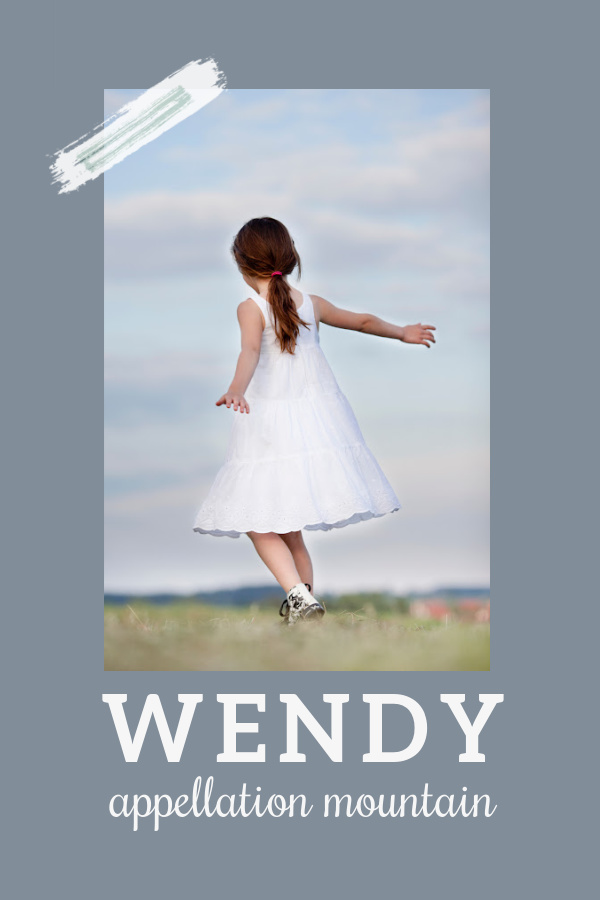 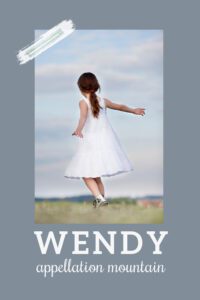 Thanks to Kristin and Lola for suggesting our Baby Name of the Day.

Long before we met the eldest Darling child, a handful of women and men answered to the name.

Odds are that the baby name Wendy shortened traditional names like Gwendolen or Wendell. But it also was recorded as an independent name in 1615 in Cambridge, England. Given the long history of Germanic names like Wendela and Wendelmar, it’s easy to imagine Wendy in use.

But until the year 1904, the baby name Wendy was virtually unknown.

That’s the year JM Barrie – a Scottish novelist and playwright – penned Peter Pan. The stories were first written to amuse the Llewelyn Davies boys, five sons of his friends Sylvia and Arthur. Both parents died young, leaving Barrie a legal guardian of the boys.

It’s said that Barrie borrowed Wendy from a nickname.

A 1911 novel, titled Peter and Wendy, followed the 1904 play. It’s the Disney animated classic from 1953 that cemented the characters in our imagination. Though adaptations and re-imaginings abound.

Wendy Darling remains mostly the same across the stories.

The big sister to Peter and Michael, she mixes sensible schoolgirl traits with a fanciful name and a daring streak. Unlike Peter, Wendy ultimately accepts that she must grow up. A sequel tells us that Wendy’s daughter, Jane, will eventually visit Neverland with Peter, too.

In the 1930s, English actor Marguerite Jenkins appeared in a string of box office hits. She continued to act into the 1940s, when she transitioned to hosting one of the first television talk shows.

Wendy was Marguerite’s middle name. And Barrie? It nodded to her godfather – JM Barrie himself.

The actor deserves credit for the name’s wider use.

In 1912, the year following the publication of Wendy and Peter, fewer than five girls were given the baby name Wendy.

In 1954, the comics gave us Wendy the Good Little Witch, a companion for Casper, the friendly ghost.

She graduated to her own book by 1960. The comics have continued into the twenty-first century.

Multiple adaptations have depicted Wendy, too, from movies to video games.

While this Wendy might not be top-of-mind this decade, we’re always just one reboot away from the character’s revival.

American parents have another use of the baby name Wendy that comes to mind: the fast food chain founded by Dave Thomas.

Thomas famously named his restaurants after daughter Wendy. Turns out that Wendy’s birth name was Melinda Lou Thomas – but as a child, she couldn’t quite say her name, and Wendy stuck.

Founded in 1969, the chain’s mascot is based on Wendy Thomas herself.

While the burger joint might give some parents pause, there’s no question that Wendy is a given name first and foremost.

Sometime after the witch and before the hamburgers, the baby name Wendy started to rise.

It fit with other popular late 1960s/1970s favorites. Wendy rode the school bus with Tammy and Sherri, Tina and Julie.

THE SHINING and MORE FAMOUS WENDYS

Along the way, quite a few famous uses of the baby name Wendy occurred.

If you know your classic horror movies, Jack and Wendy Torrance sign on to be the winter caretakers at the Overlook in 1980’s The Shining. It’s based on Stephen King’s 1977 novel.

The late Sister Wendy is a British nun who became an unlikely art expert in the 1990s, via a series of acclaimed documentaries on the BBC.

Actors include Wendy Richard of Are You Being Served? and EastEnders, as well as Wendie Malick from Just Shoot Me! and Hot in Cleveland.

Wendy O. Williams pushed boundaries as head of daring punk band The Plasmatics. Her edgy work earned her a Grammy nomination in 1985.

A different Wendy Williams has hosted a syndicated talk show since 2008.

As storybook as Alice, as sparky as Sadie, the baby name Wendy could fit right in to the US Top 100. Imagine hearing it in the company of Luna, Lily, and Willow; Ivy, Ruby, and Piper.

It may simply be that the baby name Wendy needs a few more decades of rest before it feels truly fresh and different again.

Because Disney’s live action Peter Pan and Wendy, starring Ever Anderson as Wendy – is due out in 2022. That might just herald this name’s return … a little earlier than we might have otherwise expected.

What do you think of the baby name Wendy? 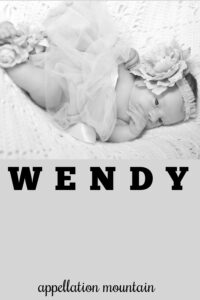