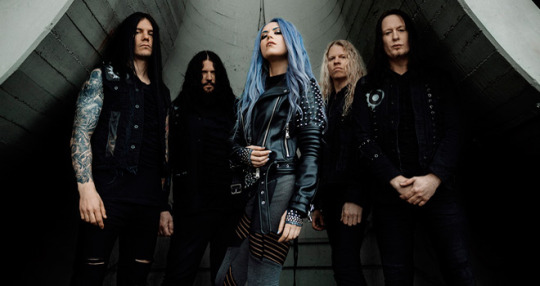 Band of the Week: Arch Enemy

I first heard of Arch Enemy when my dad showed me the music videos for My Apocalypse and Nemesis. We were both in awe of the talent that this band had (and still has). They have melodic death metal down and create beautiful songs that have amazing harmonies by the guitars and vocals. The first time I saw Arch Enemy was at the Masquerade in Atlanta, Georgia. My dad and I traveled down there just to see Arch Enemy! We got VIP tickets and were able to meet the band! They are so nice and down to earth and are very thankful for their fans supporting them through the years (will link the picture and album review of this show when I upload this).

Arch Enemy is a Swedish melodic death metal band that formed in 1995. The band was originally a supergroup with members from Carcass, Armageddon, Carnage, Mercyful Fate, Spiritual Beggars, The Agonist, Nevermore, and Eucharist. The mastermind behind Arch Enemy is Michael Ammot, (Carcass, Carnage, and Spiritual Beggers) who created Arch Enemy once he left Carcass. This band is known for having some of the best female vocalists and has really influenced women in the metal scene to get more involved. I know as a young girl watching Arch Enemy, seeing a badass female perform high screams and deep low gutterals was great to see and influenced me to do more within my metal community. The band was originally fronted by Johan Liiva, but was replaced by Angela Gossow (a German vocalist) in 2000. Gossow left the band in 2014 to become the band’s manager and was replaced by Alissa White-Gluz (a Canadian vocalist).

Arch Enemy’s musical style has been classified as melodic death metal, but their sound has a unique blend of progressive and death metal influences. Their influences are cited as Iron Maiden, Judas Priest, Black Sabbath, Manowar, Metallica, Megadeth, Slayer, Testament, Pantera, Death, Obituary, Carcass, Mercyful Fate, and King Diamond. You can hear these influences in their songs when listening to the melodies and harmonies of the guitars. They have mastered their own sound and I love the progression that Arch Enemy has taken.

My Apocalypse, Nemesis, Bloodstained Cross, The World Is Yours, First Day in Hell, The Eagle Flies Alone, As the Pages Burn, War Eternal, and You Will Know My Name.

Have you seen Arch Enemy live? What are some of your favorite songs?

Band of the Week: Arch Enemy