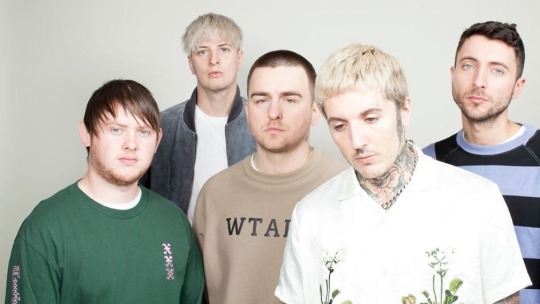 Band of the Week: Bring Me The Horizon

The first time I heard of Bring Me The Horizon (BMTH) was years ago with their debut record, Count Your Blessings (2006), when my brothers would listen to it and I loved their sound.  I got to see BMTH once at the Carolina Rebellion and boy, let me tell you, they put on one hell of a live show. They probably have one of the best stage performances that I have ever seen.

Bring Me The Horizon is a British rock band formed in Sheffield in 2004. They signed to Columbia Records exclusively in the United States. The band released their debut album, Count Your Blessings in 2006. Their sound was new for listeners and they were met with critical disdain. Critics may not have liked their album, but I loved their heavy hitting, ass beating sound. Their second release, Suicide Season (2008), was a creative, critical, and commercial turning point for the band. With later releases, they changed their style with more influences from classical, electronic, and pop music. BMTH is easily one of the most musically diverse bands I have ever listened to. They have changed their sound so much over the years of their existence and they are the only band (in my opinion) that can change that much and still make great music. Even though I am a fan of BMTH from their album Sempiternal to their first release, they never fail to keep fans on their toes with their evolution. I am willing to bet that they can make any type of album, and it will be an awesome album.

BMTH’s earliest influences were bands like At the Gates, Carcass, Pantera, Metallica, Every Time I Die, and genres such as death metal, grindcore, and emo. Their sound has developed from that starting point and now are influenced by progressive rock, post-rock, dubstep, and electronic. With their changes in influences, it can be seen that BMTH has always attempted to grow and change with each album, believing that they should be different.

Have you seen BMTH? What is your favorite song by them?

Band of the Week: Bring Me The Horizon