Three years ago out of the fog of Covid emerged a monstrous Houston Vert Ramp, standing at 13’ tall and 60’ wide sitting under a huge hanger in the backyard of Scott Arnebold. Every November, starting in 2020, Scott and his team opens his property to skaters, sponsors, and vendors with an emphasize on local community involvement. This event is so much more than a Jam, it’s a community building, family friendly event, and the best skate-family punk reunion Texas has seen since the Glory-days.

The Banger in the Hanger, now in it’s third year, brings us all back to those Glory-days of Texas Skateboarding during the Mid 80’s. Texas has such a rich history of pros and ripping locals, together with a punk-influenced skate scene. From 84’-93’, I was lucky to have witnessed Shut Up And Skates, NSA competitions, The Clown Ramp, Jeff Phillips Park, and my regular, the skatepark of Houston. I remember when pros from California and all over the world come to Texas and realize Texas was doing vert bigger, more powerful, with more style, and more badass than they had ever seen. The SPOH 12 foot tall fast Kahuna ramp with a steel finish allowed the locals to blast airs unlike never before. Then came the Hurricane ramp at 40 ft wide with a roll-in 3 feet higher than the deck. This ramp was so popular, cars parked up and own the neighborhood streets. Skaters packed the ramp and anywhere they could for a view. Unlike other events, they were able to mingle freely and share stoke alongside their vert heroes. As the vert scene basically went into hibernation in the mid 90’s, all these type of events faded. Now we have the Banger in the Hanger Event. 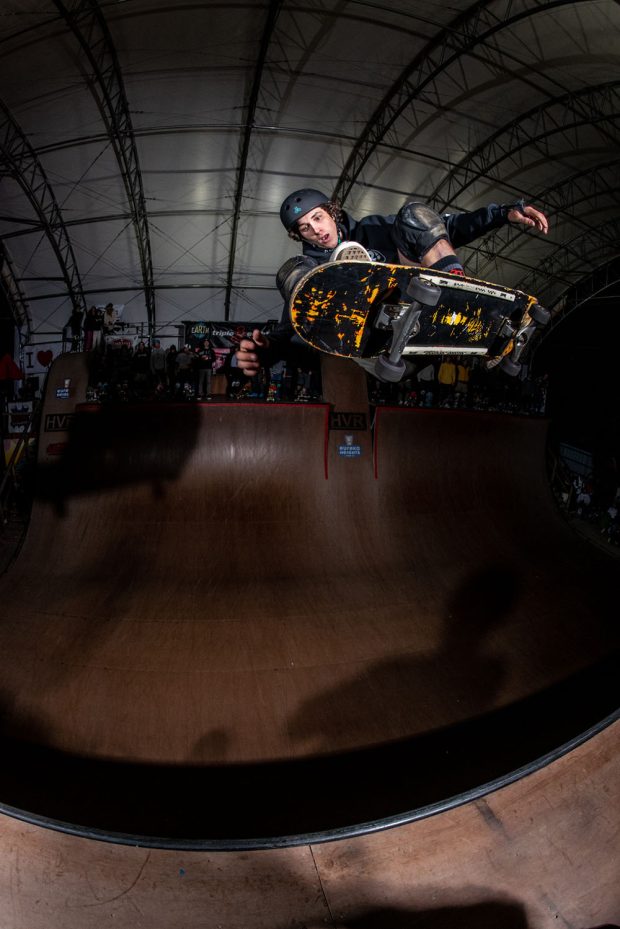 The first day of the two day event started on Friday. An all-day jam with open yet “Preferred” sessions started with groms, masters, women and then pro preferred. Any skater was welcome to participate while young rippers could be seen floating overhead high airs and showcasing their insane bags of tricks. Vert’s youth has a solid future.

Texas weather can change at the drop of a hat. Rain with strong winds was in the possible forecast, yet Scott and his team were well prepared. The Ramp crew lifted a huge tarp screen extending from deck to deck blocking most of the rain keeping fans, skaters and the ramp dry. Brilliant! Scott provided weather updates online keeping everyone in the know, with positive and a hyped atmosphere. This allowed skaters to keep riding while everyone sought out shelter on the decks and under vendor tents. Worked out well for the vendors. 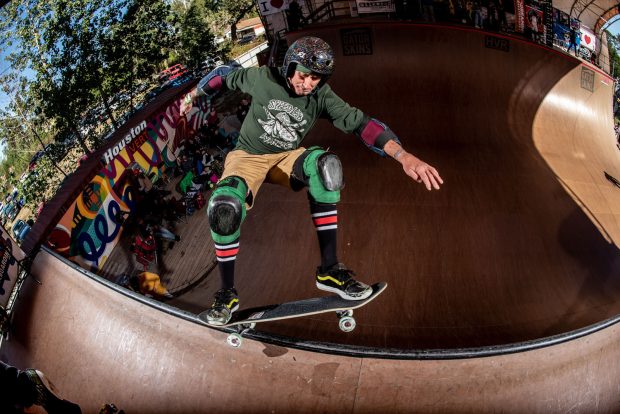 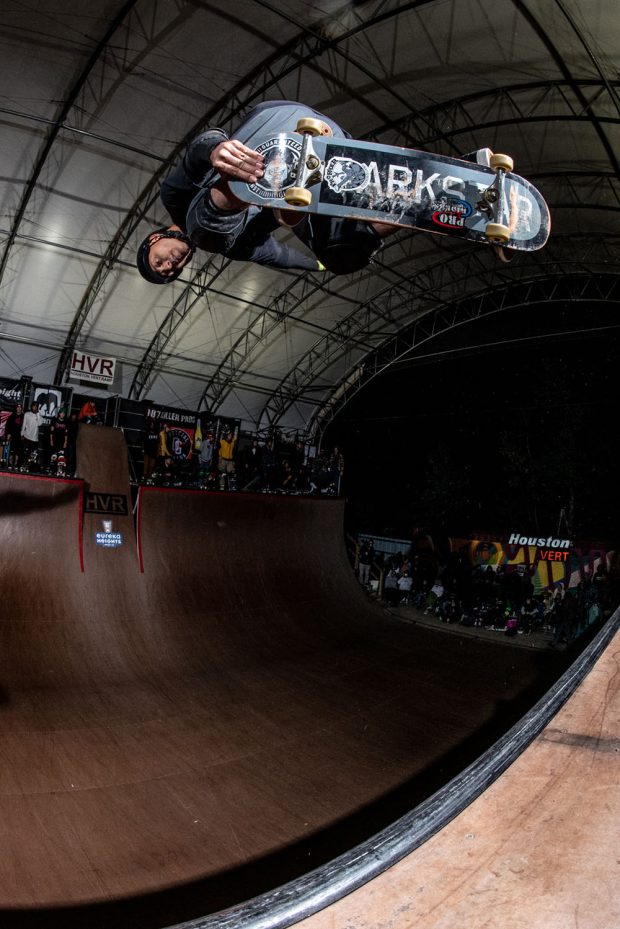 Full sun with brisk temps on Saturday reminded us the reason Texas Skateboarding is best in November. You could feel the energy building as more skaters began to fill up the decks and the crowd gathered below. Something was brewing as two metal-forged ramp attachment features arrived, as well as a massive height ruler. The Banger ruler is set at ½ foot increments up to 13 feet high with a movable arrow to mark the highest air. Which now has become a permanent fixture adding to allure of this ramp. Seriously freaking impressive. There was certainly a larger crowd than the previous years. The free beverages were flowing, live DJ was pumping and the whole place was charged.

Everyone got their runs without peril during the preferred sessions, showcasing groms, masters, women, then pros. All great appetizers leading up to the main show, starting with women’s best trick where Lilly Erickson battled the “wide as she is tall channel gap” earning the cash prize. Then the channel box was installed for the Pros where Tom Scharr won the oversized check. Now, came the “Big Air”. Roll-ins were cleared so the riders could get more speed. With cash offered, everyone seemed to find a second wind to try to get bigger airs. The ladies were pushing 4’ to 5’ airs with the highest one from Aaliyah Wilson from Australia.

Several of the men were flying up 7’ to 9’ airs. However two stood out, Collin Graham and Jeromy Green were reaching 11’ to 11.5’ . Out of breath, smiling, tired, they proclaimed their legs done. But, with cash gathering below the announcement came there was another $300 plus for going 12’. With jaws wide open, the crowd watched the two of them fearlessly try after try to attempt to achieve 11.5’ or higher. After consideration from every photographer’s angle, it was decided a tie.

Banger in the Hanger was amazing on every level, reaffirming that the Texas “Vert Glory” is back for good. Mark your calendars for Nov 10-12, 2023.