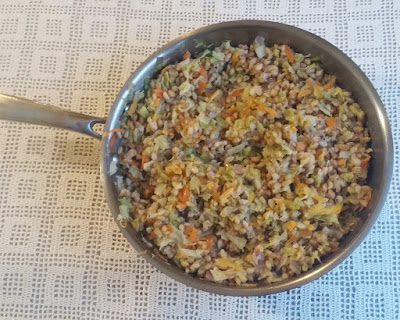 Well, here it is - about 1/4 of our entire barley harvest from last year. I have to say it tastes like barley, but it took longer to cook. I've given times for the more usual purchased barley, but I was caught a bit unawares by how long ours took. However, the great thing  about barley is you can just add more water and carry on, so I did.
This is still a bit slow to make, but none of it is hard; you just need to keep an eye on things, especially as the liquids cook away. And while this is not a one-pot meal, it only needs some simply-cooked protein to finish the menu.
If you have any leftovers, treat them as instant soup - add a sufficient quantity of chicken or other stock, and bring it to a simmer.
4 to 6 servings
1 hour to cook the barley
45 minutes other prep time

Cook the Barley:
1 cup barley
1 teaspoon salt
3 or 4 cups water
As ever, put it all into the rice cooker and cook. It can be done on the stove-top as well, over medium-low heat to keep it at a slow simmer, but you will need to keep a watchful eye on it. It should take about 45 minutes to an hour.
Cook the Barley & Vegetables:
4 cups very finely chopped Savoy cabbage
1 large carrot
1 large onion, red if possible
2 tablespoons finely minced fresh dill
OR 2 teaspoons dry dill weed
salt & freshly ground black pepper to taste
1 tablespoon mild vegetable oil
2 tablespoons butter
1 to 2 cup chicken or vegetable broth, OR barley cooking water
Wash, trim, and chop the cabbage finely. Peel and grate the carrot. Peel and finely chop the onion. Wash, dry, and mince the dill, if you have fresh dill to use.
Once the barley is cooked, heat the oil and butter in a large skillet over medium heat. Add the carrot and onion, and cook, stirring regularly, for several minutes until wilted and reduced in volume, but don't let it brown. Add the cabbage and cook for another 5 to 10 minutes, stirring regularly until it too is wilted and reduced in volume.
Add the dill and other seasonings, and mix in the hot barley. Mix in the broth or cooking water, and bring the mixture to a simmer. Simmer until the broth is absorbed or evaporated; about 10 to 15 minutes. Stir occasionally, more towards the end. Serve at once, garnished with a little more chopped dill if you like.
Source: seasonalontariofood