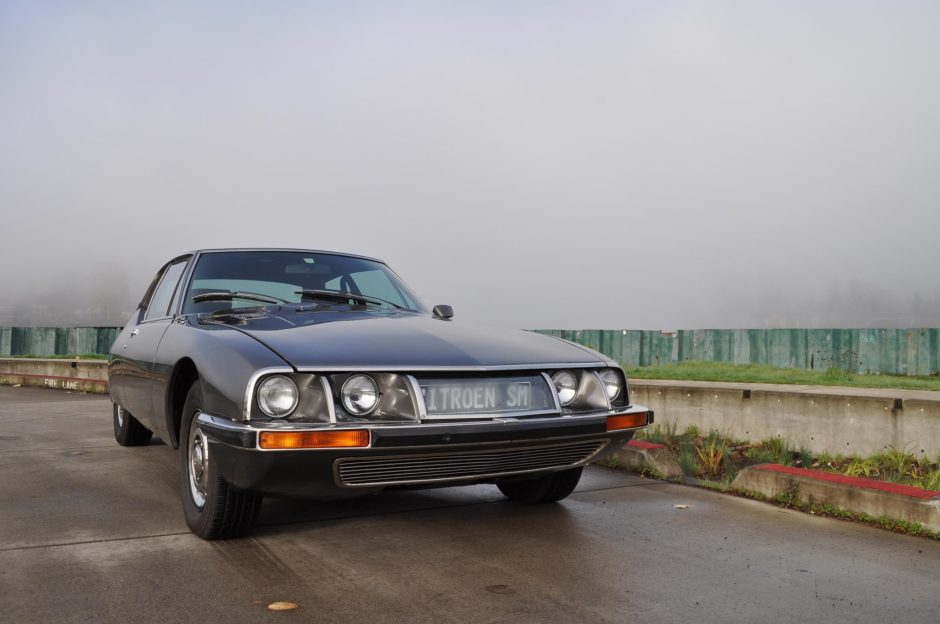 As I write this in mid-December 2021, it’s hard to believe six months have gone by since my last installment. At that point I was just about ready to call the SM project done. But the car, or The Fates, or whatever higher power didn’t agree with me that we were, in fact, done.

I was at a friend’s garage using his welder to repair some rusty spots in the trunk floor. While sweeping up after a productive morning, the car slowly rolled away, traveling about twenty feet and coming to rest with an excruciating CRUNCH against the door frame of my buddy’s garage. See Chapter X for the gory details. 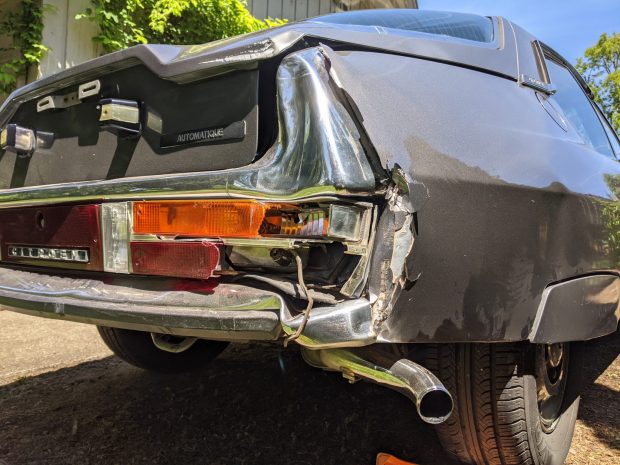 From there, it took a few weeks to find the right body shop to straighten or replace the rear quarter and repaint the car. I briefly toyed with the idea of having the whole car stripped and painted. Few shops that looked at the car were even willing to take it on. The main drawback was time. Noone would commit to focusing on the car, or commit to anything resembling a firm timeline.

With an ongoing Land Rover restoration project unravelling and another project car due to arrive in the spring of ’22, the thought of an open-ended bodyshop project (with cost and timeline TBD) simply didn’t seem like a good idea. And I’m saying that as a guy that’s pretty good at twisting reality and logic in order to justify my car projects.

So I opted to have the damage repaired at a local shop that does restoration work as well as collision repair. At the bodyshop, the SM joined a couple of longhood 911s and E9 BMWs – a lone Frenchman surrounded by Germans. Each about the same age, and each could conceivably have been comparison-shopped by someone looking to drop $10k on a sporty 2-door back in the day.

I dropped off the SM in early July, and the always helpful David Hume at Excelsior Motors shipped a pallet of NOS and used repair parts: shiny stainless steel bumpers, trim, a hatch, rear lights, and various seals. Hurry up and wait. 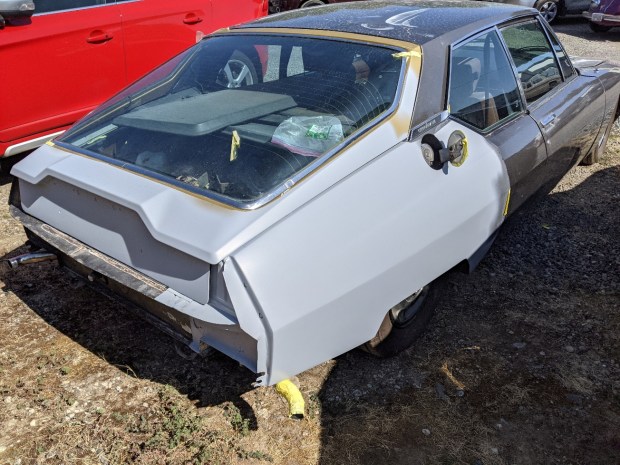 As usual, the bodyshop took quite a lot longer than originally planned, although they did stick to the original budget of just over $11k inclusive of parts & labor. That was ok, as we had had a busy summer, and with the SM gone there was more bandwidth to make progress with the Land Rover project. The body shop ended up pulling the quarter panel straight (after some debate about replacing it), and painted the repaired rear quarter plus the hatch and the entire roof.

In the meantime, I did fit in some Citroën adventures, including a visit from my good friend Sean, who got this gold SM on BaT last year and has been getting familiar with it ever since. He drove it up from the Bay Area to join a weekend tour with a group of friends. It was a total hoot and Sean jumped in with both feet. 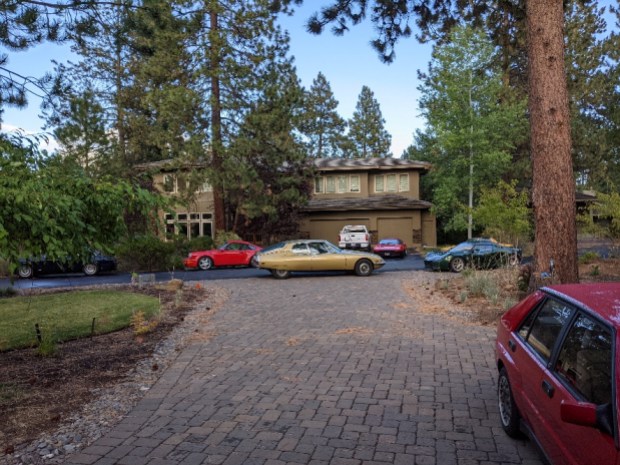 While my own SM wasn’t able to attend, Sean’s provided ample amusement and was often the center of attention. We even witnessed what could only be described as an illicit deal for NOS Citroën parts going down in a park somewhere in southern Washington. 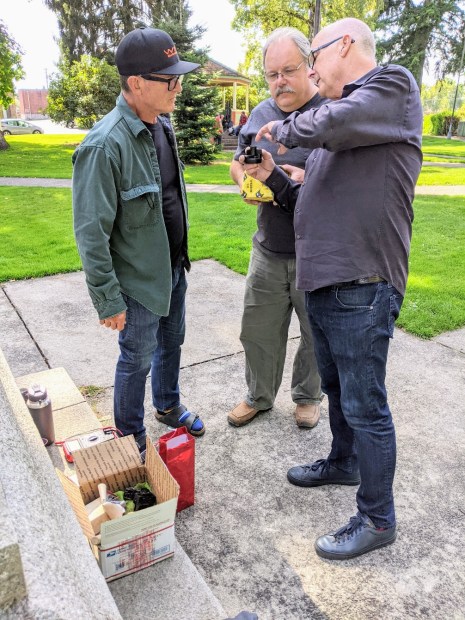 In October, my SM was finally ready to be picked up from the shop – just in time for the end of nice driving weather here in Oregon. Not having driven the car for a few months, I’d forgotten how cool and unusual it is visually and dynamically. With the car back at home, I focused on sorting the last few things.

At the top of the list were a few items that I really wanted to resolve before moving on. The water pump had a small and intermittent leak, the electric fan wiring wasn’t quite right, and a new problem had presented itself – the battery/alternator couldn’t keep up with the accessories. More on each to follow.

Water pump – the Maserati water pump is pretty elegant, if not downright steam-punk. It uses a brass impeller driven by a jackshaft, with a carbon seal and weep holes to relieve excess pressure. It is a low-pressure system with an expansion tank – the cap is only rated for 4 psi. The main challenge with the system is that it’s oriented on the front of the motor in a Maserati…which means that it faces the firewall in the SM. Accessing the water pump isn’t complicated, but it’s not easy or convenient, either. In my case mirrors were involved. Replacing the seal fixed the coolant leak, and is one of those jobs that would take one third as long the second time. 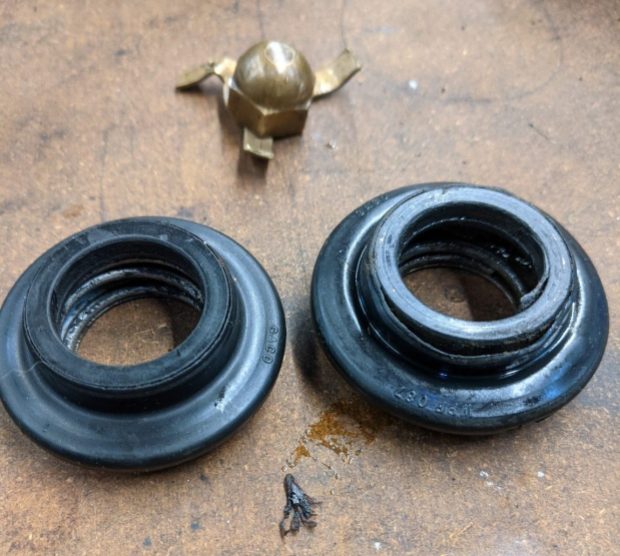 New seal on the left, leaky old one on the right.

Fans – the SM designers prioritized aerodynamics over cooling. So while the car has a very large radiator, it also requires two large electric puller fans controlled by a thermostatic switch (in my case I installed a 85ºC Merak switch), or by turning on the interior fans. Even when the car is running at highway speeds the fans are often running. Looking at the engine bay, there are no heat/air extraction vents, the hood is sealed at the windshield base, and undertrays effectively smooth airflow across the bottom of the car. How may early ‘70s designers were spending wind-tunnel time tuning airflow underneath the car?

So although I’d replaced all the wiring harness circuit breakers and relays in the front of the car, there was still a problem with the temp switch energizing the fans. With Roland HF’s support, we diagnosed a grounding issue and got the fans working as designed.

As a bonus little modern touch, Roland hooked me up with one of his custom Bluetooth amplifiers. It fits neatly in the Gitanes/Gauloises ashtray, beneath the OEM rollback cover. He also designed the wiring to connect to the existing power and 3-speaker wiring. I had been keeping things as reasonably OEM spec as possible, but this was a modern indulgence. I don’t really care about or use radios in my other old cars, but the SM is a nice relaxed place to listen to music. The amp is a super clean, easily-reversible installation. So the OEM port-installed Motorola AM/FM head unit remains in it’s place, with the OEM speakers now connected to a modern WiFi-enabled amp.

When I started using the car regularly in November the final puzzle presented itself – and as always, this car’s sense of occasion is tough to beat. Several friends and local BaT-istas had been following my story, helping out and generally checking in on the project, most often from a safe distance. PDXBryan was among them, and we’d met a few times before to talk cars. He’d casually mentioned being Citroën-curious, and I’d been saying I’d stop by someday so he could give it a go.

A couple weeks ago on a rainy, dark Saturday afternoon I ventured out to Bryan’s farm, which is about 20 miles east toward Mt. Hood. The car was gliding along on the two-lane rural roads leading out to his place. The sun set, the rain picked up, and it was as dark as the inside of a cow. Lights on, fans on, windshield wipers, Bluetooth playing period-correct music. On the last climb to Bryan’s I smelled the unmistakable smell of burning rubber, heard a belt squeal and quickly found a place to pull off. Hood up, and there’s the alternator belt, melted to the main pulley. It’s dark, raining, and I’m 20 miles from home. On the bright side, I have my travel tool kit and a spare belt. 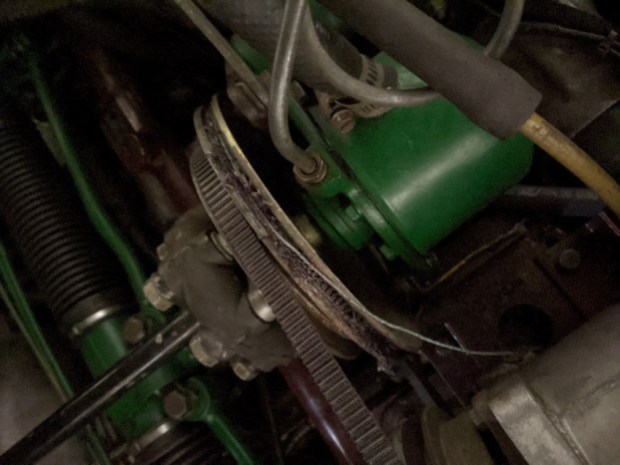 So I roll the dice and get the car to Bryan’s farm shop with the battery light glowing and car just barely running. Not the arrival and first impression I was going for, but there we are. Bryan was incredibly gracious. We caught up on his TDi-powered Volvo wagon and Datsun 510 wagon projects while I installed the new belt. And then we were off for his first ride in a Citroën.

Before I could hand over the controls, the second belt snapped, most likely due to improper tension. Bryan was a total trooper about the whole thing and graciously stood in the rain with me waiting for the flatbed (number three for those not counting) to arrive.

Over the next week I worked with the guys at Auto Battery & Electric (ABE – highly recommended if you need alternator, starter, or battery-related help with an old car) to determine the fault. Prior to this trip I’d only been driving the car in nice weather during the day, without many accessories running. The alternator and battery were adequate for those conditions. But with the headlights, wipers, fans, and other accessories running, it quickly and decisively exhibited two weaknesses; the alternator (an aftermarket Bosch unit) was not supplying enough amps to the battery, and the battery was on its last legs. Together they couldn’t keep up with the increased load.

We couldn’t find a core to rebuild an OEM Paris Rhone alternator, so I opted to install an aftermarket Delco SI-series alternator paired with a new Group 27 battery. Also, the recommended 7mm x 775mm PolyFlex belt is not easy to source and prone to melting if not properly tensioned. So I experimented with a few locally available Gates belts. The best option seemed to be a ¼” or 6mm x 775mm Gates TruFlex v-belt. With the new alternator, battery, and belt, all systems are go even with accessories running.

The next weekend, I dropped by Bryan’s again and we completed the mission. 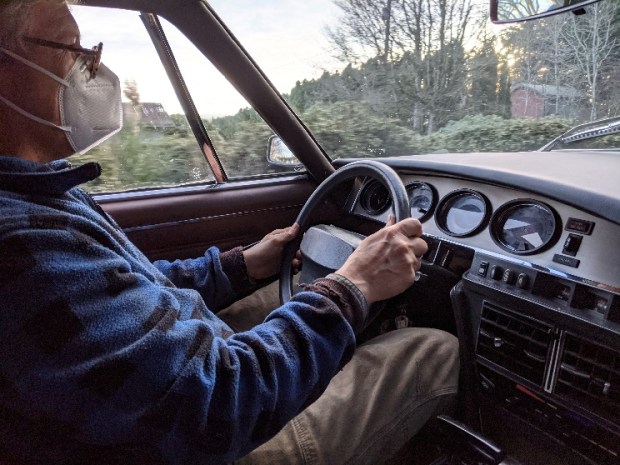 The past few weeks I’ve been driving the car around, simply enjoying it for what it is. After two years of work, I feel really good about having turned this car around. It’s one of those projects where, if I had known the path I’d be on from the day it arrived, I’d likely have parted it out and cut my losses. That’s not how it played out. At each point of the process there was a reasonably clear path to a resolution. The car  didn’t reveal all of its issues all at once (or more likely I didn’t have the marque experience to see or interpret what the car’s condition was telling me).

But that’s how it played out, and it is now a viable, running, driving Citroën SM. The ride and handing have been described so well by so many journalists over the years, so I won’t get into that. The best I can come up with is to say it has a sublime, aquatic quality. I wonder if Jacques Cousteau ever owned one back in the day… The brakes and steering are unlike anything you’ll experience, and may have you questioning whether conventional cars – even modern ones – compare favorably. And the torquey 2.7/3.0 motor (even when paired with the 3-speed automatic) pulls pretty strong for a relatively big, 50 year-old luxury car. 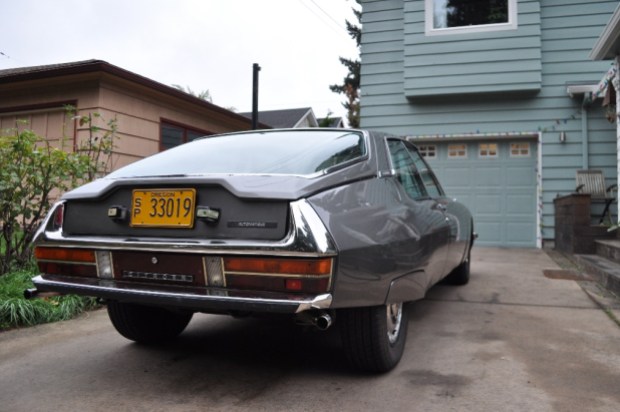 It’s now a running, driving SM. And it will be up on BaT soon, ready for the next person to drive, fettle, and enjoy.

We’re glad you saw this project through, CrosslePDX, and happy to have closure on this epic journey! Thank you once again for detailing your experience and sharing your hard-won knowledge with the BaT community.

We love hearing all your BaT success stories and project updates. If you’s like to share your personal experience, please send a few lines and pictures to mail@bringatrailer.com. We’ll send you a $50 credit to the BaT Gear Store if it ends up on the site.