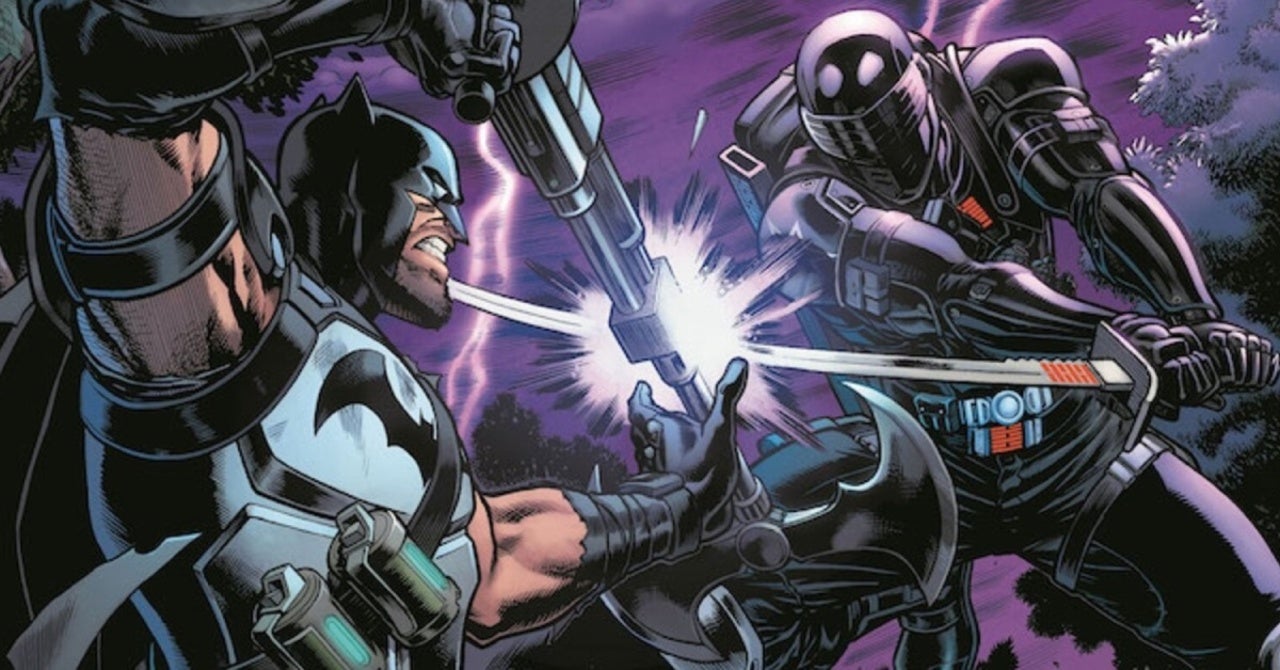 Batman/Fortnite: Zero Point #1 arrives in comic book stores today, kicking off an unprecedented new crossover within the Fortnite universe. The comic miniseries will see a number of DC Comics characters, including Batman, Catwoman, and Harley Quinn, being thrown into the Fortnite universe, and crossing over with the Battle Royale game's ever-growing roster of characters. One of the confirmed centerpieces of the comic thus far has been a match-up between Batman and GI Joe antihero Snake Eyes, the latter of whom canonically entered Fortnite in its last season. The idea of Batman and Snake Eyes crossing over, which is expected to happen in issue #3, has definitely appealed to a number of people (even those who aren't familiar with Fortnite), and according to the series' creative team, it'll be worth the hype.

"We always knew we wanted to have, if possible, a crossover with someone outside of the DC and Fortnite universes, if we could pull that off," Zero Point writer Christos Gage revealed during a recent virtual press conference attended by ComicBook.com. "There were very nice discussions with what would be a fun character who can we actually use, and Snake Eyes ended up working out. And I think it was great, because he already does it talk. So I would say that part's awesome. It really comes together pretty well."

"You've got literally two of the greatest fighters in the world or in any universe facing off with each other. It's like a dream team for a fan," Gage continued. "It's the kind of thing that you debate at the comic book store -- 'Who would win a fight between these two? But we will never actually see it.' Okay, well now you're going to get to see it. I think that worked out really fun. And what's interesting to me is some of the reactions -- you've had a lot of younger people, who are being brought into comics by Fortnite. And at the same time you've got, I've seen comments from a lot of people my age, who have said 'I don't play Fortnite, but I'm dying to see Batman fight Snake Eyes, so I'm going to pick up this mini-series.' It would be great if some of the Fortnite fans said, 'Hey, I'm really enjoying this. I'm going to seek out some other comics.' And by the same token, some of the people who just want to see Batman fight Snake Eyes say, 'I'm going to try out this game and go in and beat up Christos and Reilly, because they're so bad at it.'"

For Zero Point artist Reilly Brown, the idea of a Batman/Snake Eyes fight had to be approached from that similar sort of larger-than-life quality, especially within the existing parameters of Fortnite.

"It was a lot of fun drawing them fighting each other, because like you're in a situation where it's just an island full of people fighting all the time, and they're all pretty much badasses," Brown explained. "So the challenge was, 'How do I really sell it that these two are badasses is among the badasses?' These guys, their fighting abilities are so above and beyond everybody else's. So there's a lot of like, it's like, 'Okay, can I have him jumping out of a car, while kicking the guy and throwing a Batarang all at the same time?' And just how impossible can I make this fight look, so that if anybody reading it would say, 'Oh yeah, that's not something that Cuddle Team Leader could do. Only Batman and Snake Eyes can fight like this. And so that was a lot of fun.'"

"In the entire series, that issue is the only one with double-page spreads in it," Gage added, "which was, partly to showcase the widescreen spectacle of that type of fight."