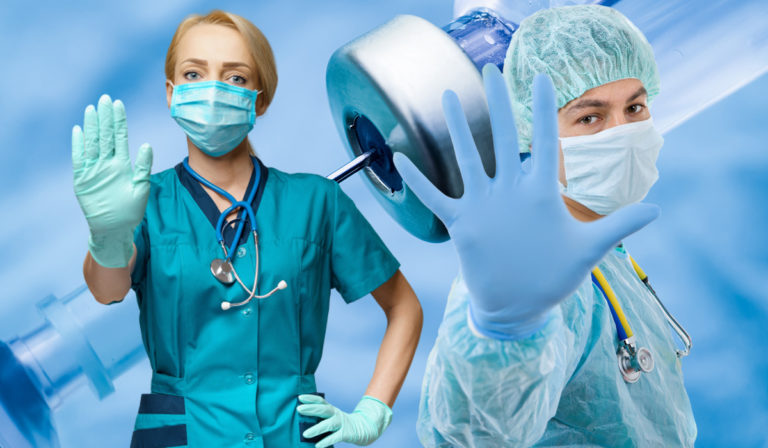 As an Orthodox Christian, you oppose abortion. You are aware that the COVID vaccines all made use, in some way(s), of aborted fetal cells. Despite the fact that some sources still lie about this, having done your research, you know the truth and have applied for your religious exemption. If you are lucky, it is approved. If you are not lucky, you may get a request for additional information.

HR may pose as your friend, but rest assured, they are not. Treat HR like a police interrogation. The more information you provide, the worse it is for you. Exercise your right to privacy as much as possible. The questions below are an example of what you could get from HR with some suggestions as to how to approach them. Remember – if in doubt, an attorney is often a very good investment.

Please provide the following information so that we may engage in appropriate interactive dialogue to determine how best to meet your needs as well as those of the company and its employees.

Your need is for a religious exemption, which they could have readily granted. This is not a dialogue that will be in your best interests. HR may pretend they just want to understand your request better. The truth is usually that they are looking for ways to deny the request. Don’t make that job easy for them by trusting them too much.

1. Please describe the nature of your objection to the COVID-19 vaccination requirement.

The key aspect of your request is that you have a sincere, deeply-held religious belief opposed to abortion and the use of aborted fetal cells. That is the only thing that matters, and that is what you must emphasize. HR will have difficulty attacking that belief directly, but they could try to trip you up with  other questions to weaken your case. You do not need to defend your religious belief. Keep stating it, and keep emphasizing the sincerity and deeply-held nature of it.

2. Would complying with the COVID-19 vaccination requirement substantially burden your religious exercise? If so, please explain how.

3. How long have you held the religious belief underlying your objection?

None of their business. What they are looking for is to build a case that you suddenly “found” this religious belief to avoid the jabs. If you want to answer this question, then tell them you have been opposed to abortion and the use of aborted fetal cells your entire adult life. Otherwise, feel free to tell them that you have a sincere, deeply-held religious objection to abortion and use of aborted fetal cells and you do not wish to discuss your religious beliefs further.

4. Please describe whether, as an adult, you have received any vaccines against any other diseases (such as a flu vaccine or a tetanus vaccine) and, if so, what vaccine you most recently received and when, to the best of your recollection.

Your medical history is none of HR’s business. You should state that you do not discuss your private, personal medical history with anyone. What they are trying to do, the same as the U.S. Coast Guard (for example), is to trap you into admitting that you have taken other vaccines which used aborted fetal cells. If you have, that fact can be used to paint you as a hypocrite that only lately came to oppose the use of aborted fetal cells to avoid the mRNA jabs. Further, they can use this fact to try and convince you that you are already morally compromised, so why not just take another couple of shots? An Orthodox physician, in this article, explored how use of aborted fetal cells was originally covered up by Big Pharma. Even prescribing physicians did not know the extent to which many modern medicines used aborted fetal cells. The fact that you unknowingly may have submitted to tainted vaccines in the past does not mean you must do so again. We highly recommend asserting medical privacy here.

5. If you do not have a religious objection to the use of all vaccines, please explain why your objection is limited to particular vaccines.

You have a sincere, deeply-held religious objection to abortion and the use of aborted fetal cells. Continue to repeat it.

6. If there are any other medicines or products that you do not use because of the religious belief underlying your objection, please identify them.

Again, as noted by an Orthodox physician in this article, there appears to be widespread use of aborted fetal cells in many products and medicines. There is controversy, however, over quite a few common drugs as to whether they are tainted or not. It is entirely possible that vaccine proponents are overstating the extent to which aborted fetal cells are being used. See this article, for example, for a discussion of some drugs that are said to be tainted, but which were developed before aborted fetal cell lines were even available. Below we have shown you a list of counseling questions for chaplains in the U.S. Coast Guard to talk sailors out of a religious exemption by highlighting all the drugs supposedly tested / developed using aborted fetal cells.

Do not take the bait on this question. This is not HR’s business. You do not discuss your personal, private medical information with anyone. What drugs you take, what drugs you avoid – none of that is relevant. The only medicines at issue are the COVID vaccines. You have a sincere, deeply-held religious objection to the COVID vaccines. No other drugs should be discussed.

7. Please provide any additional information that you think may be helpful in reviewing your request.

You have a sincere, deeply-held religious objection to abortion and use of aborted fetal cells. Nothing else matters. Nothing else needs to be said. Do not give them any other information.

Two other things to also consider. First, there is no federal vaccine mandate. But, you might ask, didn’t Biden announce one? He announced that OSHA would be formulating a mandate, but that has not happened yet. In anticipation of a possible federal rule, many companies have gone ahead and implemented a mandate. They are not answerable to the government for their mandates or for their religious exemption policies. Not yet. Maybe not ever, as Biden seems to have gotten most of what he wanted just through threats and intimidation. If you have issues with your employer, then an attorney could help as you are not fighting OSHA, you are fighting your employer. There could be local or state mandates for certain industries such as health care. These mandates may not recognize religious exemptions in all cases, so you may end up in court fighting a government after all. But it won’t be the Federal Government.

The other thing to keep in mind is the COVID narrative is failing fast. The vaccines are daily proving less effective than originally stated. New treatments are coming online. Countries around the world are opening up fully, with no vaccine mandates. Highly vaccinated areas are awash in COVID illnesses. Time is against the vaccines. Do not give up your moral objections. Do not let them bully you into compliance with what you know is wrong.

Nicholas – member of the Western Rite Vicariate, a part of the Antiochian Orthodox Christian Archdiocese in America