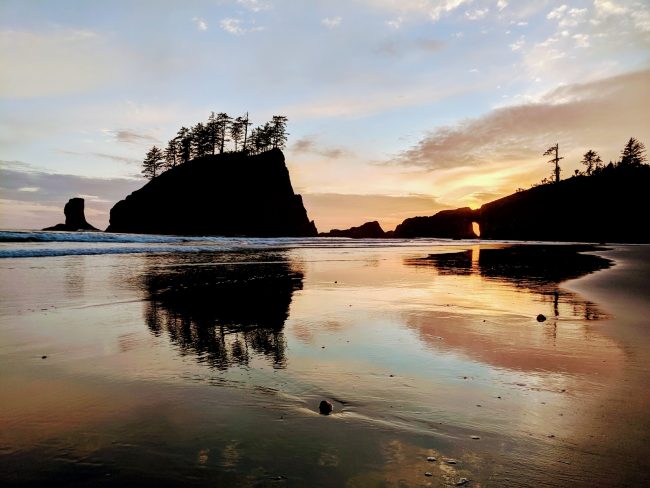 What are you capable of?

Sometimes, the best reason to do something is simply Because You Can. What are you capable of doing?  Why aren't you doing it?
Click To Tweet 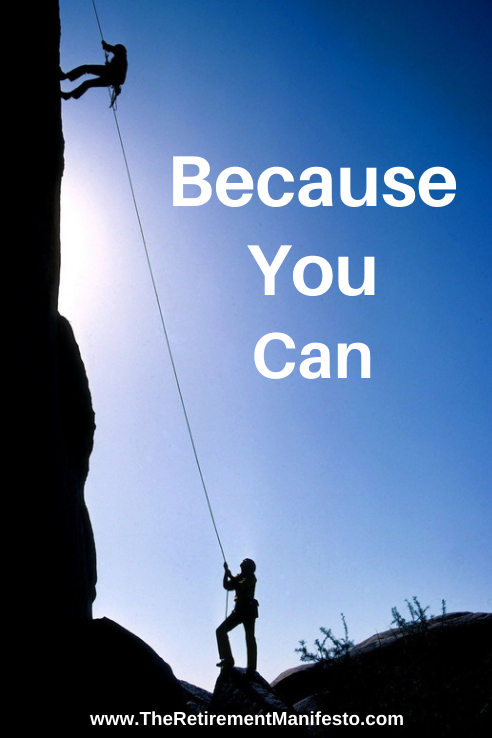 I went for a swim in Lake Blue Ridge yesterday, because I could.  It’s a gorgeous body of mountain water near our retirement cabin, and I’m looking forward to some cold water swimming this Fall. I developed the outline for this post during that swim.  Funny how that works.

The seed for this post was planted by a question Physican On Fire posted on his fatFIRE Facebook Group.  He asked, “What’s the best thing that happened to you this week?” 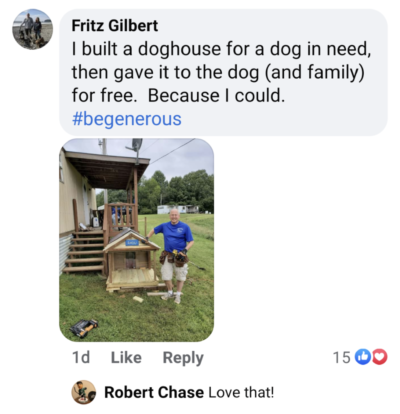 Giving away that doghouse was, indeed, the best thing that happened to me that week.

As I swam, I thought about that Facebook post.  I started thinking about the things we do.  About the things we could do, but don’t. I realized the impact we could have if we decided to do more of the things we are capable of doing.  When I got out of the water, I sent myself a quick email with a general outline, and this post was born.

I came up with the following ideas:

Be Generous, Because You Can

If you’re reading this post, the reality is that you’re most likely “better off” than the average person.  It’s likely you have the means to help others.  You have the opportunity to be generous.  Are you taking advantage of that capability?  The world has a lot of people in need, especially this year.

Consider increasing your generosity.   Are those restaurants finally opening in your town?  Give that waitress a 100% tip, she’s been out of work for months.  Do you have a local food bank?  Write them a check, they’ve been hammered this year.  Do you have a sick friend?  Buy (or make) a dinner and deliver it to their house.

You can afford it, and it’ll mean the world to the people you’re helping during tough times.

They say the greatest reward goes to the giver, and I can attest to that fact in my own life. I’m trying to be more generous in my retirement.

Do Something New, Because You Can

I recently read an interesting book titled “On With The Butter” (affiliate link), in which the author tells an amazing story about her mother.  On her 93rd birthday, “Mom” announced she was kicking off a “Never Too Old” year, where she was going to do 93 new things to celebrate her 93 years of life.

She did it, and the book outlines every one of the 93 new things she did (including ice climbing, a television interview, dying her hair red, and 90 other amazing things).

A 93-year-old lady did 93 new things in her 93rd year of life. Because She Could. What's stopping you?
Click To Tweet

If a 93-year old woman doesn’t inspire you that you’re never too old to try new things, nothing will.

So, try something new.  Even better, try to do your “age” in new things over the coming year.

Make Something, Because You Can

For the first 56 years of my life, I had two left thumbs.  I could hammer in a nail (usually), but that was about the limit of my woodworking skills.  And yet, I always wanted to learn.

After a memorable few weeks helping a master builder build a doghouse (and creating this YouTube video so others could learn from the master), I caught the fever.

I wanted to make things.   I pursued it, because I can.

As a result, I had a woodworking shop and writing studio built at our cabin, taught myself how to epoxy coat a cement floor,  installed wood flooring, and built my first doghouse.

I’m nowhere near done making new things.  My latest project is finishing my woodworking shop. I just built this folding work station, repurposing an old drafting table in the process.  This week, I’m working on building a miter saw station.

I’m having a blast, and it’s rewarding beyond words to see something you’ve built with your own two hands.

Do you have an interest in making something?  Pursue it!

See New Things, Because You Can

What is one thing you’ve always wanted to see, but haven’t yet seen it?  Do it now.

We’ve made travel a priority in our retirement and have enjoyed a 7,000-mile train journey, a 10,000 mile Great American Road Trip in our RV, and a nice trip across Michigan’s Upper Penisula.  We’re nowhere near done traveling, and will be announcing our latest adventure in next week’s post (it’s a doozy, stay tuned!).

Get Fit, Because You Can

During our working years, it was difficult to find time to exercise.  In spite of that, I worked out 3+ days a week for the final 20 years of my career.  I made it a priority, and I found the time.  If you’ve been lax in exercising while working, what’s your excuse now?

If there’s ever a time in your life when fitness matters, it’s in your 50’s and 60’s, while you still have the energy to get into shape, and have more time with the kids grown and work either behind you or less important than it was in your 30’s and 40’s.

So, get started.  Take a walk.  Throw in a 1/4 mile jog.  Build it up, slowly (and, to be safe, with Doctor’s approval).  Sign up for a class at your local rec center.  Find a friend and do it together.

Because it matters.  And…

Finding Opportunities, Because You Can

If you want to look for opportunities to do something simply because you can, start paying attention.  You’ll find them all around you.

Doing things just because you can is a fun way to live life.  I didn’t realize I was doing it until I answered that Facebook question and thought about it while swimming in “my” Lake Blue Ridge.

I encourage you to do the same.

There Will Come A Day When You Can’t

A close friend of ours was recently diagnosed with ALS.  She’s slipping pretty fast, and it’s a tough thing to watch.  A few months ago, we played our last pickleball game together.  Now, she can barely walk.   Another friend just came down with cancer.  A 60-year old friend has Alzheimer’s.  A neighbor had a serious stroke.

You never know what tomorrow will bring.

Don’t wait, at some point in your life, you won’t be able to.

Live a life of no regrets.

Don’t put off those things that you’d like to accomplish in your life.  There will come a day when you can no longer do them.  Life a life of no regrets.

Your Turn:  What’s an example of something you’ve done, simply because you could?  What advice would you give to others, to motivate them to do the things they’re capable of?  Let’s chat…

The post Because You Can appeared first on The Retirement Manifesto.