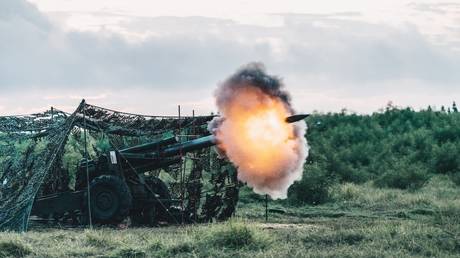 Washington must stop arms sales to Taipei, China’s embassy in the US says

China will respond with “decisive and firm measures” if Washington continues military cooperation with Taiwan, the spokesman for China's embassy in Washington, Liu Pengyu, said on Monday. The statement came after Politico reported that the Joe Biden administration is planning to ask lawmakers to approve an estimated $1.1 billion arms sale to the island.

American arms sales to Taiwan represent a “blatant violation” of the ‘one China’ policy and other diplomatic agreements reached between the US and China, Liu told the TASS news agency when asked about the reported weapons transfer. Such deals also “embolden separatists” and escalate tensions in the Taiwan Strait, the spokesman added.

“The US side needs to immediately stop arms sales to and military contact with Taiwan, stop creating factors that could lead to tensions in the Taiwan Strait, and follow through on the US government statement of not supporting ‘Taiwan independence,’” the diplomat stressed.

Liu went on to say that China would take “decisive and firm” action to defend its sovereignty and security interests.

According to sources cited by Politico, the arms package for Taiwan considered by the Biden administration is set to include 60 AGM-84L Harpoon Block II anti ship missiles for $355 million, 100 AIM-9X Block II Sidewinder air-to-air missiles for $85.6 million, as well as a surveillance radar contract extension worth some $655.4 million.

Tensions in the Taiwan Strait have been running high since early August, when US House Speaker Nancy Pelosi visited Taipei despite repeated warnings from Beijing. The controversial trip sent relations between the US and China into a tailspin and triggered multiple rounds of Chinese military drills in the area.

Beijing considers Taiwan a part of China, and views visits by high-ranking foreign officials as attacks on its sovereignty and violations of the ‘One China’ policy enshrined in the 1979 Taiwan Relations Act, as well as a number of official statements. The Taiwan Strait, which separates the self-governed island from mainland China, has been a source of military tension since 1949, when Chinese nationalists fled to the island after losing the Civil War to Communist forces.