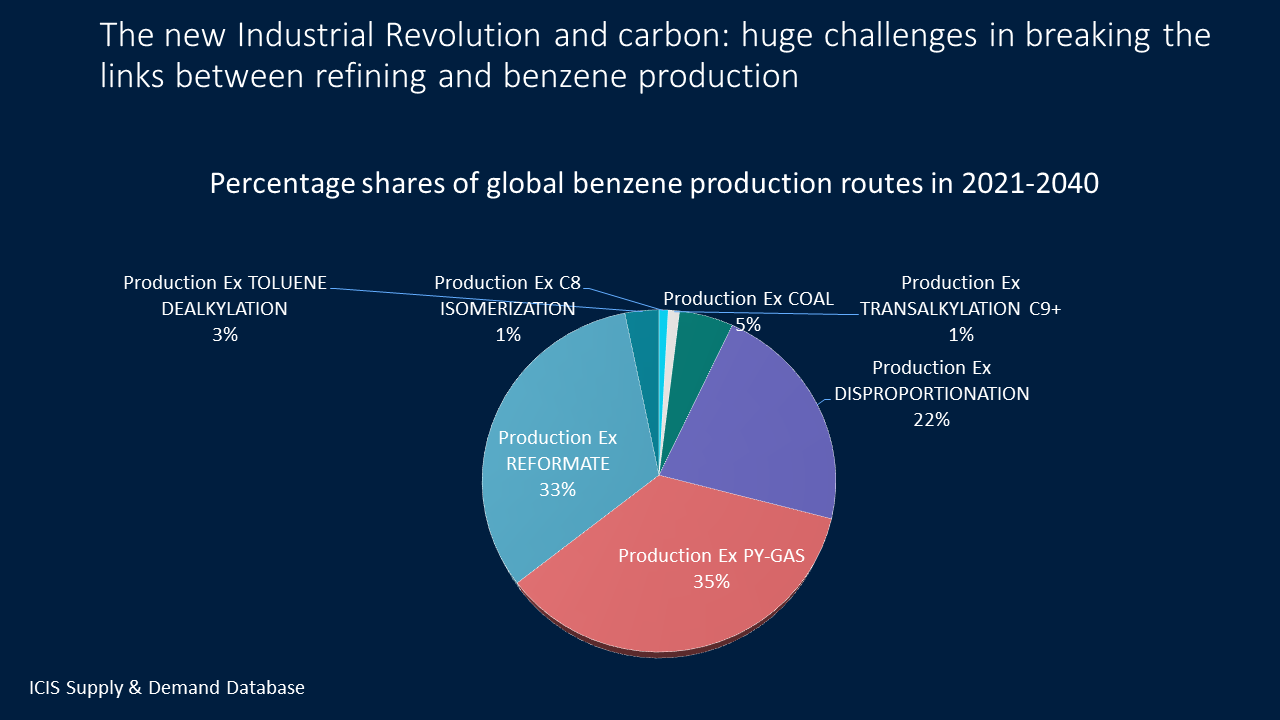 Benzene, the need for a new global Industrial Revolution and the big challenges that lie ahead

THE CHART BELOW shows that 60% of global benzene production in 2021-2040 is forecast to be made via technologies linked to refining units that also make gasoline components. 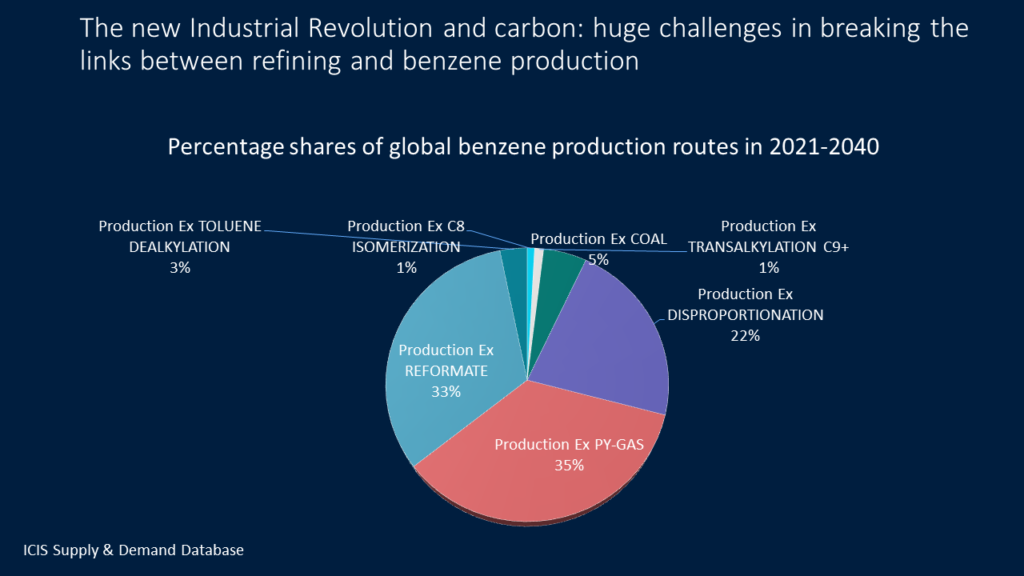 The 60% includes a 33% share for catalytic reformers that make toluene, mixed xylenes (MX) and benzene, referred to collectively as reformate.

In the bad old days, before we realised it was carcinogenic, there was strong demand for benzene as an octane booster for gasoline. Now benzene largely goes only into downstream petrochemicals with toluene – and to a lesser extent MX – used for boosting octane ratings.

Toluene and MX have alternative values into petrochemicals, most importantly MX into the polyester value chain,  but this is a story for another day.

Toluene that’s not required for gasoline blending or its own downstream petrochemicals derivatives is converted into more benzene and MX via the toluene disproportionation process detailed in the above pie chart – 22% of our estimate of total global production in 2021-2040.

The other “on-purpose” benzene production processes listed in the chart – for instance, toluene dealkylation – that make up the rest of the 60% are also linked to oil refining and gasoline demand.

As gasoline demand falls because of the electrification of transportation, we need to question how many reformers and toluene disproportionation (TDP) units etc. will continue to operate.

Even assuming sufficient heavy naphtha can be sourced from the refineries that stay open, might this be just a short term “sticking plaster” fix because of the inexorable rise of electric vehicles (at least in the West that is)?

Eventually, won’t so many refineries shut down that large-scale reformer closures are inevitable? Again at least in the West, but perhaps not elsewhere.

Then there is our estimate of 5% of global benzene production in 2021-2040 via coal as a feedstock (it is 10% in China). During COP26, strong headline commitments were made to wean economies off coal.

Oh, and we must not forget the remaining 35% of global benzene production we forecast will come from pyrolysis gasoline or pygas made in liquids steam crackers.

The liquids steam cracker business is under threat from the closure of refineries that supply them with LPG, light naphtha and heavier feedstocks. Again, at least in the rich world.

From waterproof jackets to medical scanners

You might already understand the linkages between refining and benzene production extremely well.

So what?  What about your external stakeholders – your shareholders, financiers, the regulators and the general public? I strongly suspect that they don’t fully understand.

Some of these stakeholders might even say, “Who cares about the loss of benzene production as it is just a dirty old petrochemical.”

Better communication of the challenges upstream must go hand in hand with more effectively getting the message across about the downstream role that benzene plays.

Everyone needs to understand that modern-day life would be impossible without benzene, as with the other petrochemicals.

Think of waterproof jackets made from nylon and polystyrene (PS) used for food packaging and medical packaging. Modern drug supply chains would not exist without plastic packaging.

On the theme of polymers again, medical scanners are made from composites of acrylonitrile butadiene styrene (ABS) and polycarbonate (PC). Both polymers need benzene in their upstream manufacturing processes.

Here is one of the many contradictions in the “bad old benzene” narrative: benzene is used to make expandable polystyrene (EPS) and polyurethane (PU) insulation foams that save energy and reduce carbon emissions.

I hope what I’ve discussed so far serves as a template for internal discussion as you try to better communicate to your wider community.

Now consider the chart below. 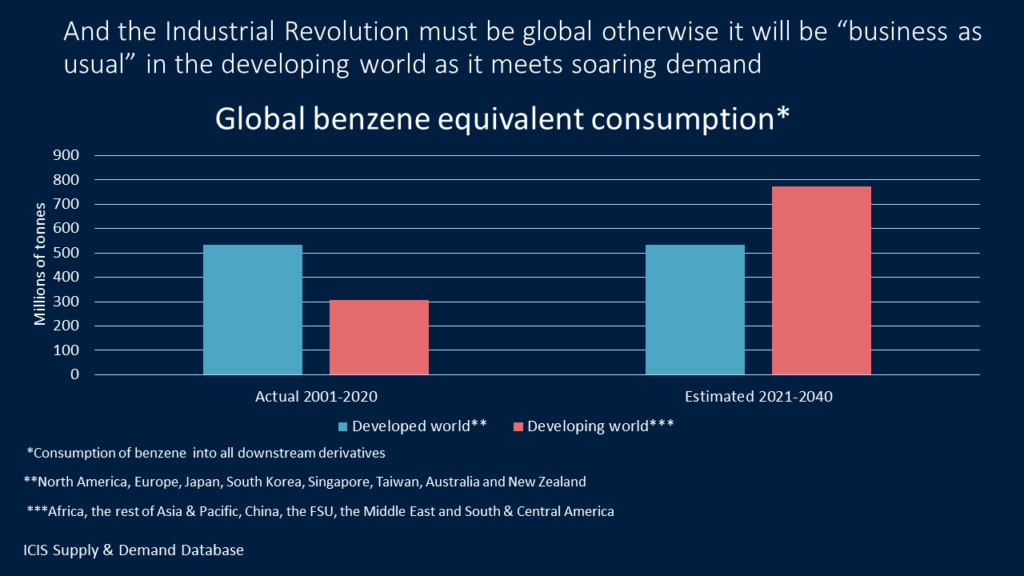 Whereas cumulative benzene demand in the developed world is forecast to remain flat in 2021-2040 compared with 2001-2020 at around 532m tonnes, consumption in the developing world is expected to skyrocket from 307m tonnes to 773m tonnes.

As I’ve discussed in other petrochemicals, this forecast reflects the expectation that millions more people in the developing world will escape extreme poverty or enter middle-income status.

This will mean that modern-day goods and services made from benzene will for the first time become affordable to these millions of additional people.

Supply simply must be adequate to meet this doubling in developing world benzene demand between 2021 and 2040, if we are to make more progress in improving the quality of lives in poorer countries.

Recycling some of the polymers made from benzene might help, but in these polymers  which are referred to as  styrenics (ABS, EPS and PS), recycling technologies are very much in their infancy.

All our industry’s stakeholders must be made to understand that an explosion of innovation is required if new and existing demand for benzene is to be met.

We must not underestimate the financing costs involved given the need to replace an industry so heavily tied into oil refining and gasoline consumption.

Lots of frogs will have to be kissed until enough of them turn into princes or princesses.

Numerous new technologies will need to be tested, many of which will fail the tests before we are able to adequately rebuild the benzene manufacturing chain.

A risk, as I’ve again discussed before, is that we end up in a divided world. The rich countries may press ahead with the energy and petrochemicals transition as poorer countries are forced to focus on their more immediate needs.

These needs include economic recovery from the pandemic and building basic energy infrastructure.

The great energy analyst and author, Daniel Yergin, in this article in The Atlantic magazine, made many of the same points that I have been making over the past 12 months.

In Nigeria and India, greater availability of propane cylinders – a cheap and easy way to distribute energy – has the potential to save millions of lives through less indoor burning of charcoal and kerosene for cooking.

“For India, it’s a question of ‘energy transitions’ – plural – which reflects the fact that its per capita income is only one-tenth that of the United States,” said Yergin.

He added that while Indian prime minister Narendra Modi’s government had announced very ambitious goals for wind, solar, and hydrogen – and had set a net-zero target for 2070 – It would continue to use hydrocarbons to achieve its immediate priorities.

The developing world needs a lot more energy for transportation. And, as we have seen, you can make plenty of benzene from refineries.

In the absence of enough money to electrify transportation – and in the absence of cheap-enough alternative technologies to make benzene – it is all too obvious what will happen: as the West decarbonises, it will be business as usual in the developing world.

The net result will be failure to keep the rise in global temperatures to around 1.5°C versus the pre-industrial era.

A new global Industrial Revolution in energy, transportation and petrochemicals is required.

We cannot afford a repeat of the last Industrial Revolution, which started in one country (Britain) and very slowly spread to poorer countries.

What are your solutions for ensuring a new global Industrial Revolution? Come on, this industry is full of smart people. Send your answers to john.richardson@icis.com.

The post Benzene, the need for a new global Industrial Revolution and the big challenges that lie ahead appeared first on Asian Chemical Connections.

Benzene, the need for a new global Industrial Revolution and the big challenges that lie ahead