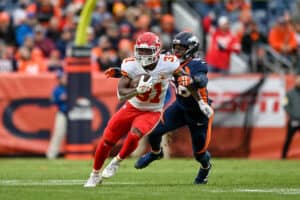 In this weekly NFL player props preview, we’ll highlight some bets you should consider for the upcoming week. Since player props typically aren’t posted until closer to game day, this early preview will look at some particularly favorable or unfavorable matchups that could become actionable.

This doesn’t mean we should automatically bet on these props, but these are some of the first players to check when lines are posted. Hopefully, oddsmakers haven’t identified the same trends as us, and we can find favorable value on these player props.

Also, be sure to check out the Sharp Angles Betting Podcast every Thursday for further discussion on these player props and more betting advice for the week ahead.

CONSIDER THE UNDER ON DEREK CARR’S PASSING YARDS PROP BET

The Las Vegas Raiders can be an explosive offense at times, but Derek Carr mostly takes his downfield shots when the defense is also being aggressive.

During the regular season, Carr ranked 12th in percentage of attempts at 10 or more yards downfield (33.2%). However, when the defense was in zone coverage and also did not blitz, that rate fell to (23.5%), ranked 41st out of 42 qualified quarterbacks, according to TruMedia.

Against the conservative Cincinnati Bengals defense, that second number is the more relevant statistic.

According to TruMedia, the Bengals drop into zone coverage without a blitz on 60% of opponent dropbacks, the league’s eighth-highest rate.

It also appears as though the Bengals coaching staff knows this defensive look neuters the Raiders passing attack. In their Week 11 matchup, Cincinnati used the zone/no blitz combo on 76% of Carr’s dropbacks 一 the highest rate Carr faced all year, and the 29th highest rate any defense used in a game all season.

In the first half of that game, Carr’s average depth of throw was a season-low 3.3 yards downfield, and he attempted just two passes with 10 or more air yards.

Cincinnati dominated the game, so Carr was forced to take some shots downfield in the second half, but completed just 4-of-7 throws 10 or more yards downfield and finished with 215 total passing yards.

Derek Carr’s passing yards prop is available at 259.5 on the FanDuel Sportsbook, which feels significantly higher than we should expect given Cincinnati’s defensive tendencies on the year and in their previous matchup.

CONSIDER THE UNDER ON DAK PRESCOTT’S PASSING YARDS PROP BET

The Dallas Cowboys are favored by three points against the San Francisco 49ers, and Dak Prescott should have success throwing the ball against the Niners’ secondary. However, the pace of this game could lead to depressed numbers for the Dallas offense.

San Francisco employs a slow-paced, run-heavy offense, and against a potent Cowboys offense, they’ll likely lean into that strategy. The 49ers run rate (48%) is the league’s fourth-highest and their seconds-per-play rate (30.4) also ranks as the fourth slowest.

Due to the 49ers’ preferred run formations 一 a fullback is used on 54% of carries 一 they run into a stacked box at a high rate. That can cause issues against certain defenses, but likely not against Dallas.

Dallas struggles to stop the run, even when loading the box. Excluding plays inside the 10-yard line, Dallas allows 4.3 yards per carry with seven or more defenders in the box, ranked 22nd.

Based on these trends, we should expect San Francisco to have success on the ground and slow down the pace of this game.

The 49ers’ ability to create slow-paced games has contributed to opposing quarterbacks hitting the under on their passing yards prop in 13 of 17 contests.

It’s also worth noting oddsmakers have consistently overshot Prescott’s yardage prop, with the under going 10-6 on the year, including 7-3 over his final 10 games.

Excluding Week 18 when his yardage prop dropped due to the possibility of not playing a full game, Prescott’s yardage prop has been consistently available north of 280 yards. Assuming it remains in that range, the under is the bet to place.

CONSIDER THE OVER ON DARREL WILLIAMS RUSHING YARDS PROP BET

The Kansas City Chiefs backfield is banged up, so monitor their injury news leading up to game time. However, the over on Darrel Williams rushing yards prop looks like a good bet if he’s cleared to play despite a toe injury suffered last week, which sounds likely.

Clyde Edwards-Helaire (shoulder injury) could also return this week. Edwards-Helaire’s status, however, sounds more uncertain, indicating he’ll be at less than full health even if he suits up.

Whoever lines up in the Chiefs’ backfield draws an incredible matchup against a struggling Pittsburgh Steelers defense.

According to TruMedia/PFF, the Steelers’ anemic run defense allows a league-worst 6.5 yards per attempt with six or fewer men in the box.

That’s a critical number against a Chiefs’ offense that spreads the defense out and forces light boxes at a high rate. 43.2% of the Chiefs rush attempts occur versus six or fewer men in the box, the league’s fourth-highest rate.

Expecting favorable run environments obviously bodes well for both running backs, but if Edwards-Helaire and Williams are both active, I lean towards favoring Williams based on the health status of each and the expected game script.

Since Edwards-Helaire hasn’t played in two weeks and his status remains murky, the Chiefs would likely prefer to limit his workload. As 12.5-point favorites against Pittsburgh, it’s likely the Chiefs will have the opportunity to pull Edwards-Helaire off the field at some point, increasing Williams’s workload down the stretch.

When both players are active, Darrel Williams’s rushing yards prop has typically been available around 25 yards. Without Edwards-Helaire it’s been set to an average of 55.5 yards. Depending on the scenario, the over on either of those numbers looks like the bet to place.