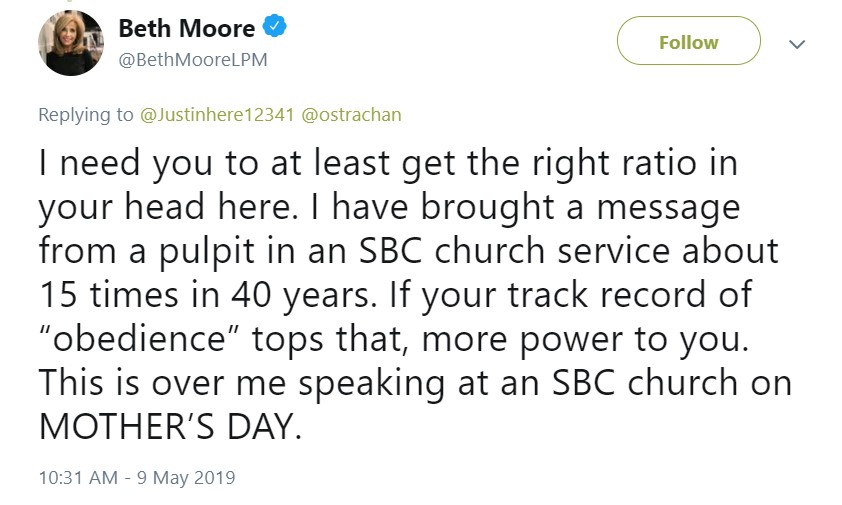 Beth Moore Defends Preaching on Mother’s Day: ‘I’m a Mother and the Pastors are Not’

Ex-Southern Baptist Beth Moore, who has been busy going “to and fro in the earth, and from walking up and down in it,” appeared on the Marty Duren podcast to have a conversation about her recent study on Galatians, along with the “current evangelical challenges.”

Chitchatting a bit about the study, and then about Trump and the Access Hollywood tapes and how they impacted her (more on that tomorrow), Moore shed light on the event that was the beginning of the end for her time in the SBC, explaining that she knew she was going to leave back in 2019, but that it took two years for her to make the final plunge.

It had to do with the brouhaha that erupted after Moore, while speaking to a friend nearly two years ago to the day, revealed that she too was preaching a sermon on Mother’s Day.

Moore explains what happened next:

It was like an atomic bomb dropped, and it was at the height, at the absolute height of the worst sexual abuse crisis in our entire SBC history. We’re right in the middle of it. And suddenly, the most important conversation – it was everywhere Marty. Everywhere you looked. Everyone was talking about it. I’m not just talking about hundreds of pastors.

Every now and then someone would tell me ‘it just a fringe thing.’

There was nothing fringe about it. Every kind of article. I was called everything under the sun. And what killed me, and I got to tell you – I can feel a lump in my throat even saying this to you – this was my world and these were my people.

They knew I was not after their pulpit. They knew that there has never been anything in me, never at any time, at any time, that had any ambition to be a senior pastor at a church, I’ve never been any kind of pastor at a church. I loved what I was called to do, and yet it became – my own home, my denomination that knew me, I had served their women, their women, they knew it. Ninety-eight percent of everything I had ever done out and about had been with women, and it was like ‘this is insane.’

And it was over Mother’s Day.

Moore, getting flustered by the theological hot flashes we’ve grown accustomed to hearing from her, makes the argument that it’s completely appropriate to preach on Mother’s Day. She claims the exemption on this one day because she is, after all, a mother, whereas the pastor preaching is not and has never been, thus giving her the necessary qualifications on account that “there is not a man on the earth standing at a pulpit who has ever been a mother.”


The post Beth Moore Defends Preaching on Mother’s Day: ‘I’m a Mother and the Pastors are Not’ appeared first on Protestia.

Beth Moore Defends Preaching on Mother’s Day: ‘I’m a Mother and the Pastors are Not’