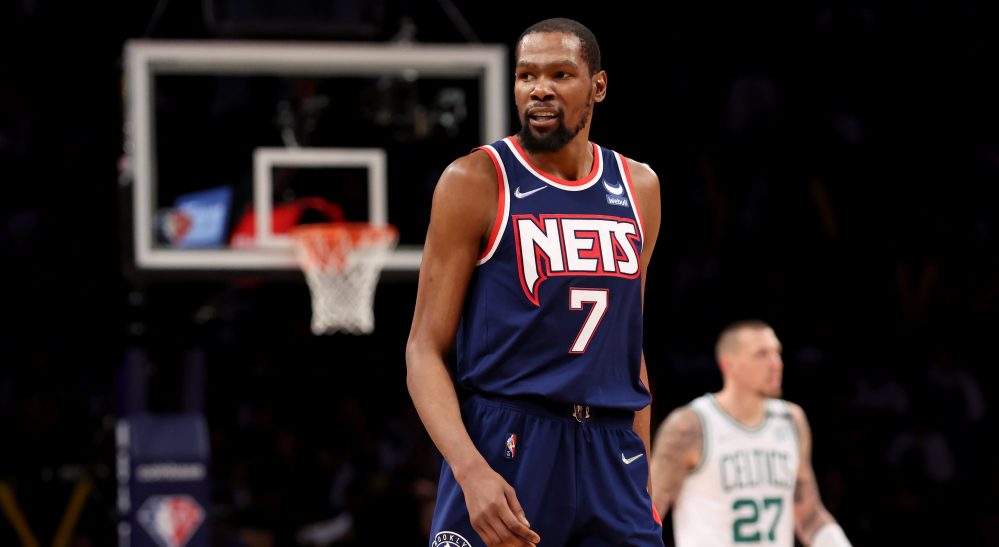 In the wake of the opening of free agency and reports that Kevin Durant wants out of Brooklyn, bettors are apparently hammering Los Angeles Lakers title odds.

At least three sportsbooks, and likely more, have seen dramatic movement on LA’s odds, which have gone from 15-1 to 13-1 in the last day at Tipico Sportsbook and 22-1 to 10-1 at Caesars. Since yesterday, LA has been the most bet on team by handle to win the 2022-23 NBA title at DraftKings, which now has the Lakers at +1200.

The movement obviously isn’t due to anything the Lakers have shown on the court in the past year. Rather it’s something people are expecting to happen.

Since yesterday, the Los Angeles Lakers (+1200) have been the most-bet team by handle to win next season's NBA Championship pic.twitter.com/st6H9MWBjW

Flurry of action on the Lakers @CaesarsSports began around 3 p.m., yesterday. Since then, 52% of $ bet on the NBA title has been on the Lakers, including a $10K bet at 22/1. The Lakers have attracted 3.5 times as much money as any other team during that stretch, per @TheMaxMeyer.

That 3 p.m. time noted above is just after news of Durant’s trade request broke. And ESPN’s Brian Windhorst reported that Kyrie Irving wants to force his way to the Lakers and league executives believe there’s a way LA can grab both Irving and Durant. Something like that would certainly move the needle.

Kyrie is focused on “forcing” his way to the Lakers, per @WindhorstESPN

League executives have floated the possibility that the Lakers have a potential package to trade for both KD and Kyrie if they plan on playing together pic.twitter.com/2SzqJ6FIKs

.@WindhorstESPN says the Lakers could make a play for both Kyrie Irving and Kevin Durant

"It has been floated to me. … That the Lakers would potentially have a package that you could trade for both of them." pic.twitter.com/vpp7uXc3Ku

I’m not ready to hammer LA’s title odds just yet because I’m having a hard time seeing the package for Irving that the Nets would find attractive. If Durant is included, that obviously changes my mind — even with Anthony Davis likely headed to Brooklyn — but that just feels a little farfetched at this point.

Gannett may earn revenue from Tipico for audience referrals to betting services. Tipico has no influence over nor are any such revenues in any way dependent on or linked to the newsrooms or news coverage. See Tipico.com for Terms and Conditions. 21+ only. Gambling problem? Call 1-800-GAMBLER (NJ), 1-800-522-4700 (CO).