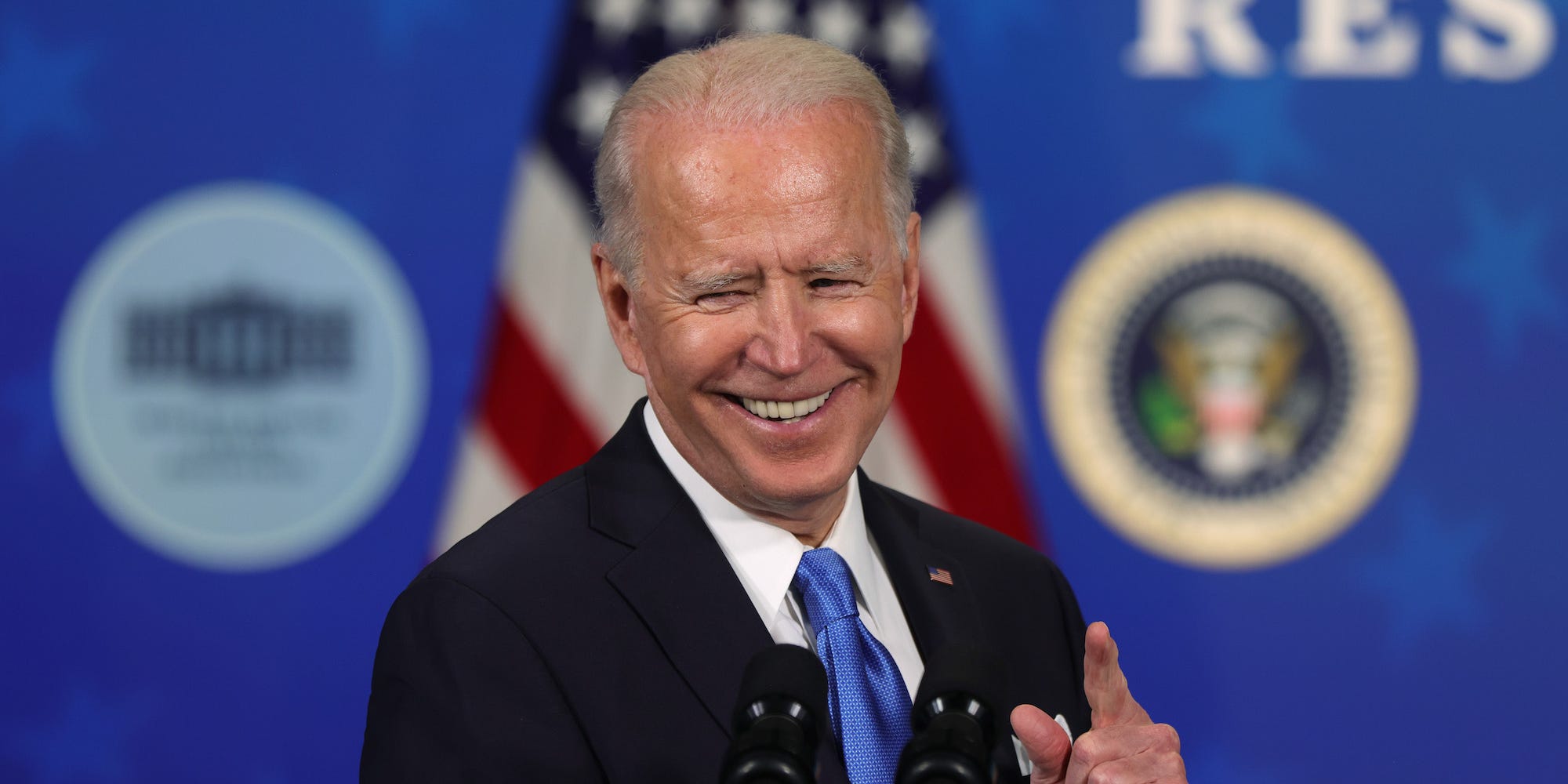 Biden inherited a mess, but his first 50 days as president have been a historic success [Silicon Alley Insider]

President Joe Biden was inaugurated two weeks after a violent insurrection at the Capitol and at the height of a pandemic that had already claimed over 400,000 American lives and dealt serious damage to the economy by the time he was sworn in.

But 50 days into his presidency, Biden already has a major legislative achievement under his belt. The House on Wednesday passed his $1.9 trillion COVID-19 stimulus package, which economists have predicted will provide a massive jolt to the economy. Biden signed the bill - one of the largest economic relief measures in US history - on Thursday.

The legislation includes $1,400 direct payments to eligible Americans, a boost to unemployment benefits, an expansion of the child tax credit, funding for vaccine distribution, and billions to help schools, colleges, and universities reopen.

Republicans overwhelmingly opposed the $1.9 trillion stimulus, painting it as too costly. But Democrats pushed it through the Senate via a tactic known as budget reconciliation, which protected the bill from a filibuster and only required a simple majority for it to pass.

Biden gets it done without Republican support in Congress, but with Americans behind him

Biden, who was in the Senate for decades before becoming vice president in the Obama administration and eventually president, campaigned on bringing "consensus" back to Washington. He's failing miserably on that front so far, as not a single Republican voted in favor of the stimulus. That said, he still got it done. And polling shows a strong majority of Americans support the rescue package.

A Pew Research Center poll released Tuesday found that 70% of US adults favor Biden's bill - including 41% of Republicans. A separate poll from Associated Press also found that 70% of Americans approve of the president's handling of the COVID-19 pandemic.

Whether congressional Republicans like it or not, history has been made and Americans are seemingly all for it.

Democrats are portraying the $1.9. trillion package as a historic anti-poverty measure.

Early analysis of the legislation found it primarily benefits middle and low-income households, and suggests it could drastically reduce poverty in the US. The non-partisan Urban Institute projected that the bill would reduce the annual poverty rate to 8.7% percent, as opposed to 13.7% without the legislation.

The ultimate impact of Biden's $1.9 trillion bill remains to be seen and the president has faced criticism from progressives for not fighting harder to keep a provision to raise the minimum wage to $15.

Regardless, the stimulus stands as among the most significant legislative accomplishments of any recent president in their first 100 days. It's akin to the roughly $800 billion economic relief package former President Barack Obama signed roughly a month into his tenure amid the Great Recession, which has been credited with staving off a second Great Depression.

Biden is off to a strong start, but still faces an array of complex challenges

Seeking to emulate the standard set by President Franklin D. Roosevelt during the Great Depression, Biden placed great emphasis on putting a significant dent in the COVID-19 crisis in his first 100 days. The stimulus is set to play a key role in this, and could be viewed as an inflection point in America's fight against the virus in the days, months, and years to come. With the pace of vaccination increasing across the US, Americans are beginning to see the light at the end of the tunnel almost a year after lockdowns first began.

Biden still faces a slew of convoluted challenges on the road ahead, and the pandemic is far from over. On the foreign policy front, there are significant roadblocks to Biden's plan to restore the 2015 Iran nuclear deal. He's also faced bipartisan criticism from congressional lawmakers over the first major military action of his presidency - airstrikes targeting Iran-backed militias in Syria in late February. Meanwhile, a surge in migrants at the border is complicating Biden's pledge to take a more humane approach to immigration than his predecessor.

In spite of this complex set of problems, recent polling shows a majority of Americans - roughly 53%, per FiveThirtyEight - approve of Biden's handling of the presidency so far. By almost every measure, Biden's first 50 days have been a historic success.

Biden inherited a mess, but his first 50 days as president have been a historic success [Silicon Alley Insider]