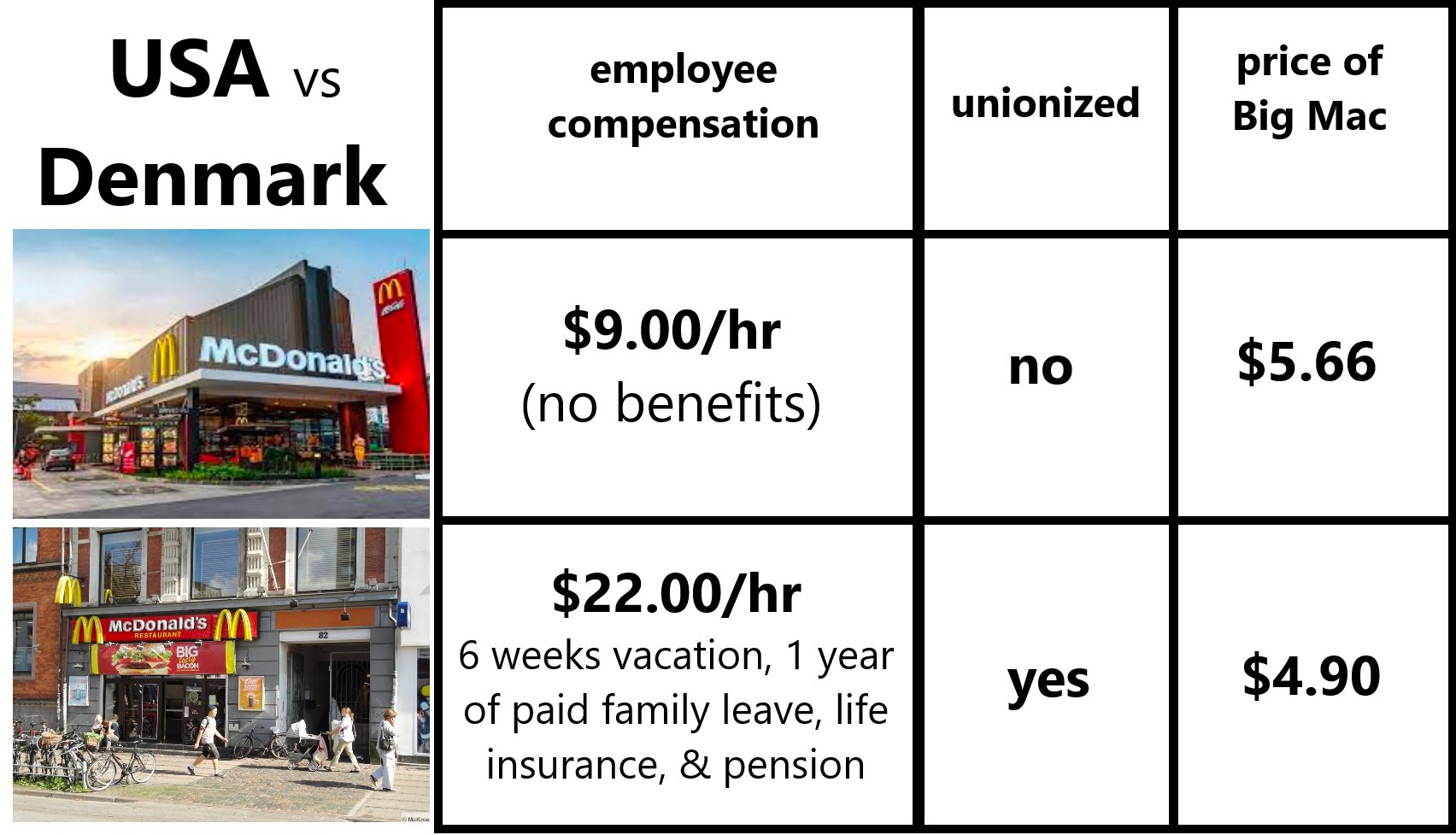 On November 23 2021, the Facebook page “Gritty 2020” shared an image which purported to contrast the costs of Big Macs in the United States and Denmark with McDonald’s workers’ wages and benefits:

In the above meme (“USA vs. Denmark”), two photos of McDonald’s locations appeared on the left side of the image. To the right was a table with fields labeled “employee compensation,” “unionized,” and “price of Big Mac.”

“Employee compensation” was said to be $9 an hour in the United States (no benefits), and $22 an hour in Denmark — with six weeks of vacation, a year of paid family leave, life insurance, and pension. The Denmark locations were described as unionized, and the United States’ was not.

In the third column, the price of one Big Mac was listed as $5.66 in the United States, versus $4.90 in Denmark (presumably in American currency). No sources for the information were provided, and context for the meme overall was not explained.

Prior to the meme’s appearance on Facebook, actor Bette Midler tweeted a screenshot of a May 2020 tweet by Seattle entrepreneur Dan Price that was similar to the meme. It may have been the source for some of the table’s figures:

However, the figures may also have originated with a November 22 2021 tweet with identical figures for both Big Macs and wages, as well as mentioning unions:

A McDonald’s worker in Denmark makes $22/hr, gets 6 weeks of annual vacation, a union, gets 1 year of paid family leave, gets life insurance & a pension.

In America, the same worker gets $9.00/hr with no benefits.#FightFor15 pic.twitter.com/zakAushJ7F

Context for the Meme: Wage Increases and the Proverbial $30 Big Mac

The meme appeared to rebut broader claims that if American workers were better compensated, the prices in well-known chains would skyrocket. That assertion was not limited to social media discourse; it also appeared in a January 28 2021 MarketWatch article (“What minimum-wage increases did to McDonald’s restaurants — and their employees”) as did a reference point for the $5.66 cost of a Big Mac in the United States:

President Joe Biden and Democratic lawmakers are making a push to raise the federal minimum wage to $15 an hour from the current $7.25. Some lawmakers and business owners who are against the idea say it would create harmful effects, including business closures, job loss and an acceleration of the shift toward automation.

[Two economists] found that the higher cost of labor that results from increasing minimum wages gets passed on to consumers in the form of more expensive Big Macs.

More specifically, they estimated that a 10% minimum-wage increase leads to a 1.4% increase in the price of a Big Mac. On average, Big Macs cost $5.66 in the U.S., according to the Economist’s Big Mac Index.

As we indicated in previous fact checks, the federal minimum wage in the United States is $7.25 an hour; the meme didn’t specify from where the $9 figure for McDonald’s workers was obtained. A Google search for “average McDonald’s wage” on November 23 2021 provided a workstream.us blog post from November 17 2021 as the first result:

A typical McDonald’s worker earns around US$8 per hour, which, truthfully speaking, is hardly enough to support an individual, let alone a family. They work five days a week, which is an average of 25-30 hours per week. In fact, we discovered that McDonald’s actually limits the number of hours an employee can work to only 40 hours per week.

For the longest time, McDonald’s starting salary was US$6.25 per hour. Fortunately, it went up when the minimum wage was increased, which is reasonable considering the laborious work they have to go through during their shifts. Moreover, they rarely get to choose the position they will be covering for that day as it is usually up to the management to decide on the task allocation.

However, a July 2021 RD.com article, “This Is What McDonald’s Workers Really Get Paid,” might have been the source for the meme’s maker. It landed upon $9 as an average, describing the manner in which compensation ranged for different roles:

Determining an average was difficult, but the meme selected an average higher than the $8 often cited. As for the starting McDonald’s wage in Denmark, a significant amount of discussion (in the form of Quora answers, tweets, and Reddit posts) made it difficult to initially track down. But a 2014 Business Insider (now “Insider”) piece reported figures in line with a $22 hourly wage in 2021:

But in Denmark, McDonald’s employees make twice what they do in the US, and the Big Mac costs just 35 cents more, William Finnegan writes in the New Yorker.

McDonald’s workers in the US make a median hourly wage of $9.15, according a New York Times report citing PayScale, a firm that tracks compensation data. McDonald’s does not provide data on its wages.

“In Denmark, McDonald’s workers over the age of eighteen earn more than $20 an hour — they are also unionized — and the price of a Big Mac is only thirty-five cents more than it is in the United States,” Finnegan writes.

That excerpt acknowledged that McDonald’s workers in Denmark were unionized.

In September 2021, a Jacobin article, “McDonald’s Workers in Denmark Won Good Pay and Benefits Through Striking,” delved into McDonald’s history in the country as it related to unions. Its subheading read:

In Denmark, McDonald’s workers receive $22 per hour and 6 weeks of vacation. But it’s not because Danish capitalists are more enlightened — it’s because, when McDonald’s entered the country in the 1980s, unions launched mass strikes and boycotts.

The article described “sympathy strikes” organized across industries in Denmark in the 1980s:

In addition to wreaking havoc on the company’s supply chains, the unions engaged in picketing and leaflet campaigns in front of McDonald’s locations, urging consumers to boycott the company.

Once the sympathy strikes got going, McDonald’s folded pretty quickly and decided to start following the hotel and restaurant agreement in 1989.

This is why McDonalds workers in Denmark are paid $22 per hour.

We wanted to check whether Danish McDonald’s workers are unionized and really make $45,000 a year.

We found the union contract so that part is simple. As for the $45,000 a year, there are issues but if the number isn’t spot on, it’s pretty close.

As such, Danish McDonald’s workers are unionized, and their American counterparts are not.

The Cost of a Big Mac in Denmark vs. the United States

Some previous memes made to promote better wages for fast food workers and McDonald’s employees have contained claims that the cost of a Big Mac was marginally higher in Denmark, arguing that the under $1 difference was worth paying a living wage — Price’s May 2020 tweet, embedded above, said “Big Macs cost just 27 cents more” in Denmark than in the United States.

That caveat disappeared from the November 2021 tweets and memes, with a fundamental shift indicating that Big Macs in Denmark had since become less expensive than American Big Macs. But as was often the case, a source for the claim was not always cited.

In our research, we often encountered references to the Economist‘s “Big Mac Index,” which the outlet said was “invented by The Economist in 1986 as a lighthearted guide to whether currencies are at their ‘correct’ level.” Given that the memes and tweets’ cited prices fluctuated between iterations, we sought to determine whether Danish Big Macs had dropped in price to be less expensive than American ones, not slightly more expensive (as indicated as recently as May 2020).

Google converted Danish kroner to United States dollars at an exchange rate of $0.15 to DKr1; DRr30 worked out to $4.54. In the United States, a Big Mac was $1.11 more expensive, or 24.4 percent costlier than a Big Mac in Denmark.

Further, the meme overstated the cost of a Big Mac in Denmark — the cost we calculated was even lower than the $4.90 estimated in the meme.

Discourse contrasting the cost of Big Macs in Denmark versus the United States stretched back to at least 2014, re-emerging in November 2021 with memes and tweets. Although iterations as recent as May 2020 referenced Danish Big Macs costing “27 cents more,” a November 2021 meme asserted that the cost of a Big Mac in Denmark was less expensive than its American counterpart despite an average hourly wage of $9 at the time, which flies in the face of conventional wisdom in the United States.

The meme’s union claim was not a figure, but it was accurate — Danish McDonald’s workers were indeed unionized. With respect to average wages, $9 was on the high side for the United States (with $8 also cited as an average for McDonald’s employees). Fact checks dating back to 2014 discussions indicated that Danish McDonald’s workers earned more than $20 then, and the $22 figure was widely reported in 2021 as the standard hourly wage for McDonald’s employees in Denmark. Overall, the figures came into sharper contrast when we attempted to validate them — primarily the cost of a Big Mac, which appeared to be even lower than $4.90 in Denmark in November 2021.

The post Big Macs in Denmark Versus Big Macs in the USA appeared first on Truth or Fiction?.