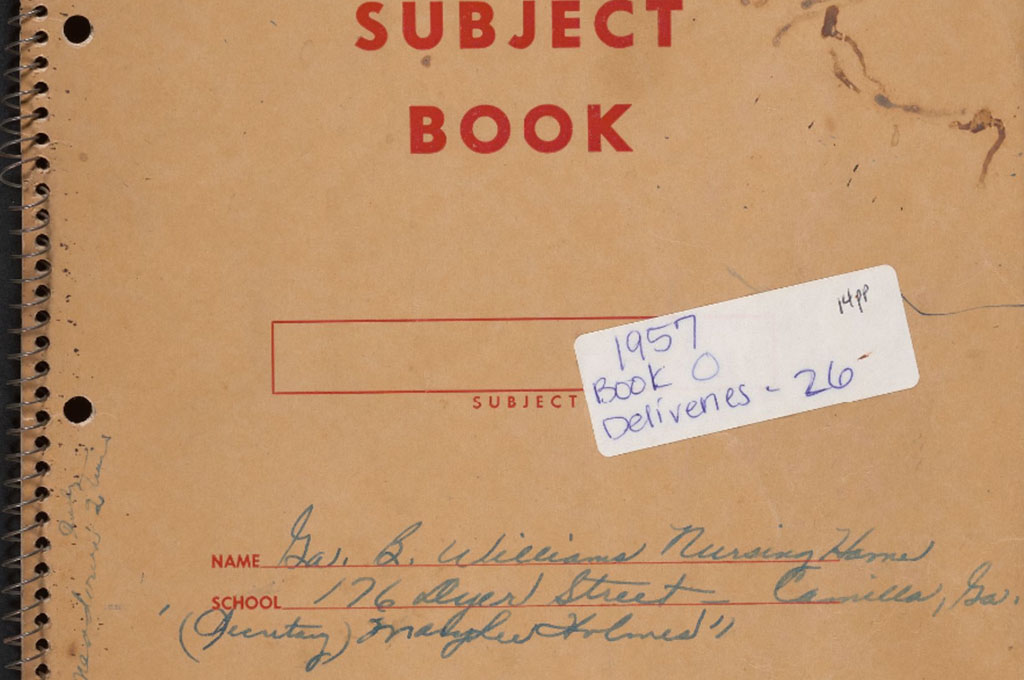 This nursing home, located at the home of state-certified midwife Mrs. Beatrice (“Miss Bea”) Borders (1892–1971), was the first and only professional birthing center in the rural South where African American women were allowed by local doctors to receive midwife delivery for their newborns during segregation, Jim Crow depression, and medical deprivation in the 20th century.

“Miss Bea” and her assistants oversaw over 6,000 births and provided a safe place for African American mothers who had nowhere else to go.

Depending on the volume, some entries include the mother’s name, the date she entered the facility, the time of the birth, the baby’s weight, the baby’s gender, and whether there were any complications such as stillbirths. Some entries include additional genealogical information such as occupation, age, and address, birthplace, number of children in the family, and the name of the father.

“The digitization and cataloging of the records from this Black-owned/operated business present an opportunity for students and researchers to learn about this historically significant place and the people who entered its doors.

It is our hope that this project will bring awareness to Mrs. Borders and will build support for the physical preservation of where she did her work.

The Georgia B. Williams Nursing Home in Camilla, Georgia survives as a very rare example of a professional birthing center run by Mrs. Borders, a state-certified midwife.  Increased access to the business records and related documents generated between 1941 and 1971 will assist hundreds of people researching their genealogy and roots in Mitchell County, Georgia.”

About the Georgia B. Williams Nursing Home

Listed on the National Register of Historic Places in 2011 and named one of America’s 11 Most Endangered Historic Places by the National Trust for Historic Preservation in 2021, the Georgia B. Williams Nursing Home in Camilla, Georgia was the private residence and nursing center for a third-generation African American midwife Beatrice Borders (1892-1971), in Camilla, Georgia who provided safe, patient-focused health care for expectant African American mothers during segregation in the 20th century. Learn more at beasbabies.org.

About the Digital Library of Georgia

Based at the University of Georgia Libraries, the Digital Library of Georgia is a GALILEO initiative that collaborates with Georgia’s libraries, archives, museums, and other institutions of education and culture to provide access to key information resources on Georgia history, culture, and life. This primary mission is accomplished by developing, maintaining, and preserving digital collections and online digital library resources. DLG also serves as Georgia’s service hub for the Digital Public Library of America and as the home of the Georgia Newspaper Project, the state’s historic newspaper microfilming project.

Visit the DLG at dlg.usg.edu.

Selected images from the collection: