I Love Selling. Here’s Why.

It’s what I did as a kid. I was a salesman since I was five years old.

My neighbors on Teaberry Drive were amazing people. They were retired. They had no kids. They lived in a ranch right next to our townhouse, and had beautiful flowers in the yard. I remember going up to their yard, and ripping a few of those flowers out of the ground, putting a few of them together in a bunch, and cleaning them off.

I walked up to the door, rang the doorbell, and I said: “Would you like to buy some of these flowers?”

My neighbors offered to buy her own flowers back from me for 5 cents (by the way, those 5 cents felt like all the money in the world to me back then). I was so pumped.

For the rest of the summer, I’d be running around the neighborhood ripping flowers out of people’s yards and trying to sell them back to the owners.

Later, I sold baseball cards at trade shows every weekend. I would watch people’s eyes as they walked by, and tried to figure out how I could stand out from my competition. I was making thousands of dollars every weekend at 13 – 14 years old.

Even today, as the CEO of a company that does $150 million+ / year, I hit up garage sales on the weekends when I have time to buy random stuff and flip them on eBay.

I do it because I love it.

Knowing how to sell is the bedrock of all business.

Here’s why I love it, and some mindset shifts to help you sell more effectively over the long term:

Sales is fun when you sell something you believe in

Selling something you don’t believe in is.

When you’re selling something you don’t believe in, it gets a lot harder. I’ve been in many meetings where I can tell the person on the other end isn’t bought into what they’re selling — and it shows. Those people hedge so much in their own pitch without even knowing it, and it kills their chances of actually winning customers.

I spent a long time learning about wine before talking about wine or starting WineLibraryTV. I needed to believe in what we were doing.

At Wine Library, it was that we made great wine for lower cost than everyone else. We were giving people a better deal. It’s part of what helped me aggressively sell our products through Google AdWords back when it was underpriced.

I did a live stream on my birthday where I did a QVC-style call-in show answering people’s questions, and selling Empathy Wines packages. I really believe in this because we’re producing $40 wine for $20 — and making great wine more accessible to people without big budgets.

It makes it easier (and more fun) to sell when you believe in what you’re doing.

The best sales strategy is branding

Some people think I’m against selling because I talk about giving all content away for free – but the truth is, building brand is the best sales strategy.

That’s why even though I do sell people “directly” sometimes, I try as much as possible to avoid it.

I’m building a relationship for the long term. Everyone can have their 15 minutes of fame, or better yet their 15K instagram followers and their one great sale. Not many people can build a brand and a relationship with their audience for years to come.

Whether you’re a small business or a massive corporation, you need to start thinking about business as a long term relationship, not a single transaction.

But here’s the funny thing about brand: If you actually build a strong brand, you outsell any salesman any day of the week.

Ask, but have zero expectations

Selling isn’t about being pushy or turning a “no” into a “yes” – it’s about asking, but having zero  expectations about how the results will play out.

Even though I’m pushing wine, sneakers, and books, I have no interest in people buying if they’re not interested in those things. 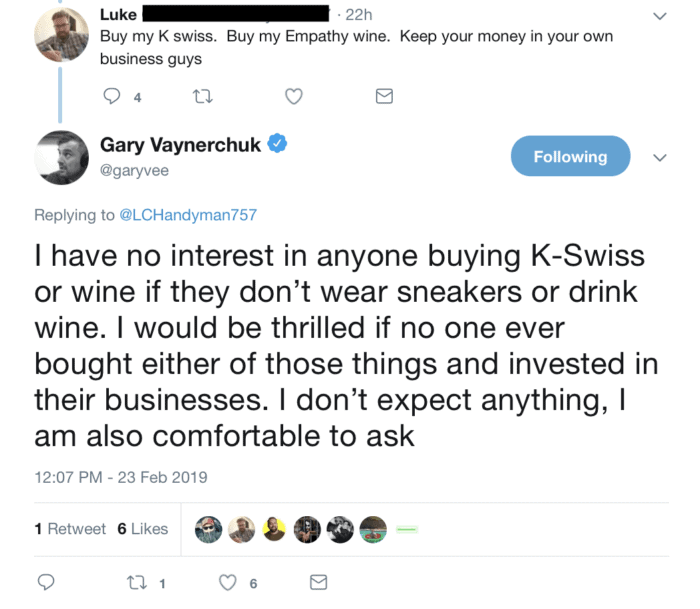 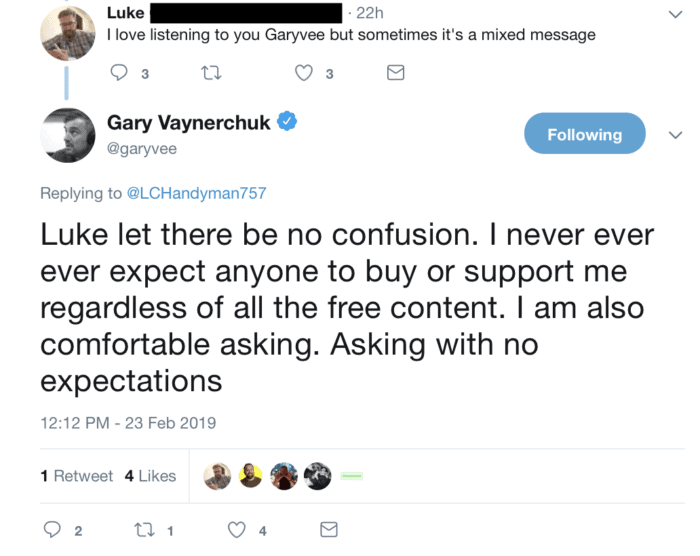 I’m comfortable with asking but I don’t expect anything. It’s an important part of selling.

One of the most fascinating aspects of all this that most people don’t understand, is that you can’t sell the unsellable. When I try to understand the ecosystem and analyze why people aren’t winning, it’s because they have built enormous mental barriers around partnering with the “right” brand, or selling to a specific CEO.

The truth is, the real world doesn’t work like that, and you can’t be romantic about who gives you the opportunity. There are a million and one reasons why a certain company or executive won’t work with you. Even if your product is 10X better than the competition.

It could be that they’re under a long term contract with someone else.

It could be that they have a very close relationship with a vendor, or that the company’s investors have an agenda for what they want to accomplish.

Of course I want VaynerMedia to work with every Fortune 100 brand, but because of the market dynamics, and complicated politics that are in play, it’s easier said than done. You have to be practical when it comes to sales, and you have to be willing to take the opportunities right in front of you.

I come into every business meeting feeling massively optimistic that the person on the other end is going to buy from me. And when I realize that they’re not going to, I immediately “check out.” I’m not romantic about it.

I talk about giving away all my content for free, but don’t be confused — I’m a salesman at heart. It’s actually the reason I try to encourage businesses to start focusing on brand as soon as possible.

It’s the best way to sell over the long term.

Would mean a lot to me if you could share this article on Twitter if you found it valuable!

I Love Selling. Here’s Why.