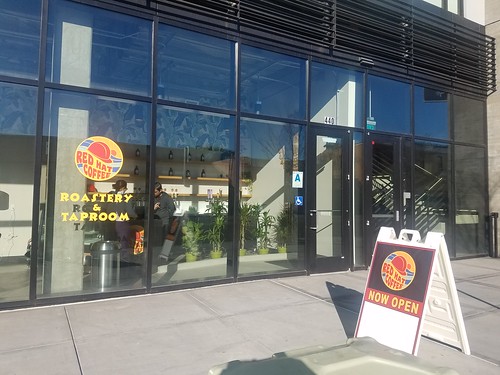 Bert and I were up pretty early to head over here... 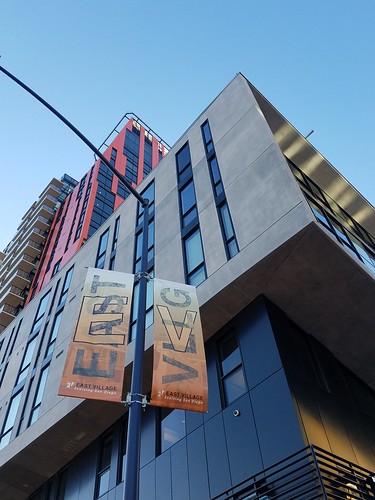 
You may have seen this distinctive building with a funky side tower while on the 5 freeway...The two taller buildings with the red and yellow strips are the Pinnacle apartment towers. This newer building is the Shift residential tower. It is 21 stories high and uses the same paint color as the San Francisco Golden Gate Bridge. This is the building that Red Hat is located... 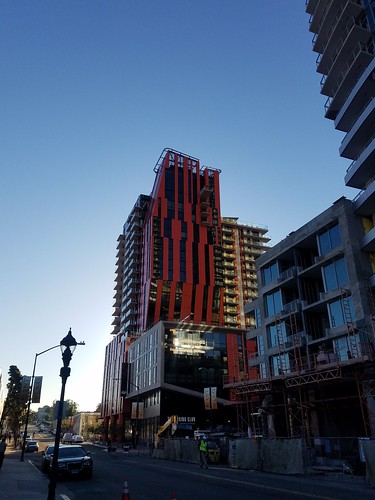 It's on the bottom floor and is across the street from God's Extended Hat, a social service organization that serves the homeless.

We happened to be the first customers of their first official day of opening. We met the owner Ryan and his wife Karenza (I hope I'm spelling that correctly) and their roaster, Luis (who grew up down south like we did). Nice folks all of them and very humble.

They serve only cold brew here some with a few differences such as Nitro, cinnamon and piloncillo (in their cafe de olla). They also serve kombucha, which TC loves but which I am not a fan of. They also have a variety of lattes which we will have to try for a future visit. 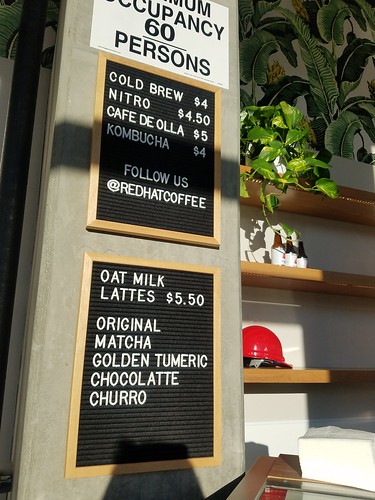 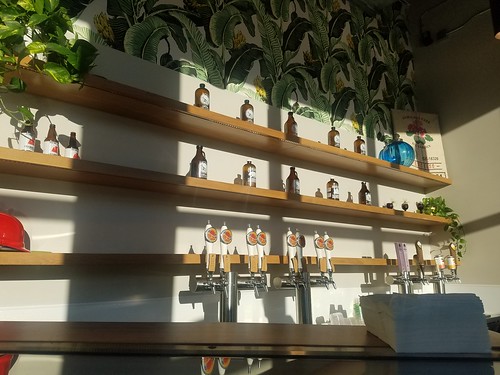 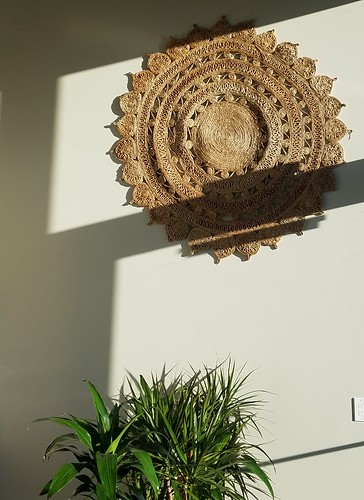 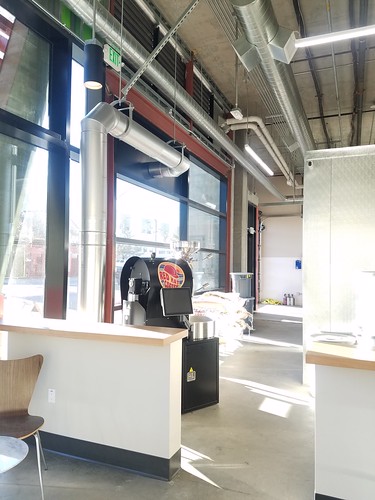 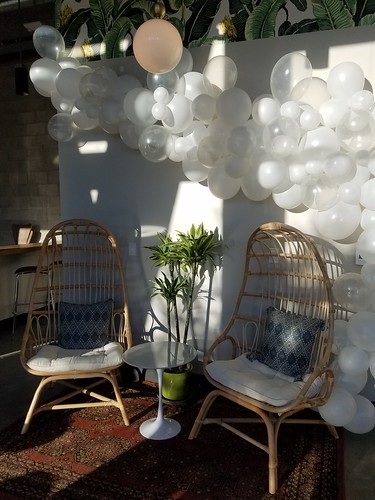 The space is long and kind of stark. There are a few seating areas and plenty of light from their floor to ceiling windows.

My cold brew with Nitro in the front and Bert's Chocolatte in the back and in the second photo below. Both drinks were excellent and needed nothing extra to sully them. Seriously, these were so smooth. Bert's chocolatte had oat milk which he's been obsessed with lately. It's another milk sub that he prefers since sometimes almond milk can taste oily. 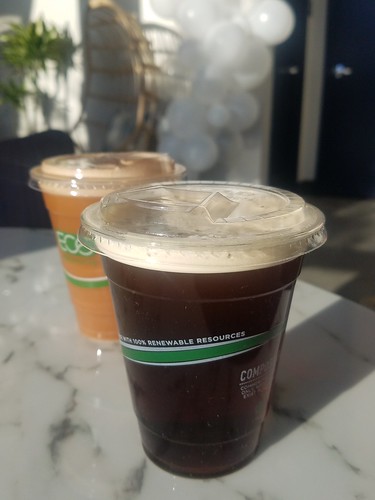 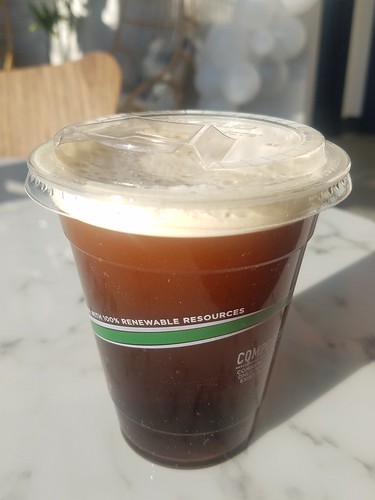 Luis and Ryan even gave us a mini tour. Luis was telling me that their roaster is all computer operated meaning no knobs or anything to manipulate. Very high tech indeed. They roast their own beans here and do a lot of distribution. I knew I'd seen their products before, including at Target. I may need to pick up a bottle of their cold brew next time I'm at Target. 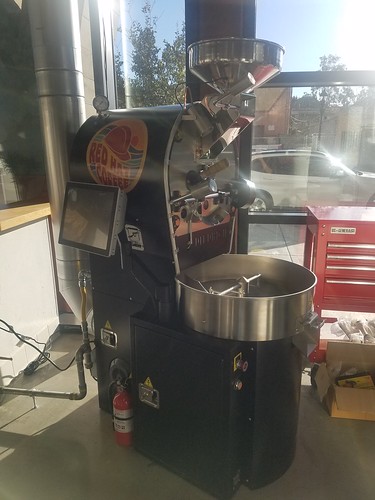 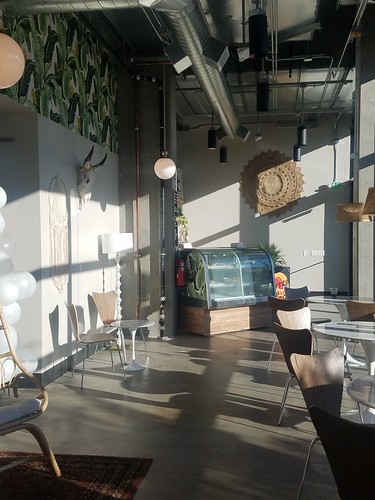 It really nice chatting with them and learning more about their business. I hope they do well here. 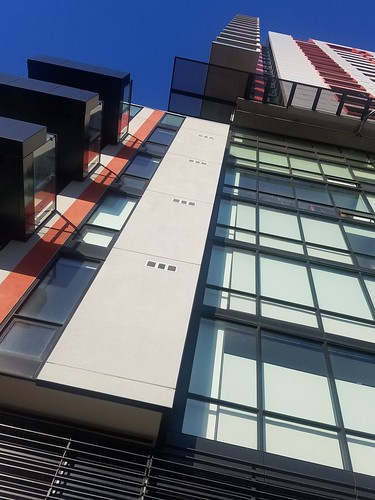 Hopefully this apartment complex, Shift, will be their built in audience as well as the other denizens of the nearby high rises in this emerging neighborhood.

Articles:
Coffee smooth enough to drink black" SD Reader, May 13, 2015
Shifting gears in East Village" San Diego Magazine, March 2018 - This article is more of a feature of the high end development that would eventually house Red Hat (before they became a brick and mortar)

Bert and I walked around the block and saw a lot of cool art (that will be a separate post). Genteel Coffee is right around the corner from here, as well as Seahorse. We were on our way to meet up with a childhood friend of mine whom I hadn't seen since high school graduation (we're talking more than 30 years ago)...