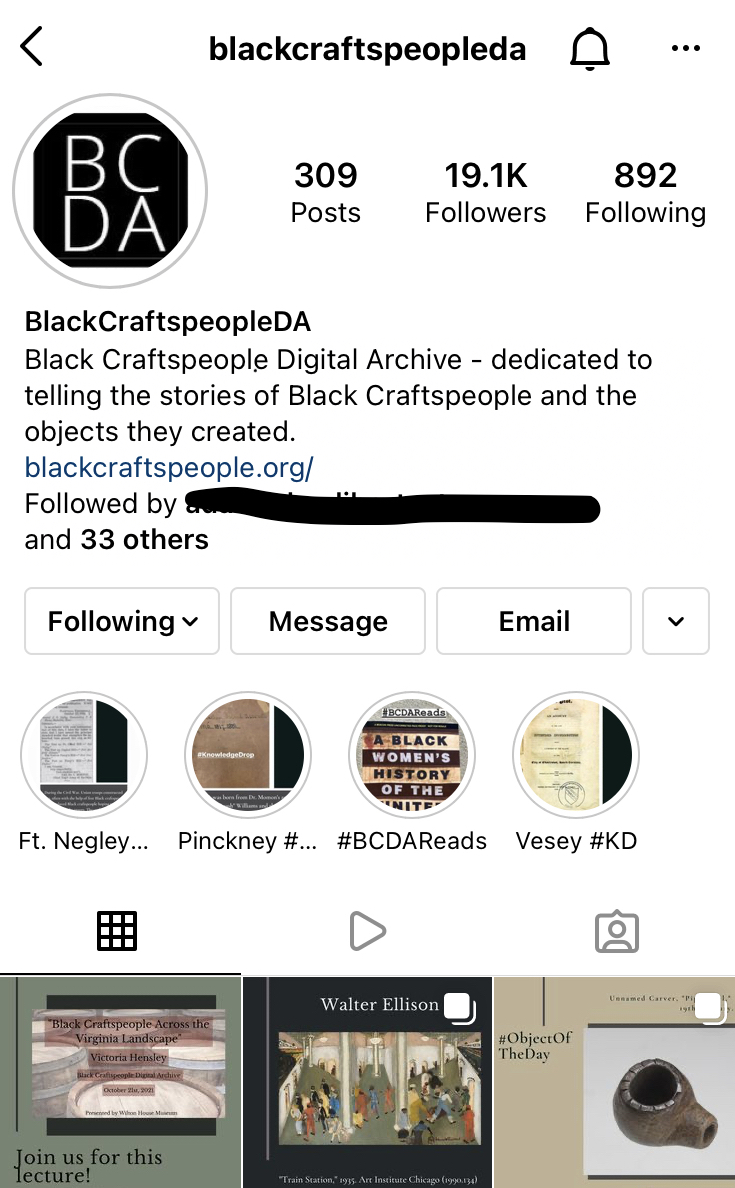 Editors’ Note: This is the first of two Q&A posts about the Black Craftspeople Digital Archive.

History@Work: Tell us a little bit about the Black Craftspeople Digital Archive (BCDA). What inspired you? How and when did you get started? Who is involved in the project?

Tiffany Momon: What inspired me to create the BCDA was my involvement in the decorative arts. During the summer of 2018, I participated in a fellowship, and my project that summer was to uncover the story of the construction of the c. 1750 Pinckney Mansion in Charleston, South Carolina by examining the experiences of the mansion’s enslaved—and later freed—Black master carpenter and joiner John “Quash” Williams.

While researching Williams’s amazing story, I quickly uncovered the stories of eight other enslaved men who worked on the project. What the research revealed was that these men were moving throughout the Lowcountry and working at various sites. I quickly became interested in mapping their locations and pondering their movements, and they became the first test cases for the project. From there, I realized that if I could do this [map their movement and work patterns] for them, then I could do this for others and it just snowballed. At that point, I invited Dr. Torren Gatson to join me and we’ve been hard at work ever since. 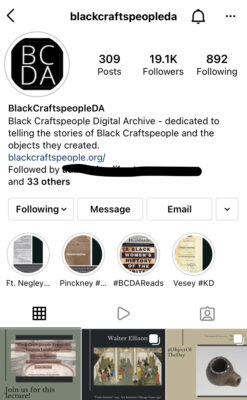 We’ve also been lucky to have a few students involved. First, Victoria Hensley, a Ph.D. student at the Center for Historic Preservation at Middle Tennessee State University, works as our research director and social media manager. Hensley is also the BCDA research lead for Tennessee and Virginia. Sarah Grahl also worked on the project and she has since graduated from the University of North Carolina Greensboro. Grahl helped in the beginning stages of the project and completed the South Carolina and North Carolina research. Additionally, Maya Brooks was a student from the University of North Carolina Greensboro who has since graduated, and she worked as our website designer and graphic designer. We hope to engage more students in this work in the coming months.

Victoria Hensley: I got involved through the Center for Historic Preservation (where Dr. Momon and Dr. Gatson also had graduate assistantships) as a research associate for the first phase of the project. In August 2020, I took on a new role as research and programs manager as a doctoral residency and led the Tennessee phase. I also run social media, writing and designing content.

History@Work: What are the different components of BCDA? My understanding is that you started with a social media presence and then began to build a map of Black craftspeople from Charleston, South Carolina. What have you learned from those two components of the project?

Victoria Hensley: Yes, the social media presence began almost one year before the official launch of the website, archive, and map. Using social media allowed us to gain a following and get people talking about the project. Moreover, in the wake of racial violence during the summer of 2020, especially around the protests of the murders of George Floyd and Breonna Taylor, we saw an uptick in followers of the project. As more academics, curators, and educators wanted to diversify their own collections and materials, interest in the project grew. Since we did not have a website yet, we used our Instagram account to honor and celebrate the lives of Black craftspeople, as well as to begin telling stories of how to do this work.

In June 2020, BCDA was featured in an Instagram post by Michael Diaz-Griffith called “Eight Black Historians to Follow Now,” and that definitely generated a lot of buzz. When we launched two months later, more people knew about the project than I would have expected when I took over the social media account.

Tiffany Momon: Adding to Victoria’s answer, I would like to say that what I have learned from those two components of the project is just the sheer power of social media. I am not a big social media person; I probably only post five times a year. But what I’ve enjoyed most about the BCDA Instagram community are the ways they encourage the project, ask questions, and just overall engage with the project. What I learned from the first launch of South Carolina was how to create a website using both WordPress and Omeka. I also learned a bit about the inner workings of ArcGIS. I want to stress that we were learning how to create the website at the same time that we were researching and collecting the names of Black craftspeople.

History@Work: What types of primary sources have you been gathering or linking to your site?

Victoria Hensley: For Tennessee specifically, we turned to U.S. Federal Census data for three of the major cities in the state: Memphis, Nashville, and Chattanooga. This not only allowed us to see just how many people identified with certain trades as their occupations after emancipation, but it also allowed us to extend the temporal scope of the archive beyond eighteenth-century South Carolina and into post-emancipation life in Tennessee. Adding more states and examining different time periods allowed us to see changes in the language used to describe craft and trade work, change over time, and changes in what types of craft and trade work were most essential in different states at different times.

Tiffany Momon: We started out using advertisements seeking the return of self-emancipated craftspeople people, as well as advertisements selling enslaved craftspeople. We combed a variety of newspapers to find these advertisements, paying close attention to the words used, the ways labor was described, physical descriptions, locations, family members, and items they might have taken with them when they self-emancipated. For Tennessee, we used the same advertisements, but we turned to the 1870 US Census and literally read it line by line looking for black craftspeople. With the coming launches, we will use the same sources but we are also turning towards private papers, wills, estate records, etc.

History@Work: Why don’t we talk more about Black people and craft when we talk about early American material culture and decorative arts? What barriers prevent us from highlighting these stories?

Victoria Hensley: Barriers? Racism and white supremacy that are so embedded in all of these institutions.

Tiffany Momon: I believe a lot of it has, of course, to do with racism. Additionally, many place the burden of proof on enslaved craftspeople and ask questions like why they did not sign the objects they made? Or, why did enslavers not write down that a person they held in bondage and treated as property made a specific object? We have even received comments about this since the start of the project and accusations that our project is a slippery slope in terms of attributing objects to creators. It is not a slippery slope at all. The truth of the matter is that museums and historic sites severely undercount the presence of enslaved craftspeople in the objects that we all love.

History@Work: How did the Black Lives Matter and anti-racist movements of 2020 further galvanize material culture scholars who work on and interpret early American history through objects to share these stories more widely?

Victoria Hensley: As mentioned when discussing how social media played a role in the project, we definitely saw an uptick in interest in the project in the past year and a half. More and more museums, historic sites, and other organizations across the country such as the Historic Charleston Foundation, Historic Deerfield, Saint Louis Art Museum, and the Decorative Arts Trust among others were asking both Dr. Momon and Dr. Gatson to speak on the project and how these institutions could better honor and spotlight Black craftspeople. Will this continue? Hopefully so. One of the biggest goals of BCDA is to show how doing this work is not hard—it just takes time and effort. Hopefully, more scholars and curators will be willing to do the work and continue doing the work.

Tiffany Momon: Recent anti-racist movements spurred a lot of material culture scholars to examine themselves and their institutions. There was a noticeable uptick in the summer of 2020 as more museums began to share these stories. Additionally, there was a string of conferences and lectures dedicated to Black craftspeople and makers and Black history in general. As my colleague Victoria stated, I hope this continues because it should have been happening all along.

~Tiffany Momon is a public historian and assistant professor at Sewanee: The University of the South and founder and co-director of the Black Craftspeople Digital Archive. Momon’s research focuses on  African American placemaking throughout the southeast, documenting cemeteries, churches, schools, and lodges.

~Torren Gatson is an assistant professor in the department of history at the University of North Carolina at Greensboro and co-director of the Black Craftspeople Digital Archive. Gatson is a scholar of nineteenth and twentieth-century U.S. southern history, with an emphasis on the African American built environment.

~Victoria Hensley is a Ph.D. candidate in Middle Tennessee State University’s public history program and a graduate assistant at the MTSU Center for Historic Preservation. Hensley serves as research director and social media manager for the Black Craftspeople Digital Archive.