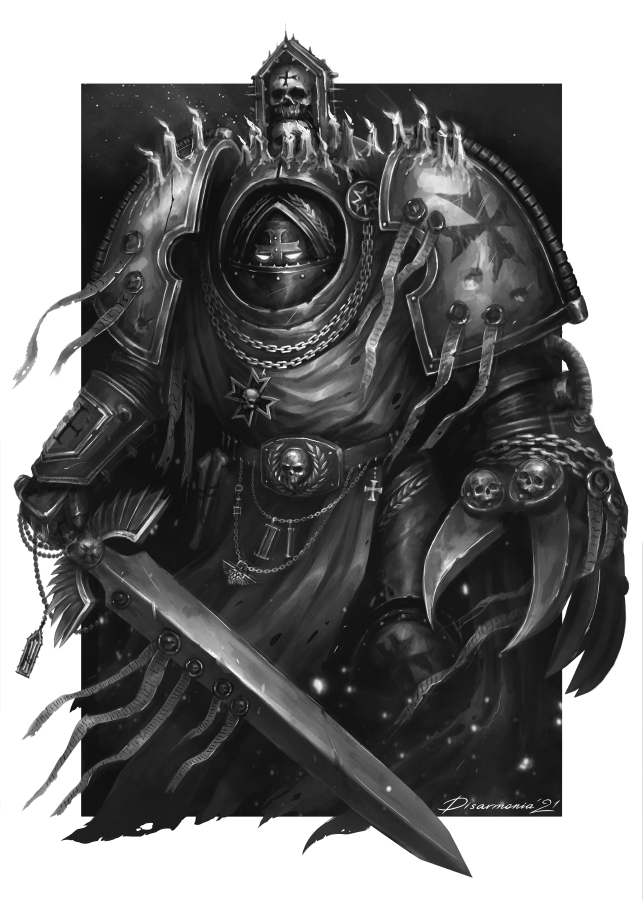 Primarch Rogal Dorn and the Imperial Fists’ gene-seeds carry on in the Black Templars Warhammer 40k 9th Edition Codex army. Originating from the Horus Heresy era, the Black Templars have been on an unending crusade–the longest crusade known to the Imperium of Man, lasting over ten centuries.

What makes Black Templars Warhammer 40k 9th Edition Codex different from other Adeptus Astartes (Space Marines) forces? They worship the Emperor as a literal god. This sets them more in step with the Imperial Cult’s mortals.

Described as “dour champions,” the Black Templars do not use Imperial Fists’ rules. However, they get their own rule set and have unique strengths and tactical advantages. With no homeworld of their own per Sigimund’s wishes, Black Templars establish chapter keeps on other worlds to bolster recruitment, muster fleets and Chapters, and maintain strongholds.

Champions of “mystique and resonance,”

Now, let’s find out if you should be playing Black Templar Warhammer 40k 9th Edition Codex!

Prefer melee combat: Once they are in close range, Black Templars are at their most effective, launching a close-range assault on their opponents.

Love screaming a rallying battle cry: For example, “For the glory of the Emperor!” The Black Templars’ history is underscored by the constancy of loyalty to the Emperor and cause.

Like the look of a regal army and want to paint with blacks and metallics.

Want to play an army that is resilient against Psykers.

Like some units that will chain their weapons to the gauntlets, fighting til the bitter end.

Are fascinated by the concept of crusading through the galaxy for the Emperor.

Would like to play an army that is rabidly loyal to the Emperor, advancing at all costs in the name of victory.

Prefer the lore of bringing light to impure and dark spaces.

“What is your life?

My honour is my life.

What is your fate?

My duty is my fate.

What is your fear?

My fear is to fail.

What is your reward?

My salvation is my reward.

What is your craft?

My craft is death.

What is your pledge?

My pledge is to eternal service.”

What it looks like: Using a zealous battle cry, the Black Templars press ardently forward to engage in the thick of combat in pursuit of victory.

How it works: Use this Stratagem on a selected Black Templars Character or Black Templars Core unit in your army. You must do this during the beginning of the Fight phase. Choose one of the following:

What it looks like: Using an eye-for-an-eye approach, the Black Templars pursue their divine Emperor’s enemies with force matching force, even if they are otherwise at a disadvantage.

How it works: Choose a single Black Templars Core unit in your army. Deploy this Stratagem at the start of the Fight phase. Until the end of the Fight phase, whenever a model does not explode after it is destroyed in a melee attack, roll a single D6. If you get 5 or greater, the enemy combatant model takes 1 mortal wound once its attack is complete. Each unit can suffer no more than 6 mortal wounds per phase due to the use of this Stratagem.

What it looks like: The Black Templars Army has a massive amount of collective fervor, which it harnesses and channels into their forceful strikes, cleaving enemy beings in two.

How it works: Deploy this Stratagem when the Assault doctrine is active for your Black Templars during your Command phase. Whenever a Black Templars model in your army attacks with a Melee or Pistol weapon, add +1 to your Armour Penetration characteristic; this only applies on unmodified 6 wound roll. This Stratagem lasts until the beginning of your next Command phase. Although you may only use this Stratagem one time, it’s cumulative with your Assault Doctrine bonus.

What it looks like: The Chaplains’ heroic voices produce overtones that ring over the battle, inspiring the Black Templars to do their best in combat.

What it looks like: The stores of the Black Templars’ crusade ships are filled with sacred artefacts and blessed weapons.

Champion of the Feast

What it looks like: In an attempt to overtake the successes of other Imperial Fist successors, Black Templar warriors train for endurance, strength, and bravery.

What it looks like: The Black Templars seethe in their hatred of sorcery. They feel so strongly in this hatred that they are less vulnerable to psychic attacks.

How it works: This Stratagem is for use during your opponent’s Psychic phase and can be deployed after they pass a Psychic test for a Psyker unit, and after any Deny the Witch attempt. If you have any Black Templars units within 24 inches of the enemy Psyker, roll a D6. If you get a 4 or higher, the psychic power is canceled.

What it looks like: Valiant crusaders vanquish enemies; they are worthy to carry the holy flame weapons to force the enemy to feel the purification of fire.

How it works: This Stratagem is for use during the Shooting phase. The Stratagem goes into play at the beginning of your Shooting phase and lasts until the end of it. Use this Stratagem with a single Black Templars Core unit in your army. When active:

Whenever a flame weapon from the selected unit targets a unit consisting of 11 models or more, make the maximum number of possible attacks instead of rolling dice to randomly determine the amount of attacks made.

When a flame weapon from your selected Black Templars Core unit targets a unit that consists of 6-10 models, it makes no less than 3 attacks.

What it looks like: Neophytes labor to carry shells into battle. These shells ignite foes with their explosive cores, igniting the Emperor’s wrath on their target.

Given the new Stratagems available in the Black Templar Warhammer 40k 9th edition Codex, what do you think about Black Templars and their righteous, unending crusade? Can you execute the concept in play? Tell us all about it in the comments.