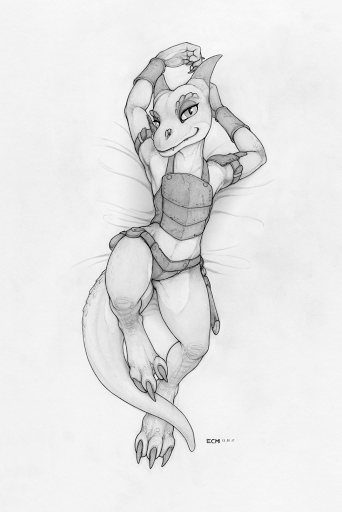 When it comes to fantasy worlds, I think exploring non-human races and cultures is very interesting- biology and magical/supernatural elements means these beings can be very different from our baseline "human" experience, which adds both roleplaying potential as well as game potential for things like rules and background for a game world.

Recently, in some modern D&D lore supplements, the idea of Kobolds being able to switch gender was introduced. This, in my mind, was a very interesting way to make kobolds distinct from other races and humans, and actually makes a lot of sense given the setting- I always imagined kobolds being a bit androgynous in the first place, both in terms of height/strength/looks so it fits that it wouldn't be too destructive or difficult to accomplish in terms of a biological transformation. (I've even written about this before) Kobolds are usually depicted as a bit more lizard-like, who are much more capable of performing a transformation like that compared to a mammal. Kobolds are also often depicted as being highly communal, and the importance of the individual is usually placed underneath the importance of the tribe- both of these would also make sense as cultural elements of a species who can shift and change sex. You give up your own original identity for one that keeps the population of the tribe going even after a disaster. And that final element also ties into it- Kobolds are weak. They are minions or sometimes food for greater monsters, and they die a lot. Evolution shows that creatures with short life expectancy tend to have lots of babies, it's a more r selected species on the sliding scale of quantity and quality.

This leads a lot of doors to potential for interesting character development. My favorite interpretation of this is that it is not a willing or choice to transform, it happens naturally. If you play as a male kobold in a party or mostly male adventurers, your kobold will turn into a girl. It isn't some weird sex thing either, simply being in the presence of males means there is more testosterone in the air then estrogen- this triggers the change to begin. For the character itself; this could lead down a lot of interesting roads. Perhaps they don't really care about the transformation at all, it's a normal part of life for them. Maybe the character is angry or lashes out against these changes, especially if they were raised in a society where the innate ability to change sexes isn't normal, leading to drama.

But there's a bit of a problem with this. Let's get real. There is a group of people, we'll call them those people, who have those politics. If you can't handle spicy political opinions, don't read on.

Basically, some people like the idea of gender shifting or changing stuff in fantasy as a form of wish fulfillment, or worse yet, a intentional political addition. These are inane opinions. But the idea behind genderbending kobolds is still cool- but it doesn't have any bite to it.

See, in my opinion, switching your sex is a big deal. Even in fantasy where magic can be easy or painless; there are so many knock on effects to sex. Sex is an inherent part of what people are; and while most RPGs and video games making a character's sex a purely cosmetic choice, in the fantasy milieu it doesn't really need to be this way. I would find it much more interesting if a character changing sex was a profound thing that really messed up their whole life- and part of this is the fact that kobolds are a bit too androgynous for this to work!

Imagine if you, a female creature, spent your entire life and career as a ammoral vagabond that goes into tombs and explores around as an adventurer. You are skilled at picking locks and mending wounds. Suddenly you begin to bulk up, growing taller and less able to fit into small places. Your hands grow large and hairy and so unsanitary; fingers that once wrapped bandages around your wounded allies are now replaced with large digging and fighting claws- used by males of your species to compete for mates. Suddenly you find your attention span greatly sapped, finding the careful craft of making medicines or repairing machinery impossible or very very difficult. It's a profound part of a character that changes everything, in how they dress and act and are viewed by their society. To simply chalk it up as an "oopsie you're a girl now! :^) " with no mechanical or roleplaying depth makes it nothing more then a pointless cosmetic choice that means nothing.