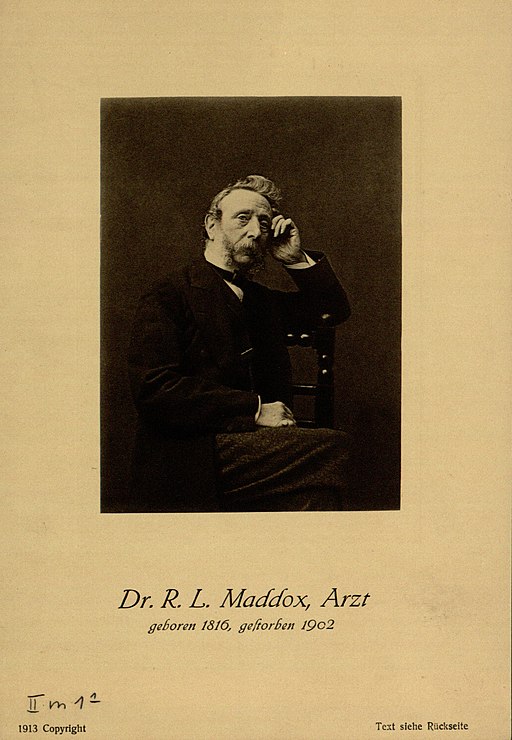 By 1871 having your photograph taken was pretty common place. But a development published that year would lead to a major revolution in making photography easier and more practical. And that where our subject comes in. The man in the photo is Dr Richard Leach Maddox, who came up with this leap.

Five decades had pasted since Niépce made the first permanent photographic images. However the art of preparing your photographic plates was still tricky and required a skill with chemicals. Niépce and the early pioneers used a chemical layered onto metal or soaked onto paper which allowed for image creation.

By 1870 things were a bit better. In 1851 Fredrick Scott Archer produced the first practical wet collodion plate. This allowed photographers to use an emulsion that coated glass plates. These were durable when developed and allowed for multiple prints to made from the negative plate with ease. Wet collodion require a darkroom to be on at hand. You had a matter of minutes to prepare, use and develop your plate.

From this developed more stable dry collodion plates which allowed plates to be prepared in advance. But these were really slow with minutes long exposures and only suited landscape or architectural work. Not that wet Collodion plates were fast – exposure times were measured in seconds. Collodion preparations were pretty toxic and chemicals could be potentially explosive making early photographers experimenters and chemists.

Maddox would start the ball rolling to change that.

Maddox was born in the town of Bath in 1816. His health plagued him throughout his life but as we’ll see this helped to lead to his seminal work. He studies medicine and worked as a doctor (at one point was the private physician to the Duke of Montrose). However he was an enthusiastic photomicrographer. He remains quite reknown for his role in the development of microscopic photography even today

However it’s not his microscopic that we’re focused on. Maddox found the fumes from making collodion emulsions bad for his health. He decided to experiment and come up with his alternative. Having tried a range of substances from tapioca to quince, he picked up a packet of Nelson’s Gelatine Granuals. Mixing it with silver bromide he created a series of plates. These he tested by contact printing from existing negative plates with great success.

Maddox’s discovery would be published in the 1871 British Journal of Photography. Again illness may have played a hand. The Editor J.T. Taylor was ill and asked friends including Maddox to submit articles. Likely this hurried the publication of the technique.

To be fair, Maddox wasn’t the the first to suggest Gelatin for an emulsion. Nor was he the creator of the Dry Gelatin plate. However he published the science that would lead to that massive step forward.

In 1878 Charles Bennett developed the technique further by heating the bromosilver gelatin layer. This increased sensitivity allowing for exposures of just a fraction of a second. He also realised that you could mass produce relatively stable and consistent plates.

This led to a developmental boom in late Victorian photography. The preparation of plates no longer rested with the photographer. Now cameras no longer needed tripods allowing for more instantaneous shots to be taken. Cameras git smaller and more portable. This was even before the next great leap of replacing glass plates. But the story of roll film is a story for another day.

Sadly Maddox died in 1902 at home in Southampton. He was awarded for both his microphotography and contributions to wider photography in his lifetime. He’d been married twice in his life and travelled extensively especially in his younger years. He never directly profited from his experiments and freely published his work.

The post History of Photography by Objects – 9 – A Photograph Of a British Doctor ~1871 appeared first on Canny Cameras.