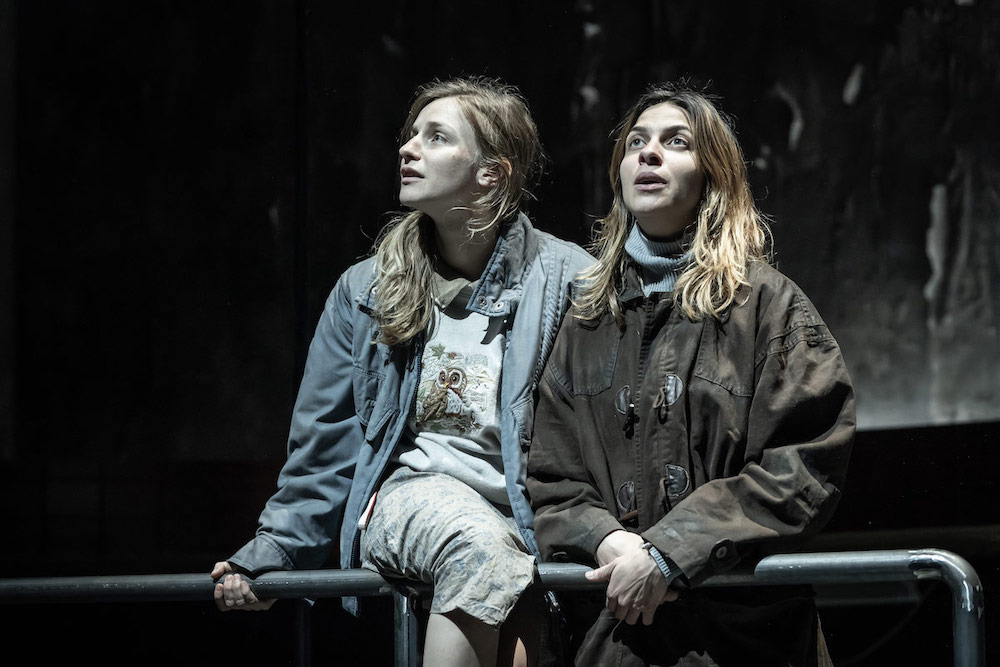 “Europe” at The Donmar Warehouse 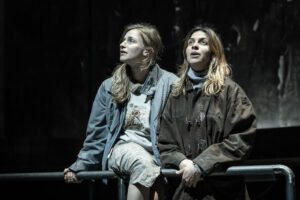 In the middle of the current decade, there was a mild vogue for reviving a handful of the great plays of the 1990s, such as Mark Ravenhill’s Shopping and Fucking and Patrick Marber’s Closer. Now the Donmar Warehouse’s new artistic director, the energetic Michael Longhurst, has chosen David Greig’s Europe, first staged at the Traverse in Edinburgh in 1994, as his inaugural production. Because it’s a kind of state-of-the-continent tone poem, this feels like a really excellent choice. After all, competing views about Europe loom large in the news every day, and in Longhurst’s majestic production this is a play whose time has come yet again.

Set in an empty railway station at an unnamed European border town, the atmosphere is one of dereliction: the trains don’t stop here anymore, and the town is slowly dying. Sava and Katia are refugees who have arrived here and are waiting for the chance to move on: they are in transit. Although Fret, the aptly named stationmaster, isn’t very happy that they are spending the night on his platform, he tolerates them while Adele, his daughter and under-employed assistant, sits on the station roof and watches trains thunder past, wondering about their various destinations. As the two young women slowly grow closer, so do their fathers — both are railwaymen.

Meanwhile, two other characters make their mark. One is Morocco, an international financier, who returns home, and whose best speech applauds the power of money: for him, borders are a “magic money line” — currencies change worth as they move restlessly across the planet. In a wonderful moment, he performs a couple of magic tricks, illustrating how money can shapeshift. The other character is more sinister. His name is Berlin, and he is Adele’s husband. He has been sacked from the local steel factory, and no longer gets on with his wife. In a rundown bar he spends his time with Billy and Horse, his mates, whose resentments pull them into the arms of right-wing, anti-immigrant, ideology.

Although Europe was originally inspired by the fallout from the Bosnian war, its current resonance is clearly much wider, and the text seems shockingly prophetic in its evocation of the more recent migration crises. The central image of an abandoned railway station, where speeding trains never stop, suggests the porous borders of today’s Europe, but also the sense, so common in Greig’s work, that the forces of globalization obliterate all boundaries in their roaring quest for profit. As restless people, like Katia, move across the Continent, they seem to symbolize the contemporary world. But then so do the left-behinds, the angry unemployed workers. They also are Europe.

As the forces of goodness crash into the forces of evil, more sinister images appear: all around the station are dark forests inhabited by wolves, who come down at night to sniff around the station, a potent symbol of a growing fascistic mentality on the continent. Even Fret’s paean in praise of railways, with its imagery of an international body of steel, whose arteries are the tracks, speaks of authoritarian conquest as much as a friendly connection. When Berlin mistreats Adele, Katia befriends her, and their relationship is a tender reminder that human connection is possible. In a play where the names of European cities frequently pepper the text, suggesting the wide expanse of the Continent, it is the small and intimate relationships that are the piece’s central message.

Greig’s text is a modern classic, being impressively precise and perceptive, with its subtle shifts of feeling and its moments of quirky eccentric comedy. The effect is a marvelous mixture of political writing and profound emotional shading, both of which are perfectly well served by Longhurst’s powerful production, helped by Chloe Lamford’s symbolic and versatile design, which is both brutal and tender. And this is exactly the right sensibility to bring to the piece. Beginning each of the two acts with a sung, rather than just spoken, chorus, his casting and work with the actors is excellent.

Ron Cook’s Fret is at first a bustling bureaucrat, a comic turn, then mellows into a kindly friendship with Kevork Malikyan’s wise and the good-humored Sava. Faye Marsay’s naïve Adele makes a lovely contrast with Natalia Tena’s worldly Katia, while Shane Zaza’s wily Morocco is both charming and vulnerable. On the more vicious side, Billy Howle (Berlin), Theo Barklem-Biggs (Horse) and Stephen Wright (Billy) are strong enough to effectively chill the blood. With a thumping ending to Act One, greatly helped by Ian Dickinson and Simon Slater’s exciting soundscape, and a dazzlingly incendiary and thoroughly theatrical climax, this is a brilliant revival and a magnificent way of beginning a new artistic regime. And I also really enjoyed the Balkan turbo folk music that plays in the theatre. This is the hottest show in town.

Europe is at the Donmar Warehouse until 10 August.

This article originally appeared in www.sierz.co.uk on June 27, 2019, and has been reposted with permission.

The full version of the article “Europe” at The Donmar Warehouse is available on The Theatre Times.

“Europe” at The Donmar Warehouse