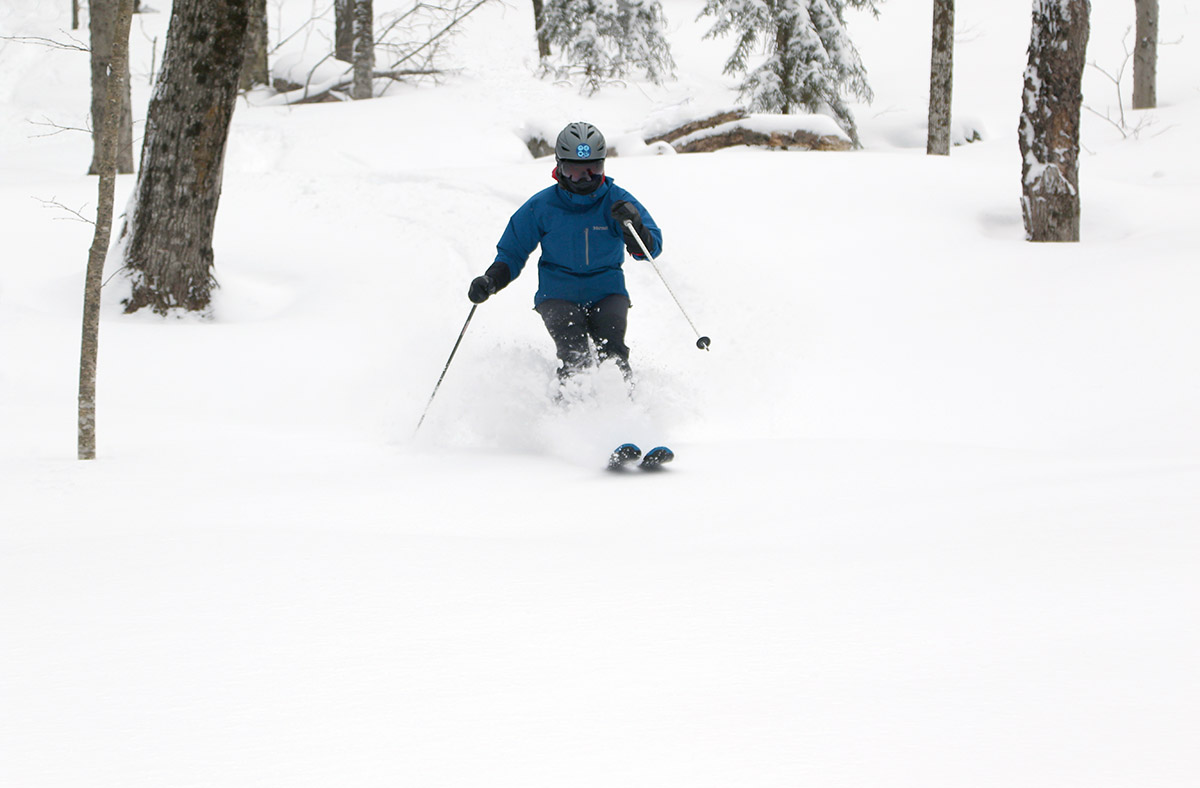 Today was the day after the storm (Winter Storm Quinlan), and the weather had settled down.  E and I headed up for morning turns at Timberline, and the conditions were great.  It was still cold by March standards, somewhere in the teens F in the morning.  The storm total reported by Bolton Valley was around 18 inches.

We spent our entire morning at Timberline, and just stayed there since there was plenty of snow even down to 1,500’, and there was still some wind around as we hit 2,500’.  My depth checks generally revealed about 12” of new snow after settling down in the Timberline  elevations, which with the density at the beginning of the storm was plenty to cover most on piste terrain.  Initially, the headwalls of the steepest terrain areas were closed, since they had been scoured by the winds and thus not covered as well as they otherwise would have been.  The traverses below them were in good shape though, so that gave you access to run after run of untracked powder on trails like Spell Binder.  Eventually, patrol even opened the Spell Binder headwall, but you had to be quite cautious going down the most scoured sections.

For off piste runs, you had to know the areas with good base depths, but the skiing in those areas was excellent.  The usual steepest areas were still sketchy of course, as one storm can only do so much to cover up areas with poor base depths.  E and I had a great run in the lower KP Glades, and when we showed it to Dylan and Parker once they arrived it the early afternoon, they were pretty impressed with the conditions as well.  E and I left around 1:00 P.M., but the boys did a lot of off piste exploring in the afternoon, and my Dylan’s ski got a solid core shot to show for it.

“My depth checks generally revealed about 12” of new snow after settling down in the Timberline elevations, which with the density at the beginning of the storm was plenty to cover most on piste terrain.”

The parking lots up at the Village were already full when we arrived in the morning, so the Timberline Quad had intermittent periods with a lift queue as the people arriving made their way up to the main mountain, but thankfully those died off as people dispersed.  Bolton opened the new expansion to the Timberline Lodge for the first time this weekend, and it looks quite nice.  I hear they are also going to use it as rentable space for conferences and events, but it’s going to be a great addition to the space in the lodge.​