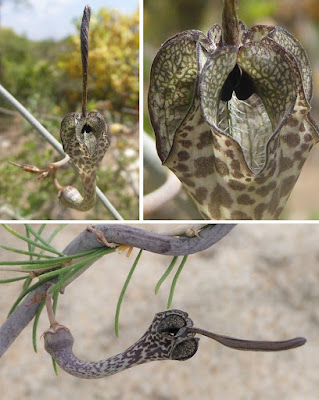 Abstract
The new species Ceropegia longirostris Thulin, M.G.Gilbert & Kaariye is described, illustrated and mapped. It is known from two localities, one on gypsum in the Somali National Regional State (Ogaden) in southeastern Ethiopia and one, based on a photographic record, from just east of Lake Turkana in northwestern Kenya. The new species is a member of C. sect. Phalaena H.Huber, and is distinctive by having flowers with the corolla glabrous outside and apically with a long narrowly clavate beak abruptly delimited from the rest of the corolla, and with each lobe of the corolla having a prominent wart-like blackish projection near the tip on the inside.
Keywords: Apocynaceae, Ceropegia sect. Phalaena, Ethiopia, gypsum, Kenya, taxonomy
Ceropegia longirostris Thulin, M.G.Gilbert & Kaariye
A species that differs from Ceropegia somalensis Chiov. by having a corolla that is glabrous outside (versus shortly and densely pubescent all over the outer surface), 7–8 mm (versus 12–16 mm) wide at the mouth, with wart-like projections ca 1.3 mm long on the inside of the corolla lobes below their point of fusion (versus sometimes having smaller or rudimentary knobs), the lobe margins recurved and auriculate at the sinus (versus flat), and with the tips of the corolla lobes twisted together or closely cohering to form a narrowly clavate, 16–20 mm long beak that is abruptly delimited from the rest of the corolla and sometimes more or less geniculate at the base (versus a beak more gradually delimited and loosely twisted above to form a secondary upper ‘cage' or occasionally uppermost part of corolla lobes absent).
Distribution and habitat:
Ceropegia longirostris is known from only two localities, one in Ethiopia and one in Kenya (Fig. 4) and some 900 km apart. The type locality in Ethiopia is situated east of Kebri Dehar in the Somali National Regional State (previously Harerge Region) in an area called Ceelxaar. The species is found in a small gypsum outcrop surrounded by silty or sandy ground, in a vegetation of open Senegalia–Vachellia–Commiphora bushland at an elevation of 500–550 m a.s.l. The locality is also the type locality of C. gypsophila Thulin (2009) and Commicarpus ogadenensis Thulin (2021), and other more or less local gypsum endemics found there are Kleinia gypsophila Lebrun & Stork and Euphorbia suborbicularis Thulin.
The locality in Kenya, Ileret just east of Lake Turkana, is situated within the Sibiloi National Park. This is an UNESCO World Heritage Site since 1997, famous for its important archaeological sites, such as Koobi Fora, with rich findings of fossils of early hominids. We have no direct information on the habitat of the Kenyan locality of Ceropegia longirostris, but presumably it is open bushland on gypseous ground at ca 400 m a.s.l. It is very likely that further populations of the species exist and it should be searched for in other areas of gypsum at similar elevations in southern Ethiopia and northern Kenya.
Mats Thulin, Michael G. Gilbert and Hassan Y. Kaariye. 2021. Ceropegia longirostris sp. nov. (Apocynaceae–Asclepiadoideae) from Ethiopia and Kenya. Nordic Journal of Botany. DOI: 10.1111/njb.03416
Source: novataxa