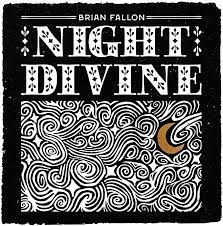 Ever since Gaslight Anthem broke through with their second record The 59 Sound it has been known that mailman Brian Fallon had an affinity with Christianity. However, aware that there were two Jews and a Buddhist in his band he didn’t pack the Christian theology in his songs of a U2.

His new solo record Night Divine changes that. In this album, that is part Christmas Carols, part everyday hymns, Fallon is doing his mother’s hymnbook habit like Johnny Cash did during his American Recordings!

For Fallon though, it wasn’t just an opportunity to share his faith. This was a needed time, as the bluesman once put it. In Coronavirus Times, Fallon felt his own need to lean in on his faith, a comfort through tough times. As these songs are for Fallon they can be for the listener too.

It is not the usual Fallon soundscape. These are melancholic arrangements that bring an imperfect shadowy worldly reality rather the perfectly lit and all cleaned up Cathedral bubble versions. It is melancholic lament with a deep cathartic feeling as a result.

Scattering five hymns in among the five carols works a treat. The hymns seem particularly chosen for the hard times - Amazing Grace, Nearer My God, Leaning On Ever Lasting Arms. Sweet Hour Of Prayer and The Blessing. The Blessing washes over like a benediction prayer should, giving confidence for what comes next.

The Carols all sound Campfire organic, unadorned but for the perfect pedal steel grace note as in The Angels We Have Heard On High. A beautiful electric guitar that sounds like it’s being played in a stable lifts O Holy Night but it all still sounds like a weary world rejoicing, as of course it should! Silent Night is as calm and bright as such a night would have been.

I was particularly taken by Virgin Mary Had One Son. Apparently Odetta’s version inspired Fallon to learn piano. Joan Baez covered back in the day which makes sense to me. It’s got a protest era vibe. I really didn’t know it and loved the declaration:

“Some call Him one thing,

It’s the lead off track. It lays out the robust hope that all other songs are resting on as we lean in for something strong to see is through bizarre times.

A spiritual classic I suggest!