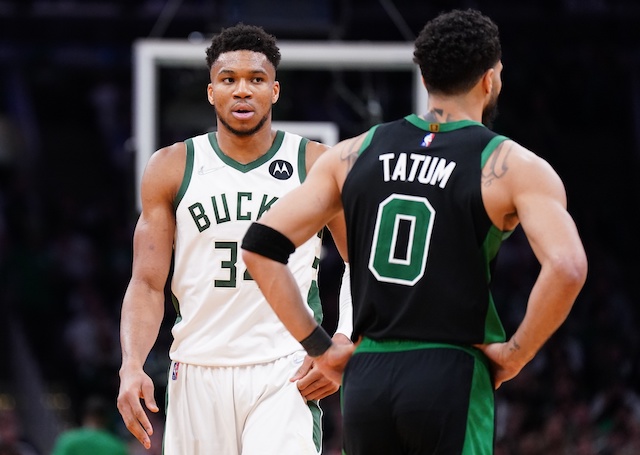 A change of guard is taking place in the NBA, as shown by the 2021-22 All-NBA Teams selections.

For the first time since 1954-55, only players age 27 or younger have made the All-NBA First Team. Giannis Antetokounmpo, the oldest of the bunch at 27, led the way after receiving 100 first-team votes to rack up the maximum of 500 points.

Interestingly, Joel Embiid racked up more points (414) and first-team votes (57 to 49) than Tatum. Yet, the Philadelphia 76ers star landed on the All-NBA Second Team because he came second to Jokic among centers in the voting — leading to the Denver Nuggets phenomenon taking the big man slot on the All-NBA First Team.

LeBron James is the only Los Angeles Lakers player to have earned an All-NBA honor this year. The 37-year-old made the All-NBA Third Team after receiving two first-team, 35 second-team, and 54 third-team votes to amass 169 points.

He was the only player on the All-NBA Third Team to pick up at least one first-team vote.

James was joined by Karl Anthony-Towns, who garnered five points more (174) than the Lakers star, as well as Chris Paul, Trae Young and Pascal Siakam.

James has earned his 18th All-NBA selection in a row, extending the NBA record for the most All-NBA honors of all time. The Lakers All-Star leads Kobe Bryant, Tim Duncan and Kareem Abdul-Jabbar, who each made the cut 15 times in their respective careers.