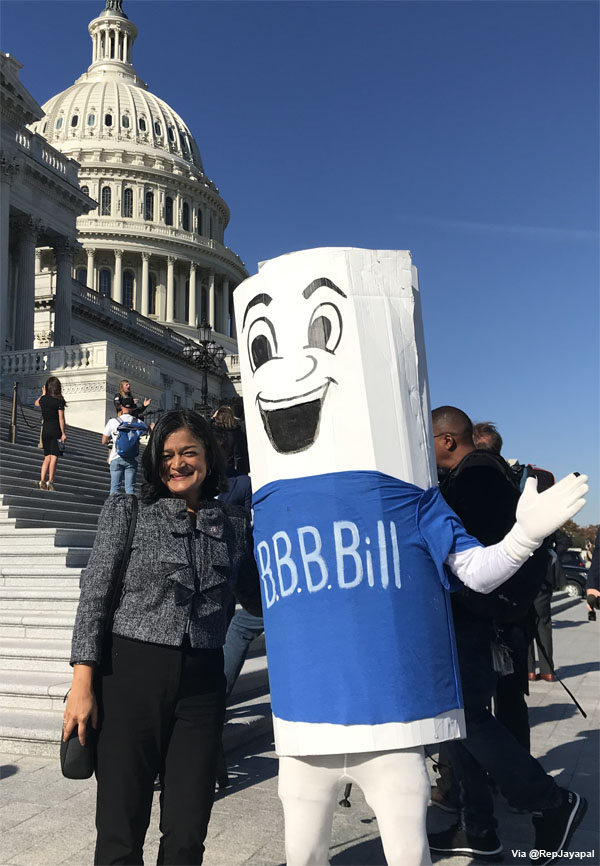 “This bill is one of the most transformative investments in our country’s history,” said AFL-CIO President Liz Shuler in a statement released Friday morning that several of the bill’s features. “And it will hold accountable employers who attempt to union-bust with real, substantive financial penalties, making this the most significant advancement for the right to organize since passage of the National Labor Relations Act in 1935.”

The Build Back Better Act includes the following investments:

Universal Preschool for All 3- and 4-Year Old Children — $400 billion for childcare and universal preschool that expands access to free, high-quality preschool for more than six million children.

Affordable, High-Quality Child Care — $400 billion for universal preschool and high-quality child care that limits childcare costs to no more than 7 percent of income for families earning up to 250 percent of state median income. This will expand access to around 20 million children.

Paid Family and Medical Leave — $194 billion to provide four weeks of paid family and medical leave to people across America for the very first time.

Home and Community Based Care — $150 billion for affordable, high-quality care for hundreds of thousands of seniors and people with disabilities. This will allow people to stay in their homes and communities by strengthening an existing program through Medicaid and ending the backlog while improving working conditions for home care workers so they make $15 an hour.

Health Care, Medicare Expansion, and Lowering the Cost of Prescription Drugs — $165 billion for making health care more affordable and accessible for millions of people. This includes allowing Medicare to cover hearing benefits for the very first time ($35 billion) and lowering the cost of prescription drugs. It also includes Affordable Care Act tax credits ($130 billion) to cover three million people who would otherwise be uninsured and to make tax credits available through 2025 to four million uninsured people in uncovered states.

Affordable Housing — $150 billion for building, preserving, and improving more than one million affordable rental and single-family homes including public housing.

Leveling the Playing Field By Making Corporations and the Ultra-Wealthy Pay Their Fair Share — While not raising taxes on small businesses and anyone making less than $400,000, the legislation includes a 15 percent Corporate Minimum Tax on large corporations and a one percent surcharge on Corporate Stock Buybacks. It also invests in IRS enforcement and includes a Global Minimum Tax and other provisions to stop rewarding corporations for shipping jobs overseas. Additionally, it asks the highest income Americans to pay their fair share with a new surtax on multi-millionaires and billionaires and other provisions.

This bill is one of the most transformative investments in our country’s history. We know that for too long the status quo has benefited the wealthy few and left the majority without access to basic necessities, including high-quality, affordable child and elder care, health care, and housing. This legislation will knock down the barriers that have prevented so many workers, especially women and people of color, from finding high-quality sustainable jobs. The Build Back Better Act will remake and redefine our economy , and it is the largest-ever investment in clean energy, with domestic content and high labor standards required across the board. This is how we fight climate change the Biden way—with good union jobs.

This legislation will improve our immigration system by easing the burden for those who want to call America home. And it will hold accountable employers who attempt to union-bust with real, substantive financial penalties, making this the most significant advancement for the right to organize since passage of the National Labor Relations Act in 1935.

Now it is the Senate’s turn to act. The AFL-CIO and its 12.5 million members are organizing, we are mobilizing, and we will not rest until the Senate passes the Build Back Better Act.